Review: Upright Go 2 tells you to sit up straight for better posture

AppleInsider
Posted: May 1, 2021 8:29PM
in General Discussion
The Upright Go 2 aims to help you sit up straighter and reduce your back pain with a clever, tiny wearable that tells you to stop slouching. 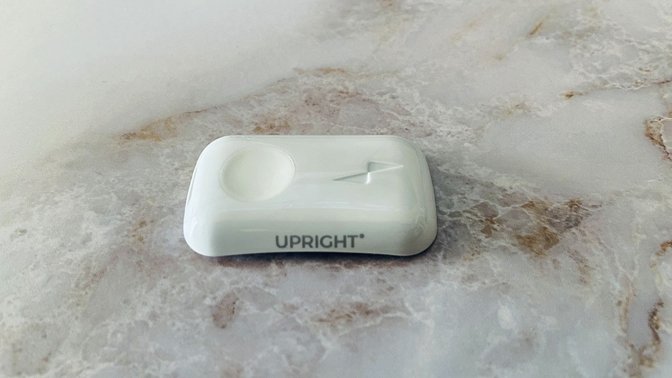 If you work at a desk, it's probable that you don't have the best posture. Tech users tend to hunch over our keyboards, our phones, and our iPads, and our backs tend to pay the price.

Not only is poor posture a leading cause of lower back pain, but it has been shown to cause nerve damage in the neck, chronic headaches, and can even disrupt digestion.

The folks at Upright have come up with a way to help you learn to adopt better posture, through gentle corrective training.

The Upright Go 2 and its predecessor, the Upright Go, work by sticking to the spot between your shoulder blades, where they actively monitor your posture. As you go about your day, the tiny device will vibrate whenever you slouch for too long, reminding you to straighten your back. 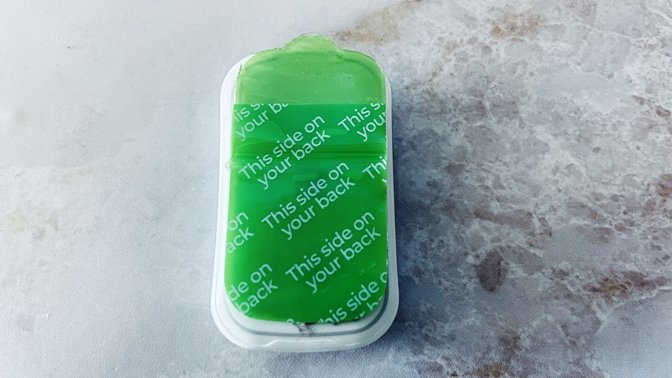 This is an excellent idea for those of us who work long hours at a computer desk, as many of us have adopted poor sitting positions while working.

To stick or not to stick

There are a couple of different ways you can wear the Upright Go 2, with each having their own pros and cons.

The first way is by adhering it to your skin with a semi-reusable bit of adhesive. The adhesive is silicone-based, so it shouldn't cause any skin irritation to individuals, even if they're prone to adhesive allergies.

I have both an allergy to latex, as well as acrylate -- a standard adhesive in tape and stick-on bandages -- and didn't have any problems with the adhesives used on the Upright Go 2.

The downside is that they're only semi-reusable, as each sticky pad can be reused anywhere from 3 to 10 times. Naturally, the milage varies wildly between users.

I found that I could reuse the adhesive about four to five times before it needed to be replaced. Of course, this doesn't account for times when I didn't position it correctly and needed to reposition it, which felt like a bit of a waste.

There is also some concern about the Upright Go 2 falling off toward the end of the adhesive's lifecycle. It's not a "cheap" device, so the thought of dropping it and losing it in a car seat or couch cushion can be worrying.

A pack of 10 adhesive pads (which should get you anywhere from 30 to 100 additional uses) costs $9.95, with the company providing free shipping. 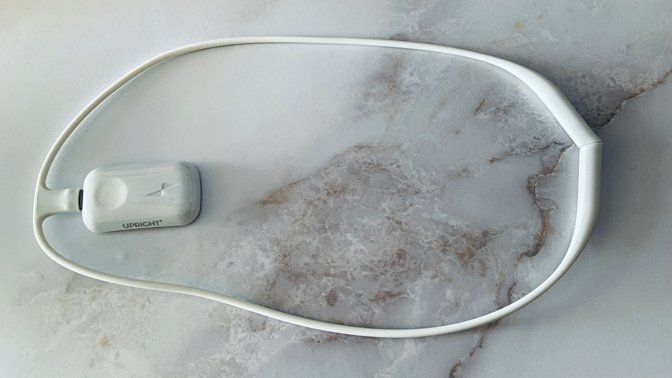 The necklace clips into the USB-C port, holding the Upright Go 2 in place

The second method is by using a silicon necklace to hold the Upright Go 2 in place. By clipping the necklace into the Upright Go 2's USB-C port, it essentially becomes a pendant that you wear backward between your shoulder blades. The necklace has a magnetic closure at the front, making it easy to put on or take off.

I found this to be my preferred method, though it's not a perfect one. First, the Upright Necklace is an additional $20 if you decide you want the extra accessory at a later time, which feels a little expensive for a piece of silicon with an unpowered USB-C plug in it.

The second major issue is the design. While I think it's fine enough, it does seem to air a little more feminine, which may not be everyone's style.

Additionally, because it's a silicone necklace, it's not exactly a traditional piece of jewelry. It stands out -- a lot. This is mainly due to the shape, which people seemed to find strange.

While wearing mine, I got several questions about it from passersby, which may not bother some people. However, it can lead to a rabbit hole of questions when you're simply trying to go about your day.

Otherwise, the necklace is likely going to be more cost-effective in the long run. It doesn't require me to stick something to myself, and it keeps the device just as secure -- if not more.

Of course, this is primarily a personal preference, and you can also mix and match between using the adhesives and using the necklace too.

To get the most out of your Upright Go 2, you'll need to use the Upright Go companion app. 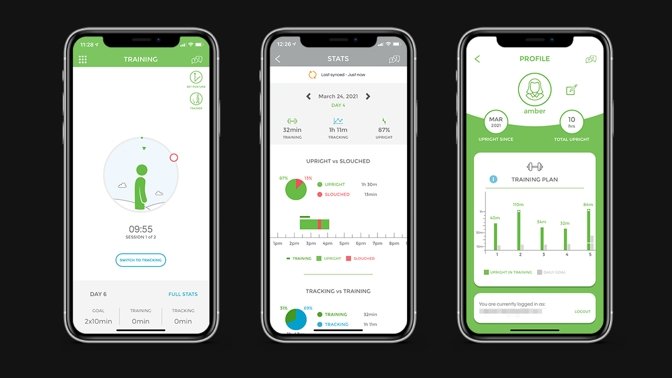 I was genuinely impressed with the app. It's easy to navigate, features intuitive training programs, and displays your progress in a very easy-to-understand way.

It even allows you to order more adhesives right from within the app.

Like any good habit, learning not to slouch will take a fair amount of time and effort on your behalf if you really want to get your posture back in line.

The Upright Go 2 helps by gently reminding you when you lean too far forward and hunch over your keyboard or while you're watching TV. The little buzz tells you, "Hey, it's time to sit up straight."

On top of that, using the tracking feature allows you to see how many times a day you slip up at times it isn't actively reminding you to sit up straight. For instance, I learned that I tend to slouch more toward the end of the day, or any time I feel stressed or rushed.

Being able to recognize when I'm more likely to slouch means I can take active steps to reduce it.

Should you commit to using the Upright Go 2, it's a great training aid, but it requires users to use it consistently. 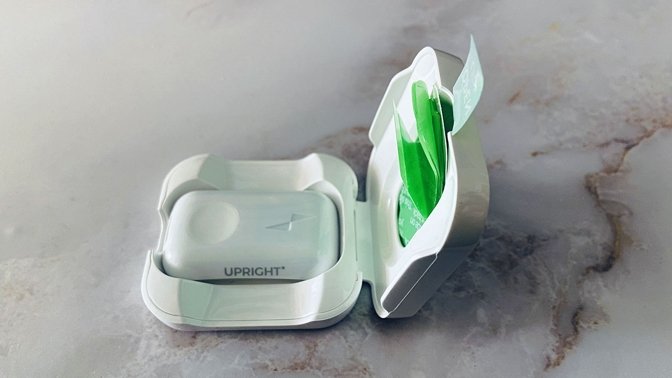 The convenient case keeps your adhesives and Upright Go 2 together

Additionally, there are a few things you should be aware of when you use it.

Because the Upright Go 2 actively monitors your posture, it can run its battery down pretty quickly. Upright says that it gets a battery life of up to 30 hours, but the app will suggest that you charge it daily.

You'll probably need to get into the habit of charging it every few nights if you plan on using it a lot.

If you wear a shirt with a low-cut back, it may be visible if you don't have hair that's long enough to cover it. This isn't a major issue, but people may ask what is on your back and why.

The vibration, while adjustable, is not discreet, as it's very audible even on the lowest setting. You'll want to skip wearing it to job interviews, board meetings, libraries, or first dates.

Lastly, be aware that the small size can be both a blessing and a curse. Sure, it's small and doesn't draw attention to itself, which is great until you lose it on a messy desktop.

Learn from our mistakes and get into the habit of putting the Upright back into its case at night, then keeping the case in the same spot every time.

We like the Upright Go 2, but the high cost does hold it back from being a must-have device. Compared to other fitness companions, such as the Fitbit Inspire 2 with its step, menstrual, heart rate, sleep tracking, and clock for $80, a one-trick pony like the Upright Go 2 posture monitor seems very expensive.

We hope to see price drops closer to the $60 or $70 range with future iterations.

If you're interested, you can head to Amazon where you can pick up an Upright Go 2 for $99.99,