AppleInsider
Posted: September 21, 2021 12:45PM
in Future Apple Hardware edited September 21
A future version of the MacBook Pro could have a considerably larger trackpad, one that occupies the entire surface below the keyboard. 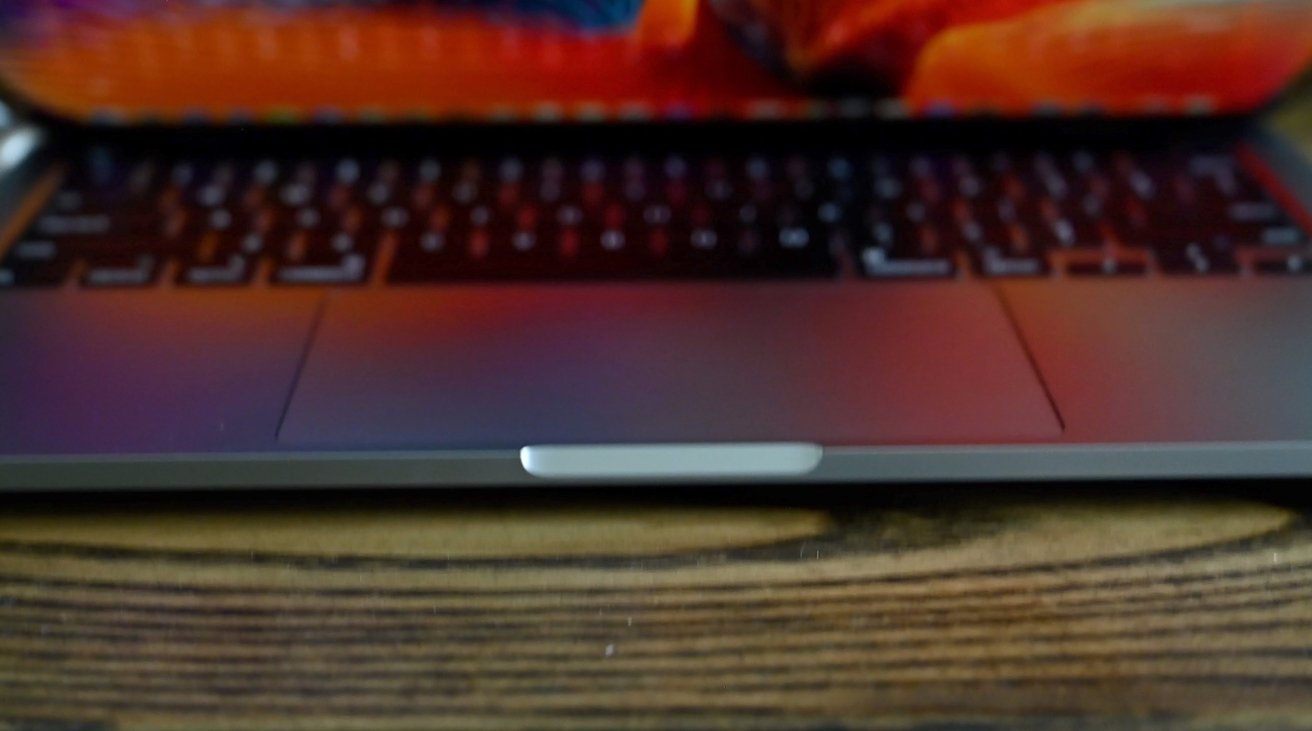 Apple's trackpads in its MacBook Air and MacBook Pro lineup are already quite large examples of the built-in peripheral, with the generous space used to provide users with more precision and usable area to move the cursor around.

While it seems that the trackpad is already big enough for many users, Apple may be thinking bigger, into allowing a larger space to be used as a trackpad than is currently offered.

This could be handy from a usability standpoint, as a centrally-aligned trackpad may require users to move their hands a bit far from where they are usually positioned for typing. A bigger trackpad could help shorten the distance, and in turn speed up a user's processing of a task.

In the patent granted to Apple by the US Patent and Trademark Office on Tuesday titled "Systems, methods, and computer-readable media for handling user input gestures on an extended trackpad of an electronic device," Apple suggests that the trackpad could go beyond the existing visible boundary, and into other areas of the MacBook enclosure.

The patent largely deals with methods for monitoring a trackpad, specifically in the creation and monitoring of multiple interface sections. This could take the form of the entire sub-keyboard surface becoming a trackpad, but with the central section being a primary trackpad area. 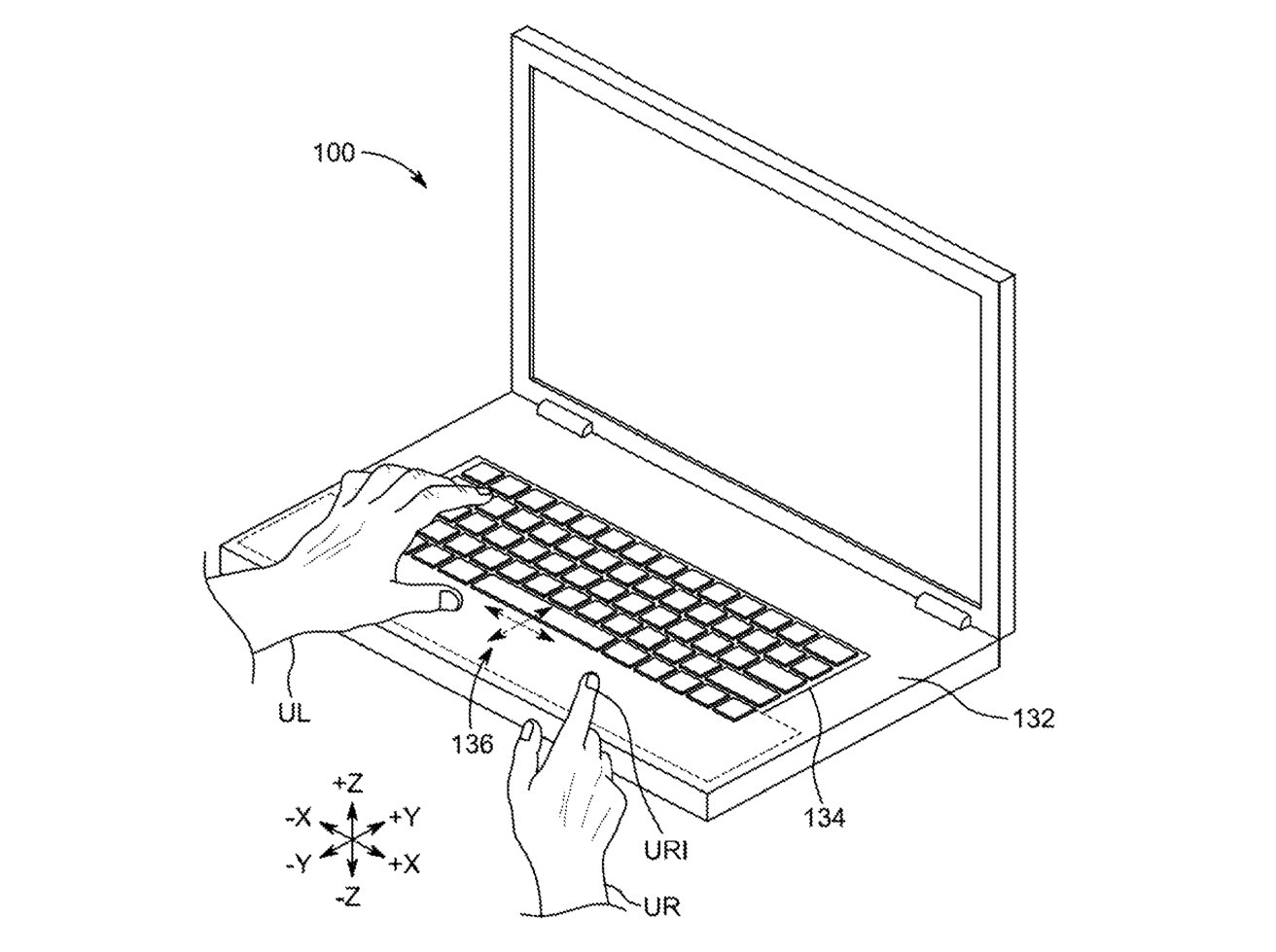 A future trackpad could take up the entire space below the keyboard on a MacBook Pro.

To the sides, could be secondary and tertiary trackpad areas that, though not necessarily used all the time, still offer functionality when required.

The system then could detect if a thumb or finger is being used on this extra trackpad area, which then opens it up for use as a trackpad, or for gestures. This could be useful as a means to prevent accidental activation by a user resting the base of their palm on the activatable surface.

Detecting if it is a finger or thumb could also be useful, as the extra trackpad area could be used for different actions depending on whether a finger or thumb is used. Detecting different types of interaction in the various usage areas could potentially allow gestures and movements to be used at the same time, like an enhanced gesture.

These may also be conducted as a force touch gesture, rather than simply detecting a light touch with a finger. This too could be used as a determinator between an intended gesture by the user and an unintentional resting-hand action. 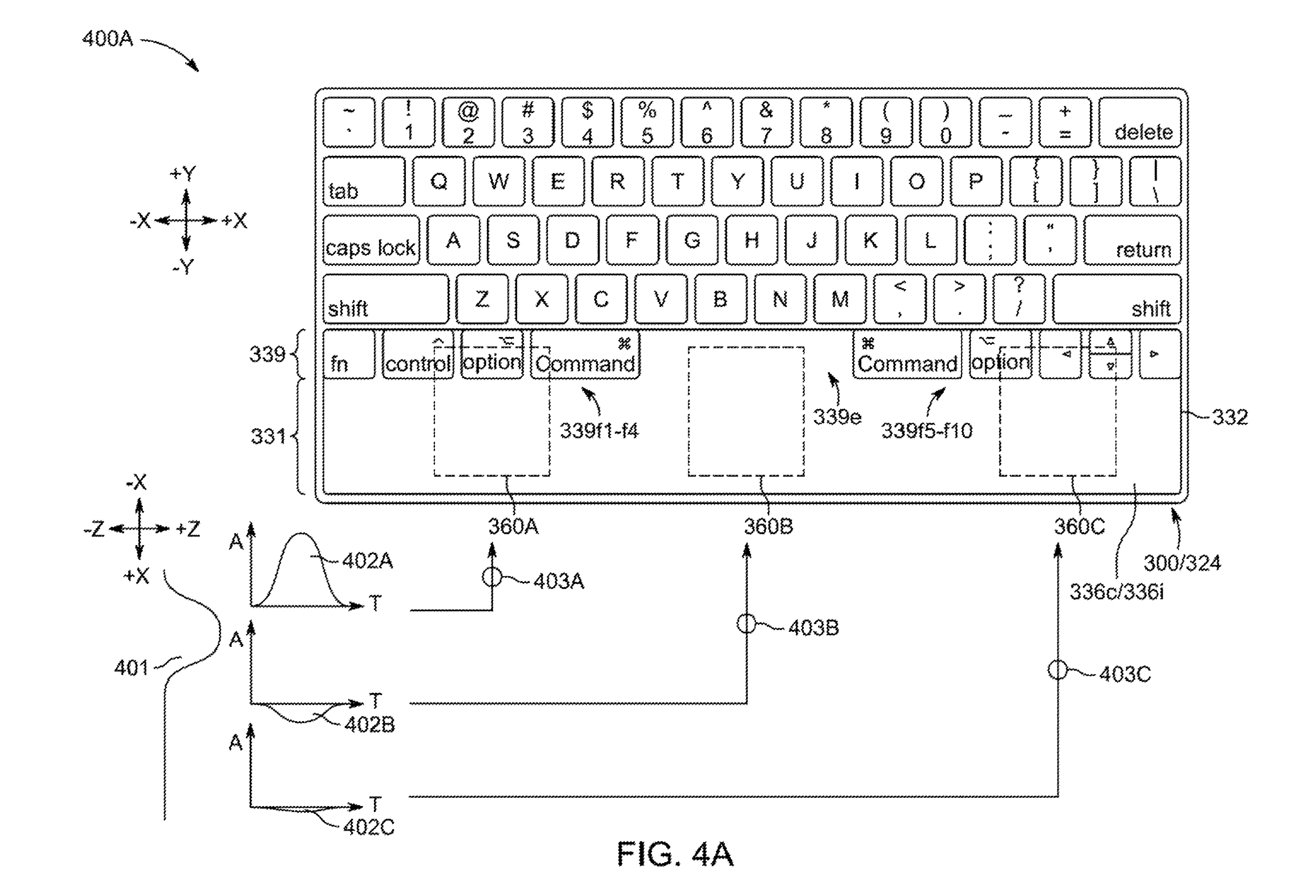 Apple files numerous patent applications on a weekly basis, but while the existence of a patent indicates areas of interest for the company's research and development work, it doesn't guarantee the concept will appear in a future product or service.

This is far from the first patent or application where Apple has considered making the trackpad larger. In 2020, it gained a patent for an "Illuminated device enclosure with dynamic trackpad," which grew the size of the trackpad area with light-up sections indicating new touch input sections.

It has also looked into creating a "keyless keyboard," namely a MacBook that uses two displays, with one as a multi-sensing touchscreen with software keyboard, and the other acting like a conventional display.

Screens also appeared in a March 2020 patent, where screens could be included in the trackpad. This could feasibly introduce Touch Bar-style features like autocorrect suggestions, without using a separate display strip.

The keys have also been a target for potential trackpad usage, with an August 2020 patent suggesting the keys could have touch sensors, making them a trackpad in their own right.