AppleInsider
Posted: November 28, 2021 6:17PM
in General Discussion edited November 2021
The HexGaming Ultimate Controller lives up to its name with a fully-customizable design, swappable joysticks, and programmable paddle buttons. It also happens to be compatible with Apple's well-connected ecosystem. 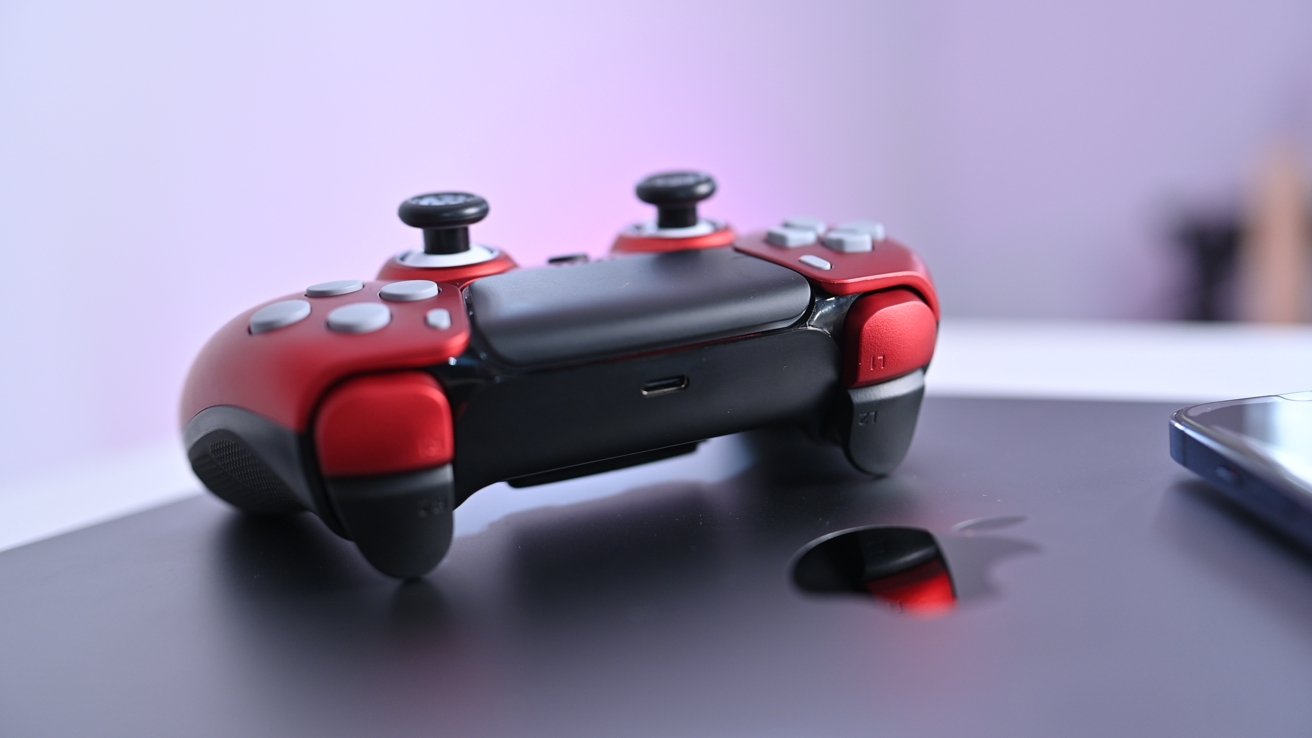 The front of our customized HexGaming Ultimate Controller

If the HexGaming controller looks familiar, it may be because it's not a wholly unique creation. The company starts with a legitimate Sony PlayStation 5 DualSense controller and then modifies it from there. 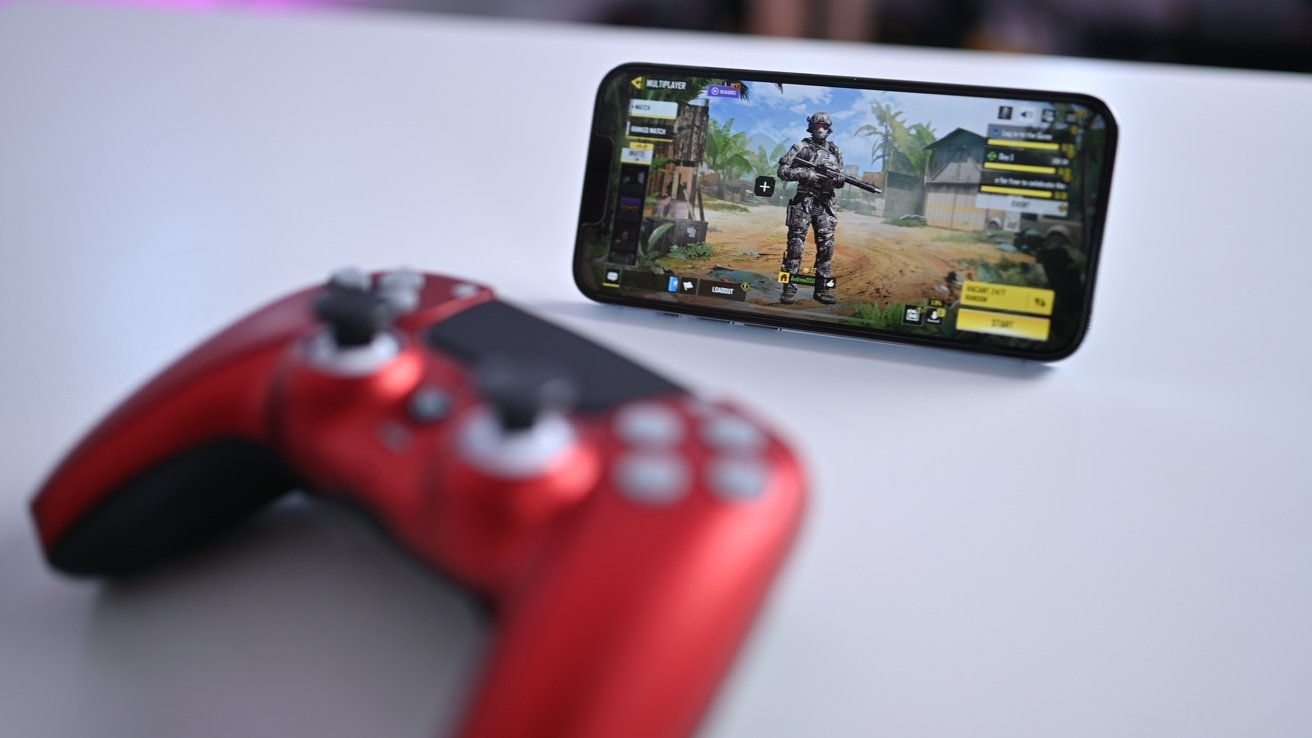 Playing Call of Duty with the HexGaming controller

So from a high level, the great experience that you when have gaming with a DualSense controller, you'll also have with the HexGaming Ultimate.

Sony's controllers also have the benefit of being fully MFi certified to work with Apple devices. You can use the HexGaming Ultimate Controller with your iPhone, iPad, Mac, and Apple TV. 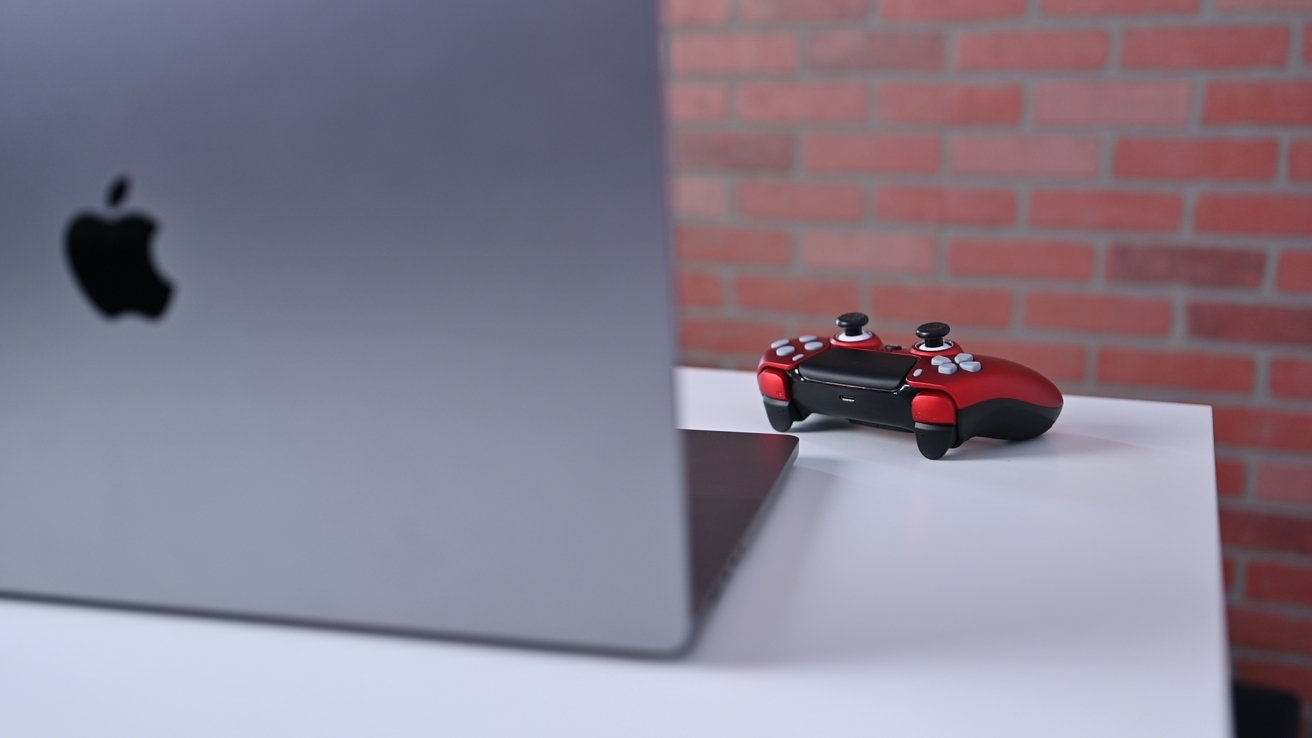 HexGaming controller works with the Mac

We've gone in-depth on pairing the DualSense controller with your Apple gear, but the process itself is straightforward to pull off.

To pair your controller 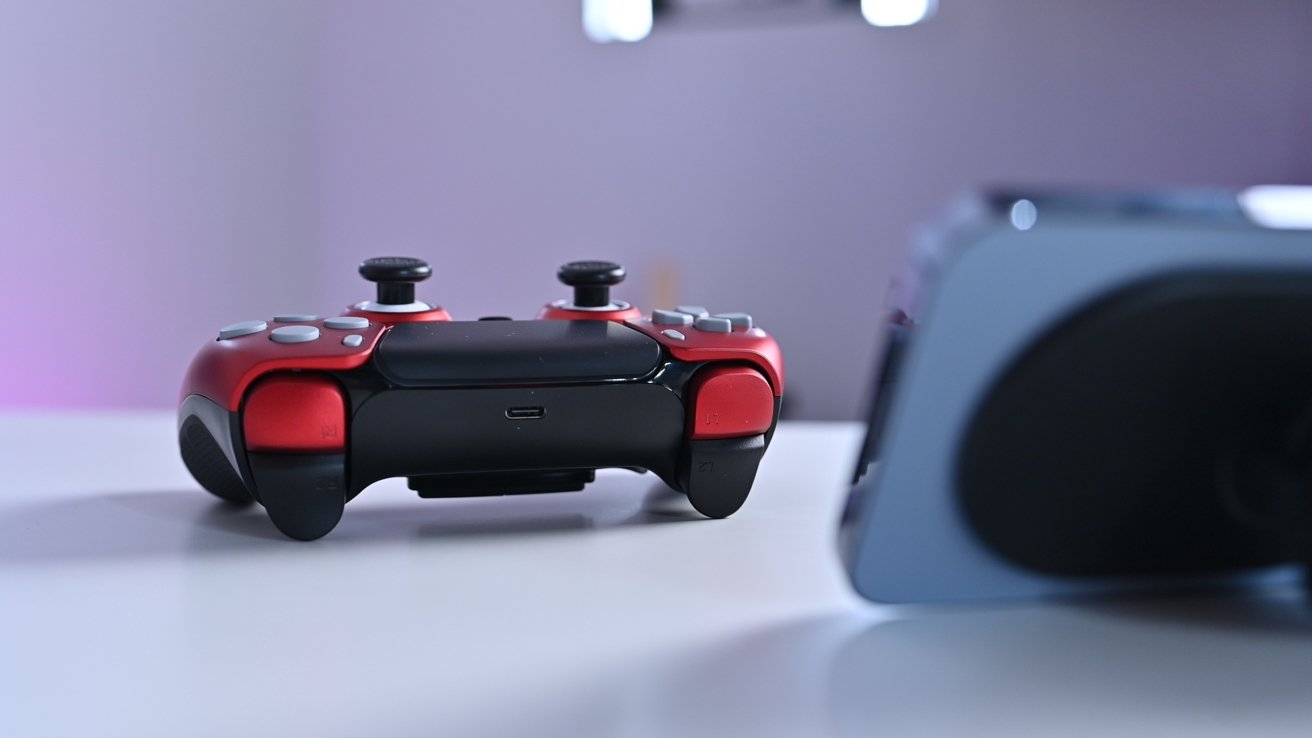 HexGaming modifies a standard PS5 DualSense controller by creating a custom color scheme, adding swappable joysticks, and installing programmable paddle buttons to make this your go-to controller. Be it for relaxing with Call of Duty or competing in a high-stakes tournament.

Customization is a substantial part of the HexGaming Ultimate Controller. It touches every aspect of the experience, from choosing the design you like to the grip texture (or lack thereof), to the comfort, to what actions buttons trigger.

When designing the controller, you have seemingly endless options to choose from, as each piece of plastic on the controller can be modified. That includes the touchpad, the directional pad, the round buttons, the triggers, the top plate, the joysticks, the joystick collars, and more.

With each change from the stock configuration, your price is adjusted as well. When going the build-your-own route, you can easily jump the price substantially or show restraint and keep the price reasonable.

As an example, changing the D-pad color from black to silver will tack $2.99 onto your total. But do the same with the options/share buttons, front plate, touchpad, and you're already up to $24.

The more you modify, the higher the price. It does help that a running total on the customization page helps you to understand these additional costs. 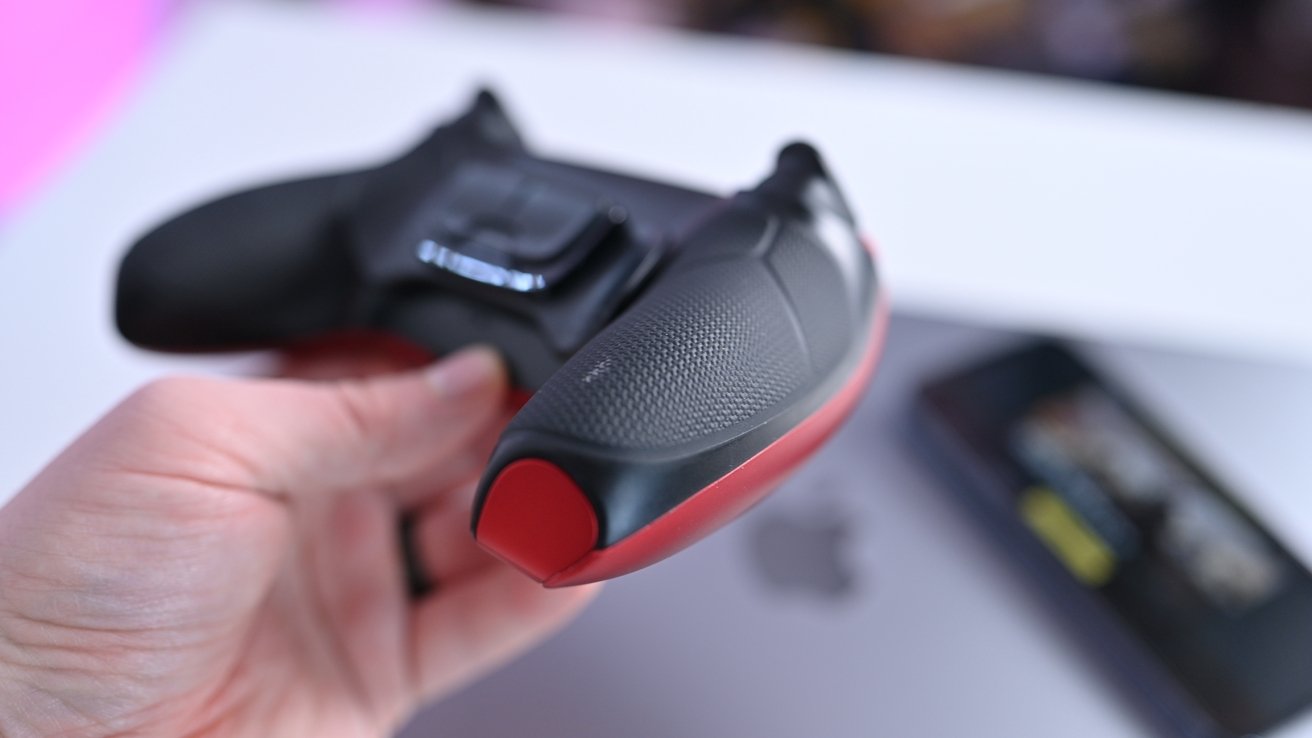 Many customizations are purely cosmetic, but the grip on the controller has further implications for comfort.

On the back of the controller, the default is a plastic grip with a light texture. Among HexGaming's options are a rubberized grip or a texture black paint. 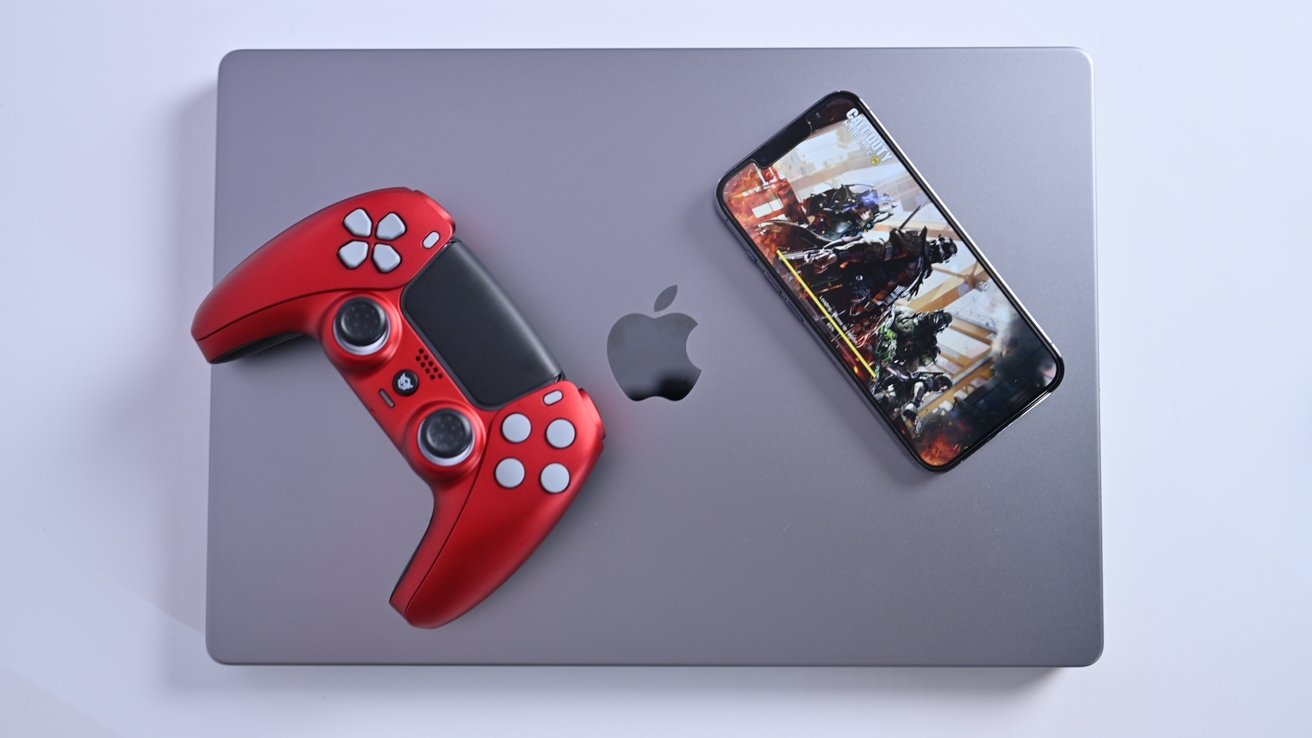 Up your game with the HexGaming Ultimate controller

We prefer the rubberized grip, which is what we chose. In our time playing with the controller, it has proved to be very comfortable but also aids in gripping the controller.

Even without design customization, the HexGame Ultimate Controller comes with new rear-facing paddle buttons installed. There are four buttons in total, with a customization button in the center. 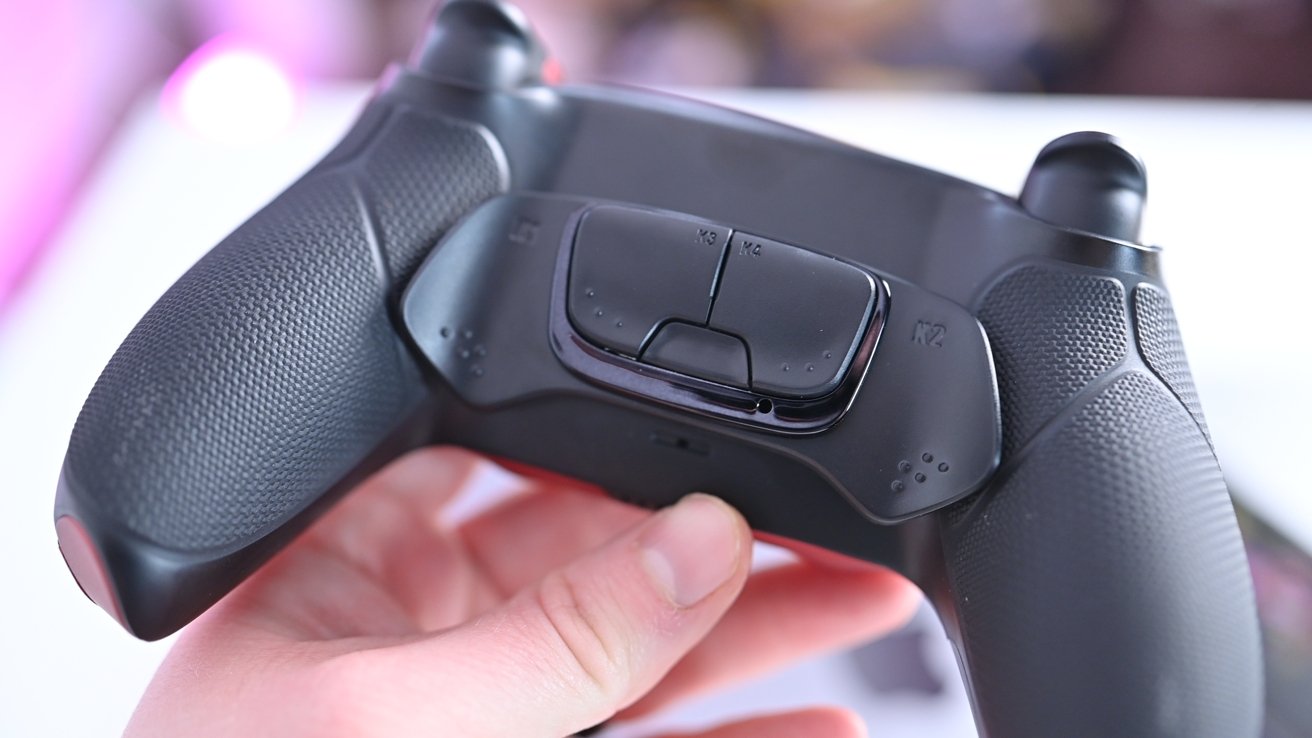 A total of 15 buttons can be mapped (X, O, Triangle, Square, Up, Down, Left, Right, L1, L2, R1, R2, L3, R3, Touchpad ) to these rear buttons. To program the buttons, you hold the customization button until the LED lights up, then you press each button and hold the button you'd like to map to it.

Once it flashes, the button is saved. Repeat for all four and the LED will turn off. 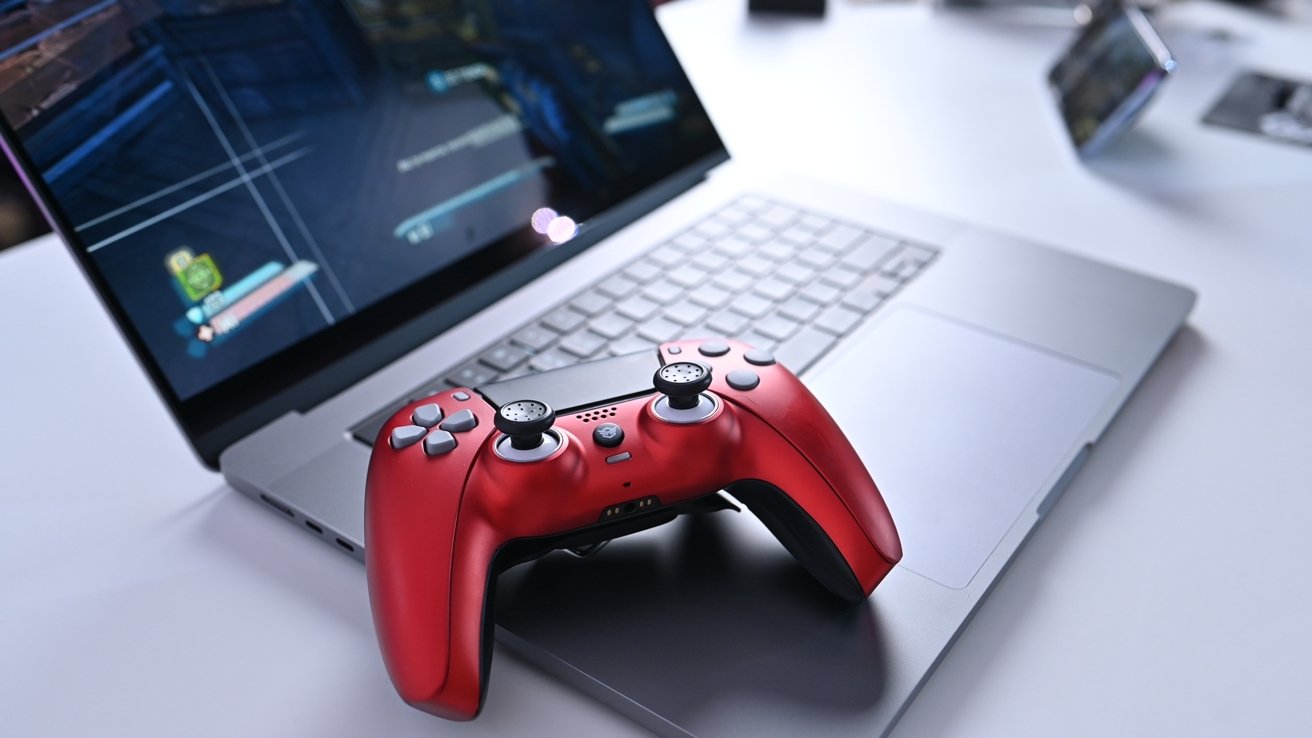 For many players, remapping buttons can greatly increase your abilities. For example, instead of removing your right thumb from the right joystick to press the triangle button, you can press the back button instead. They're effortless to press and have a satisfying click.

This feature can be accessed at any time -- including while in a game -- and is saved to the controller itself, not on any specific system or console.

The only downside is that we found ourselves reprogramming the buttons fairly frequently. It may make more sense to map L3 and R3 to two of the buttons in one game, while in another game, it may not.

It only takes a few moments, but we wish there were a way to jump between gaming profiles that way we could cycle through based on the game. 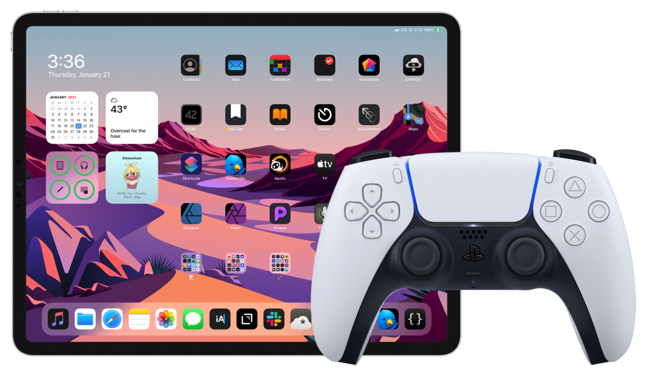 Use the PS5 DualSense controller with iPad

With these four rear buttons, there is a lot you can do here and we found ourselves relying on them and growing to love them the longer we used them. Rear button attachments have existed for console and PC controllers for a while, but these native ones are great.

Your joysticks, your preference

In the box with your HexGaming Ultimate Controller, you'll find two joysticks already attached, as well as a small plastic box with four additional joysticks. Included are two different grip designs and three different heights. There are two short domed joysticks, two short concave versions, and textured joysticks, and then one domed and one concave of the tall joysticks. 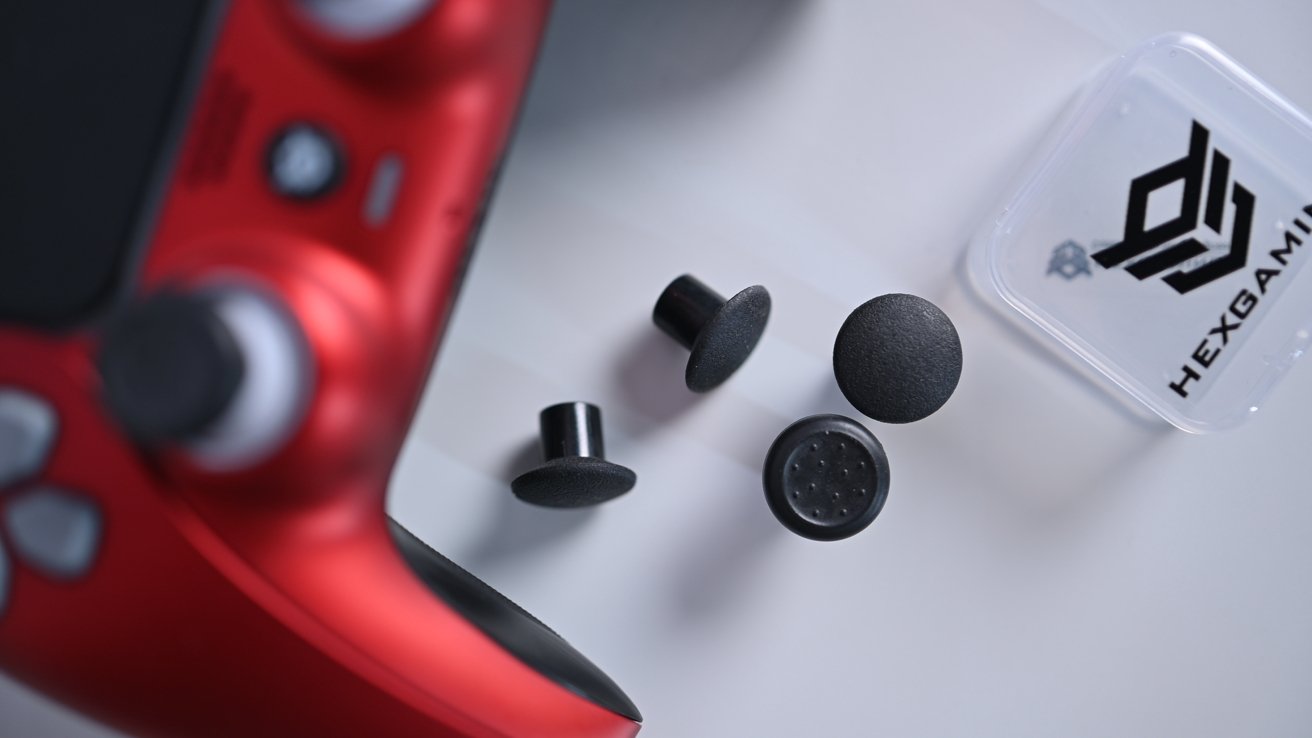 Each controller has swappable joysticks and a carrying case

Each joystick can be pulled free of the controller, and another joystick snapped into place. There's a proper orientation to the joysticks, so you'll have to rotate them until they line up correctly.

With multiple joystick styles available, users can choose what works best for them. We decided to go with a short textured joystick for the left but a tall texture controller for the right. 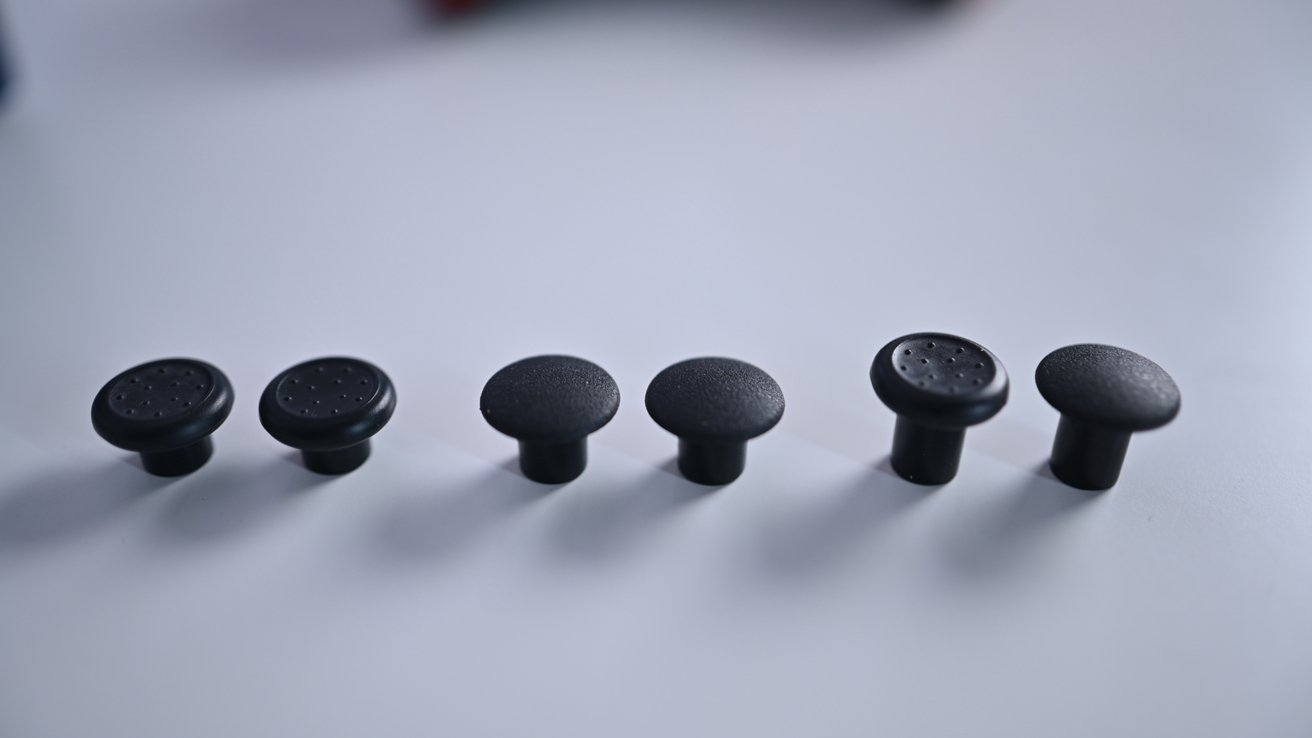 All of the various joystick options

The reason why we chose this is that the right joystick is often controlling your POV. This includes when you're driving, where your in-game camera is being aimed, or just to control where you're facing. By lengthening the joystick a bit, you have finer control.

Once we added the longer joystick, we were able to increase the sensitivity on it so we could move or aim much quicker, with much greater accuracy. It may seem like a small change, but its effects are real. 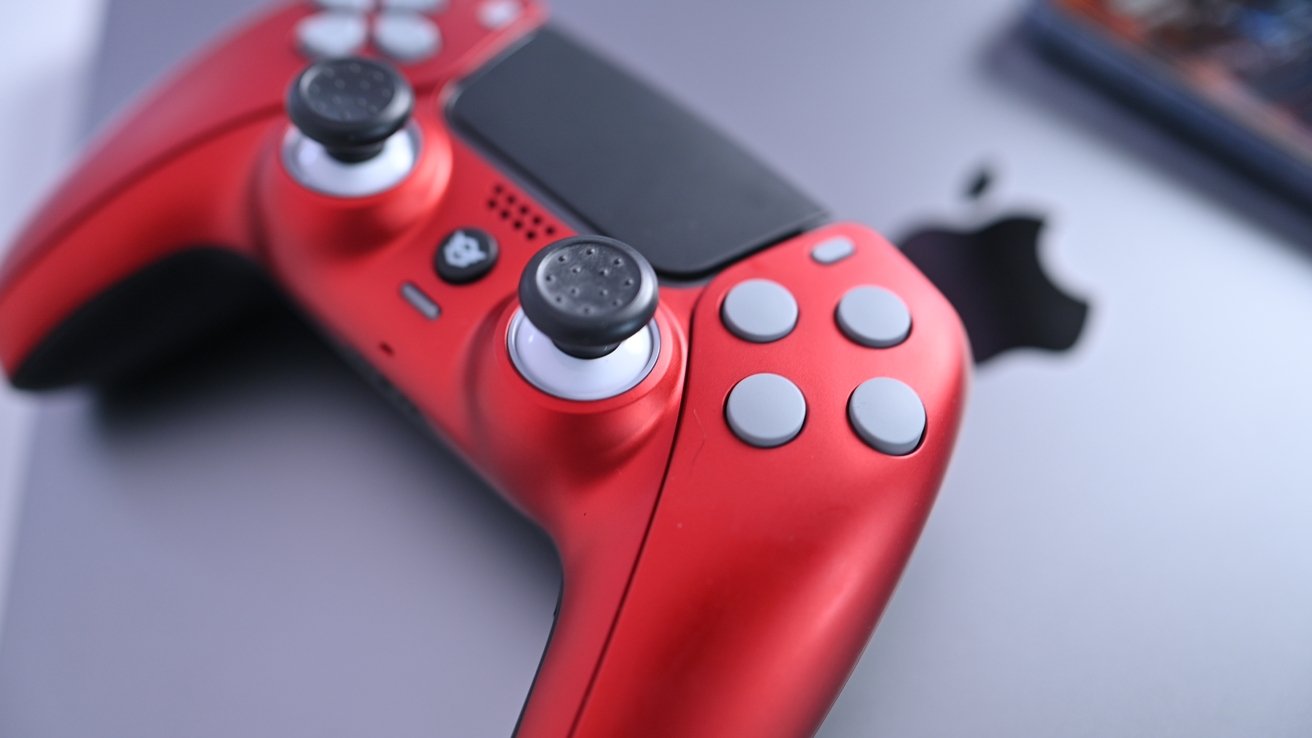 Testing out our new controller

The texture also stopped our thumbs from sliding off the sides of the joysticks. If you've endlessly run through an open-world game's landscape and just held the joystick forward, pinned against the back edge, you may have encountered this yourself.

Since the joysticks are so easy to swap, this can be done at almost any time. Plus, the little clear plastic box does help you keep track of them when not in use.

Should you buy the Hex gaming controller?

This controller isn't for everyone. If you want a reliable gaming controller, there are plenty of MFi controllers or even the stock PS5 DualSense controller to use instead.

But for the niche market of users that want a customizable, pro-level controller, the HexGaming Ultimate Controller has your back. 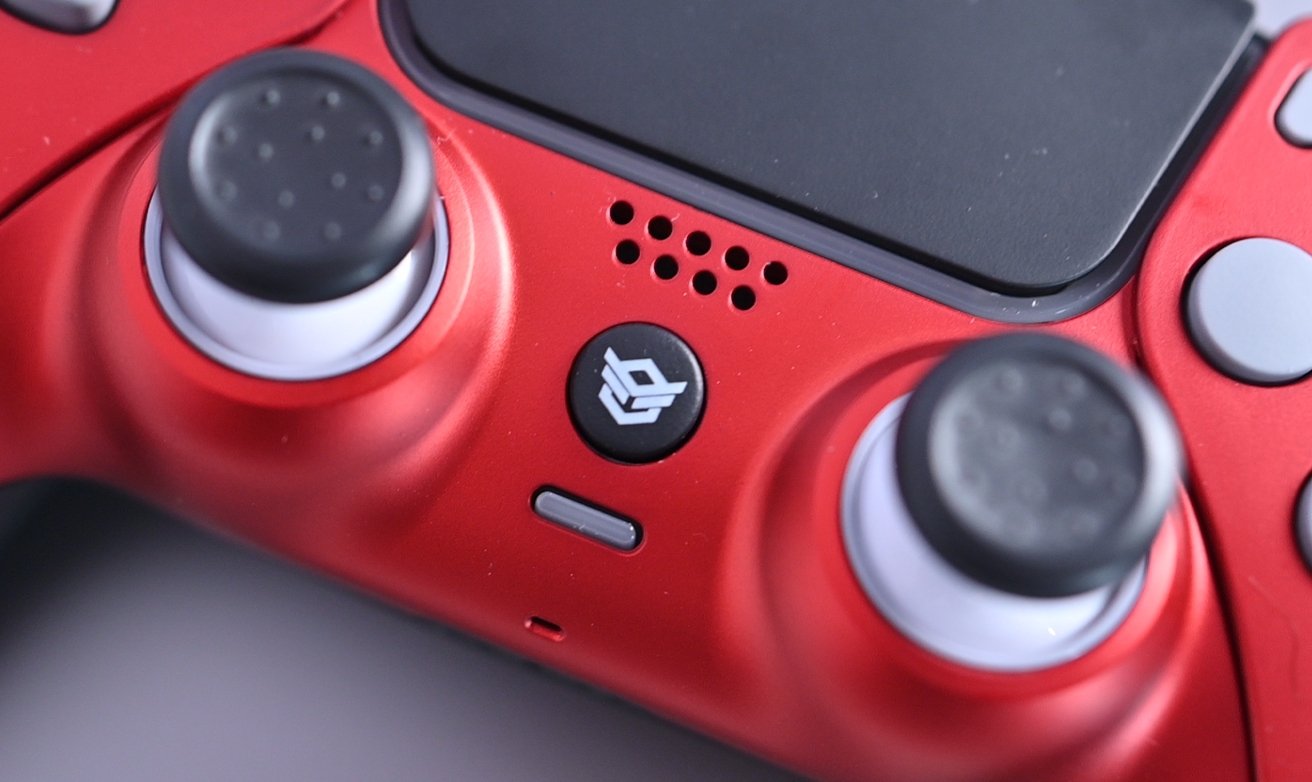 We love the look of our customized controller that has a vibrant red tone with grey accents and added grip to the bottom. We set up the rear paddles for our most often-played games to help up our scores, and it helped.

It won't take you from garbage to a pro player, but it can hone your skills even give you that edge you need. 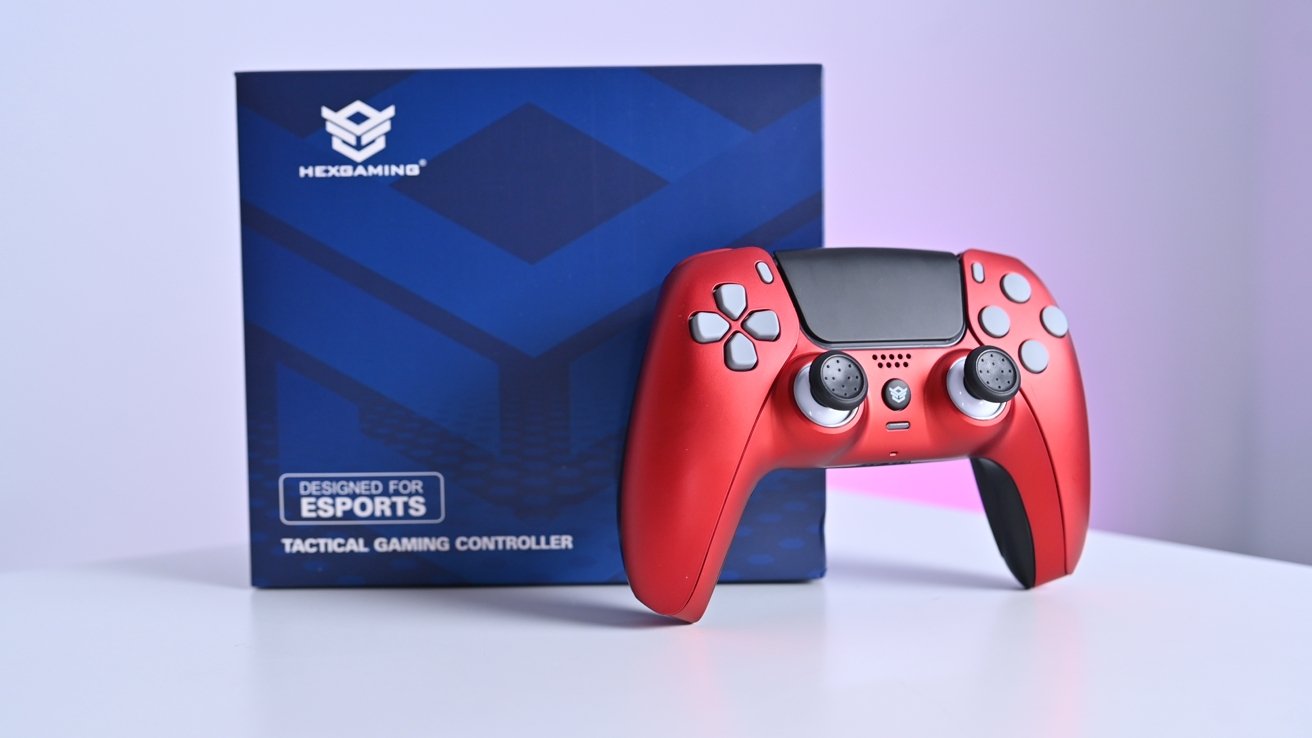 You can, of course, use this controller with your PlayStation 5, but thanks to Apple's MFi program and Sony's participation, it makes an outstanding controller for your iPhone, iPad, Apple TV, and Mac as well.

You can find the base model HexGaming Ultimate Controller on Amazon for $199 as well as multiple pre-designed ones. If you want to design your own, you'll have to visit the HexGaming website instead.

The price starts at $199 and gets you a DualSense controller with customizable joysticks and programmable rear buttons.