AppleInsider
Posted: March 11, 2022 4:58PM
in General Discussion edited March 30
Apple's new Mac Studio is the company's most powerful Apple Silicon machine yet. Here's how it stacks up against the Mac Pro, Apple's most powerful Intel-based Mac to date. 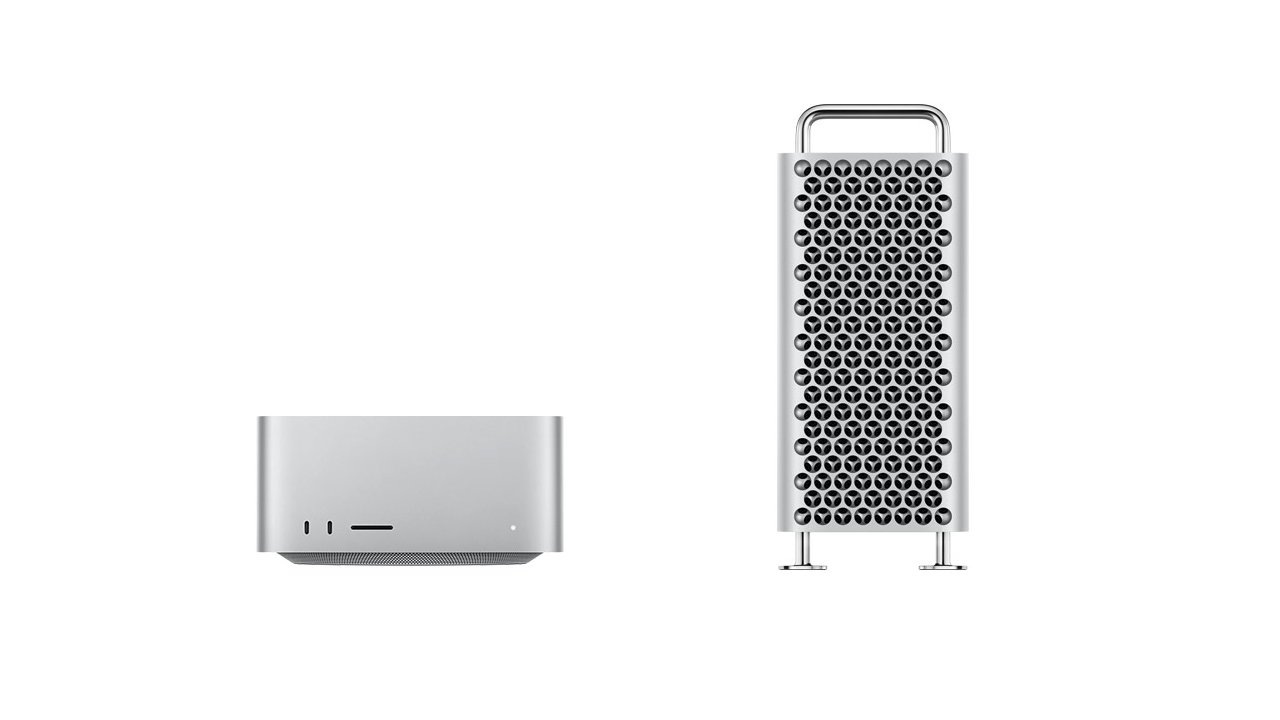 The Mac Studio fills a new slot in Apple's Mac lineup between the Mac mini and the Mac Pro. While it's technically in between those devices in the lineup, it actually outperforms the Mac Pro across a variety of metrics.

To see how the Mac Studio can deliver more power for less money, here's a comparison of the two machines as far as CPU, graphics capabilities, and other considerations. 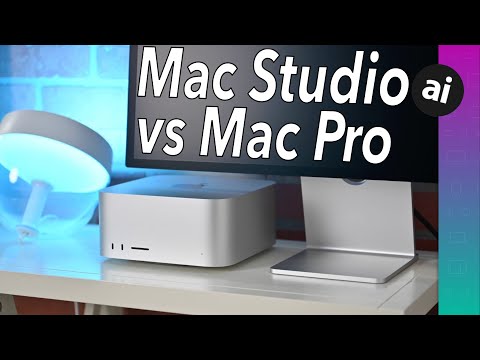 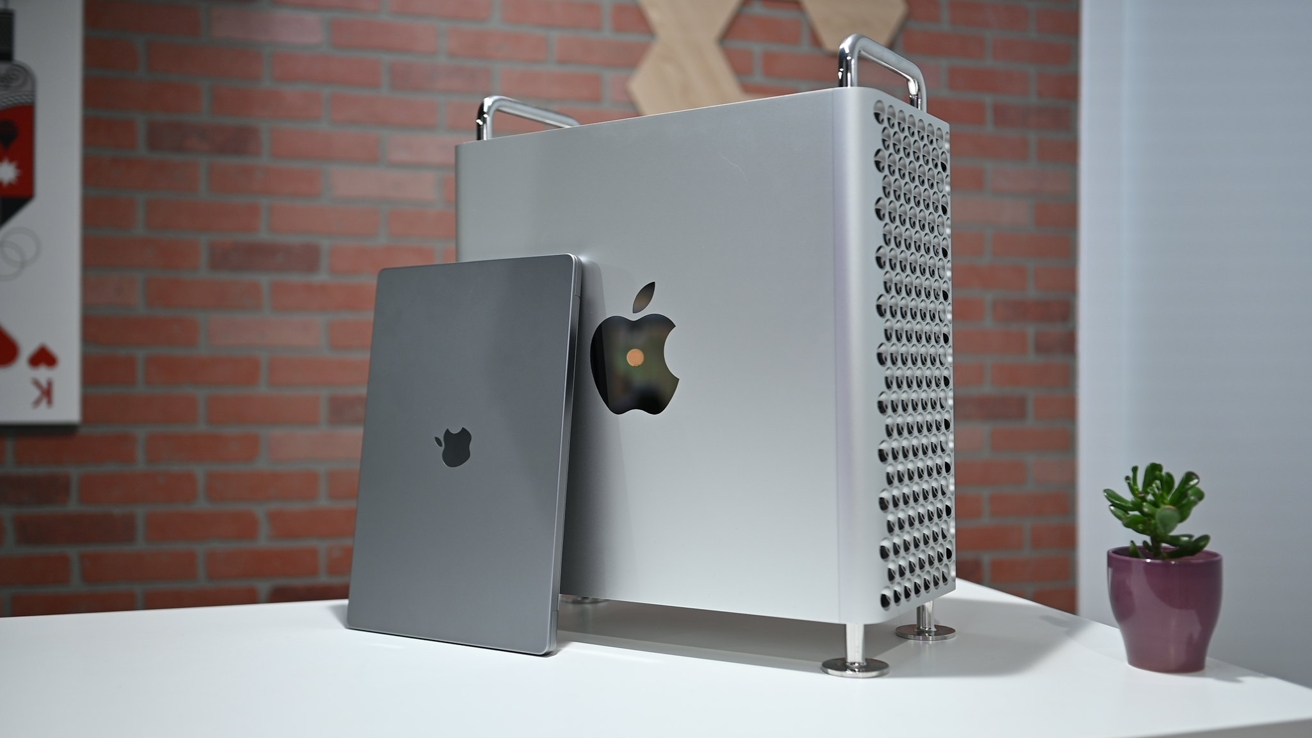 The Mac Pro is a modular machine, while Apple's M-series Macs are not.

The Mac Studio is available in multiple configurations, just like the Mac Pro. 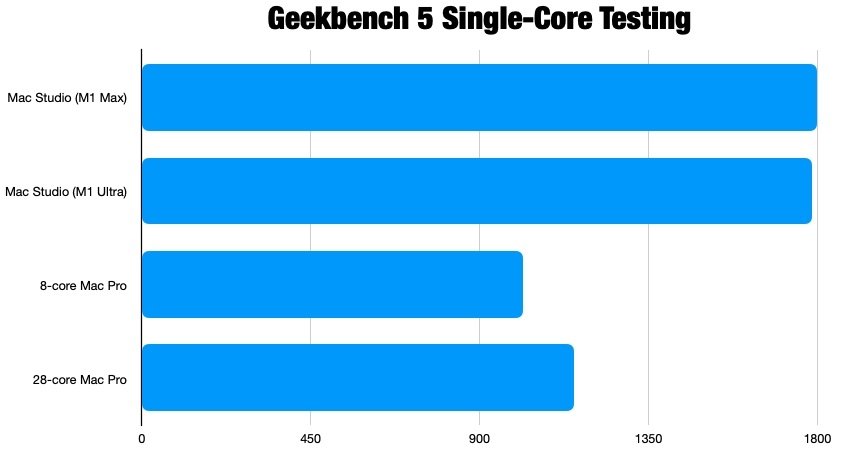 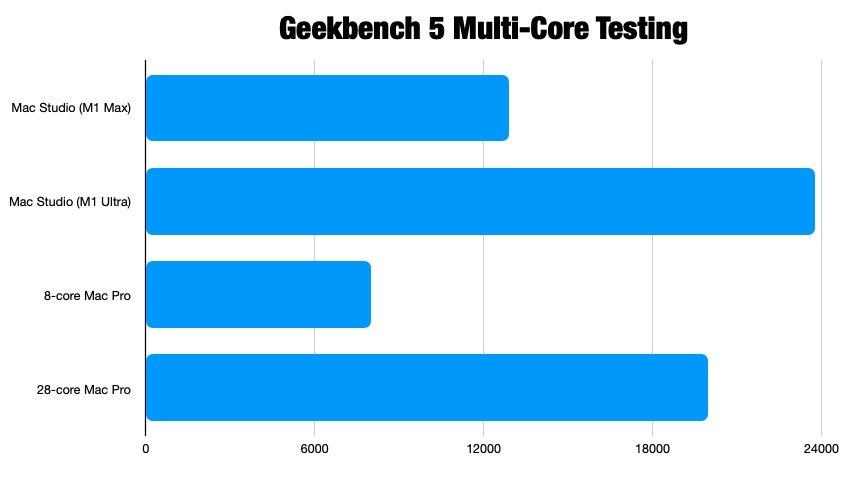 In other words, the top Mac Studio model available far outperforms the top Mac Pro in single-core and multi-core testing -- and for a lot less money and power consumption. 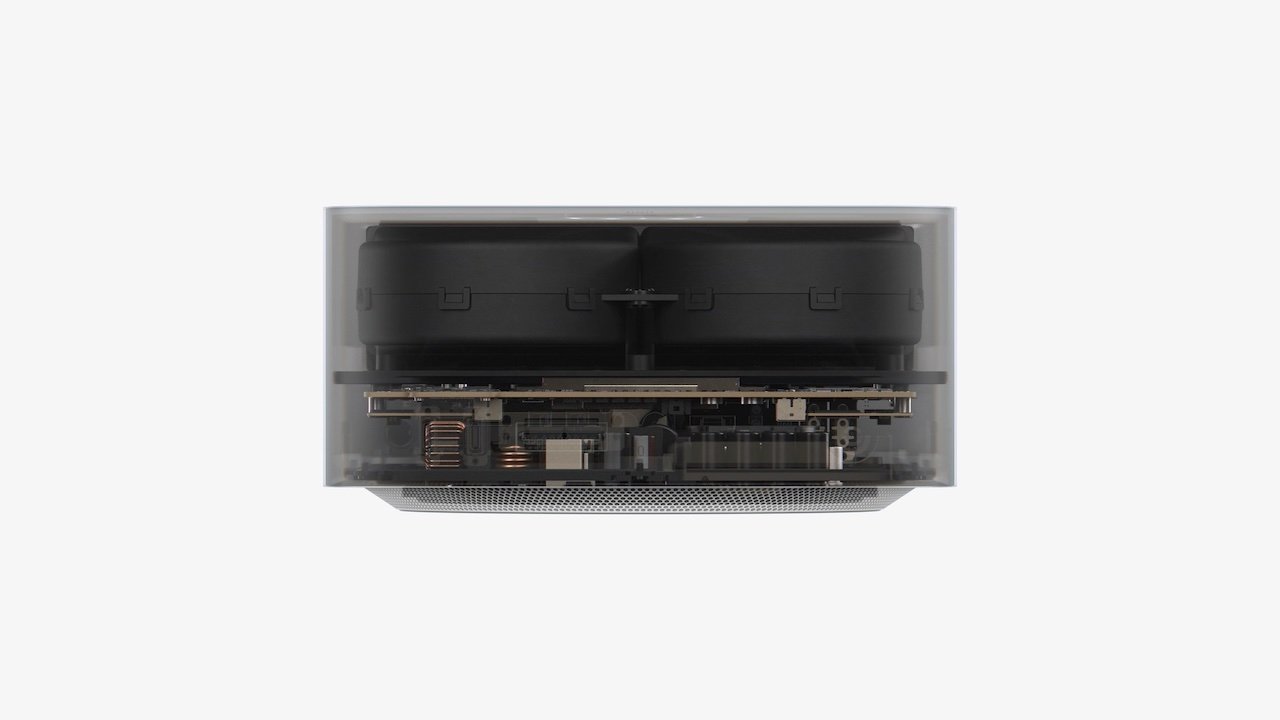 Apple's M-series chips are equipped with what the company calls Unified Memory, which is embedded on the chip. Apple says the Unified Memory technology allows for various elements on a chip to access stored without needing that information to be stored in specific memory pools.

Apple's Mac Pro start with 32GB of DDR4 ECC memory. The base model runs at 2,666MHz, while all other options on the Mac Pro use 2,933MHz RAM modules.

The Mac Pro can be configured with a lot more memory, if need be. Users can add up to 1.5TB of DDR4 ECC memory to the Mac Pro, though that upgrade will cost $25,000. 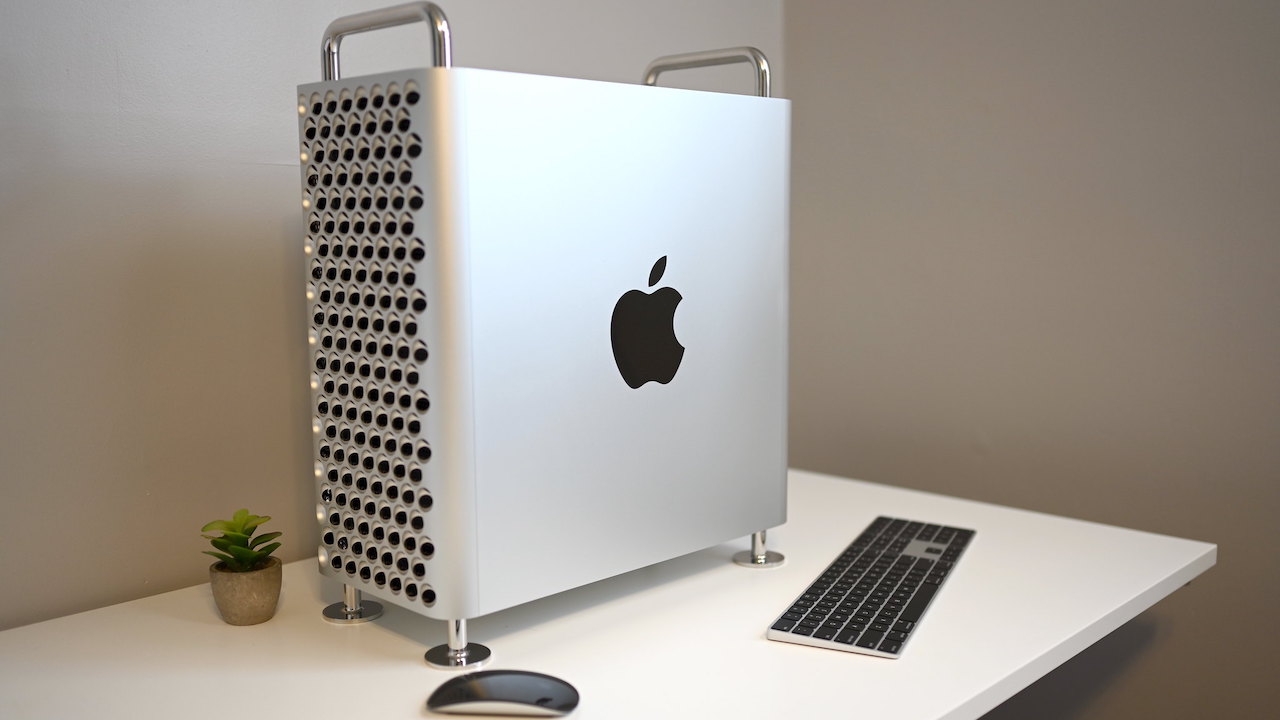 The Mac Pro has a range of GPU options available.

Recent Geekbench 5 Metal graphics benchmarks for the M1 Studio indicate that the M1 Max achieved a GPU score of 60629.

The same test on an Mac Studio with an M1 Ultra chip resulted in a graphics score of 91938. 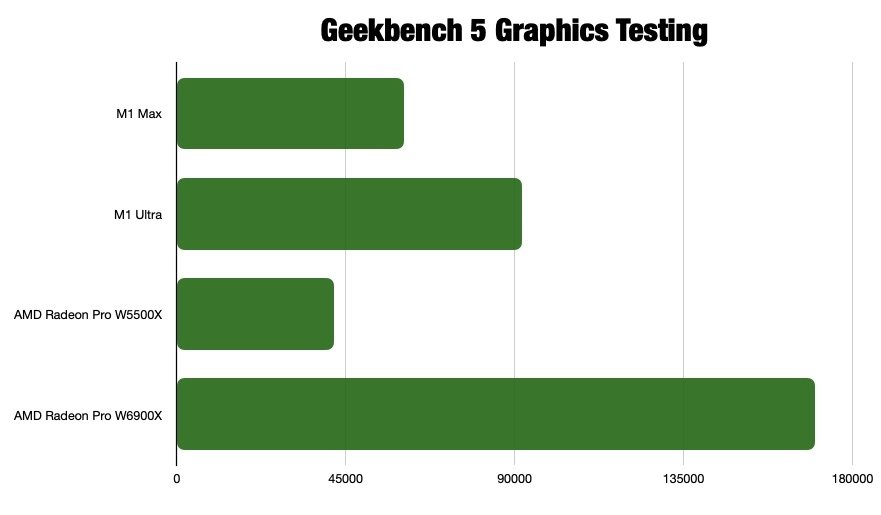 Comparably, the lowest-tier Mac Pro now comes with an AMD Radeon Pro W5500X, which scored a 41874 in the same test. 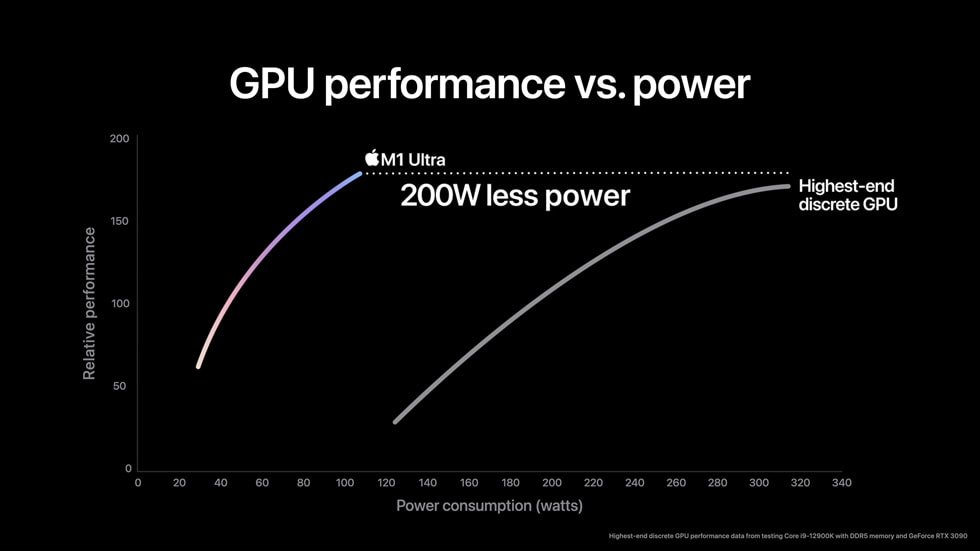 In Apple's own testing, the chip achieved better graphics performance than the "highest-end discrete GPU" while using a lot less power. AppleInsider testing found that the M1 Ultra had excellent graphical performance, but it still didn't keep up with the AMD Radeon Pro W6900X.

Additionally, we tested the 24-core GPU on the M1 Max and the 48-core GPU M1 Ultra, but Apple allows users to configure both chips up to 32-core and 64-core, respectively. If you're willing to shell out a bit more money, then you can get more graphical performance than what's listed here. 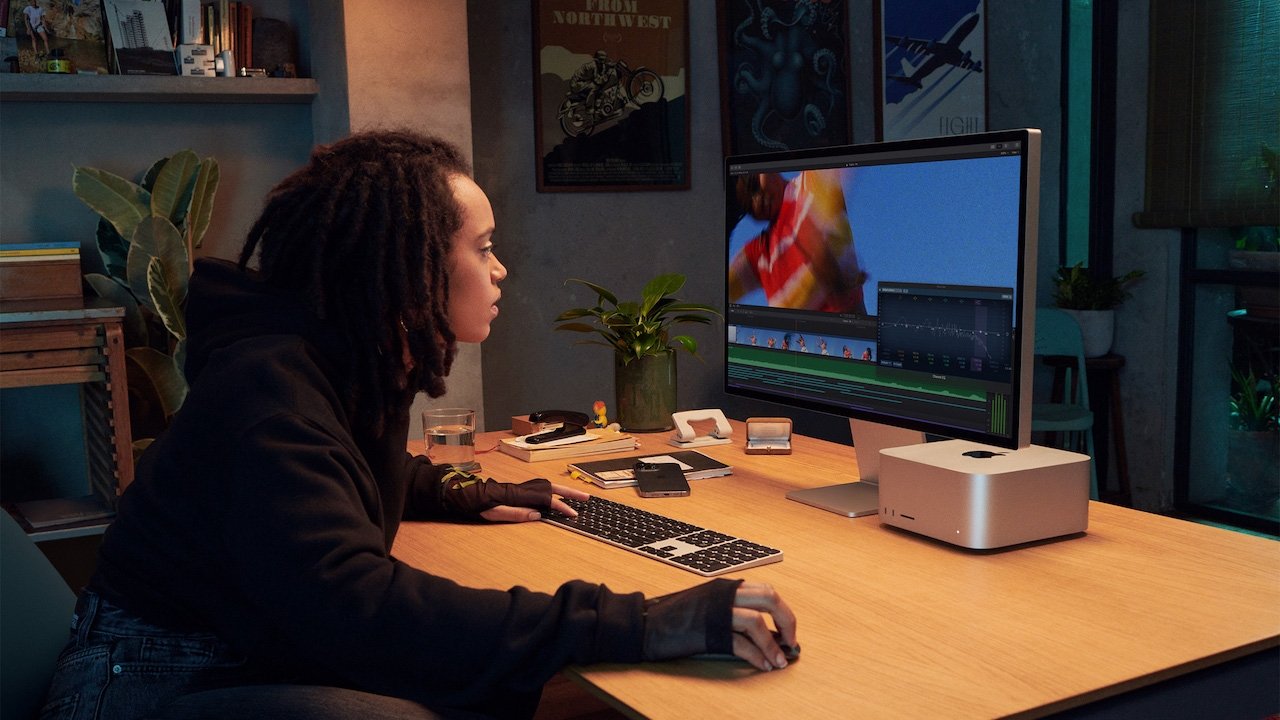 The Mac Studio's Media Engine outperforms the Afterburner card by a long shot.

The Mac Pro can be configured with an Afterburner card for $2,000, which Apple promises will speed up workflows involving video. The Afterburner card is a PCI-E based accelerator that can handle video codecs like ProRes and ProRes RAW.

Apple's M-series chips come with an equivalent called the Media Engine, which is an on-silicon element that boosts performance for video and media work.

Mac Studio vs Mac Pro - Upgrades and other main features 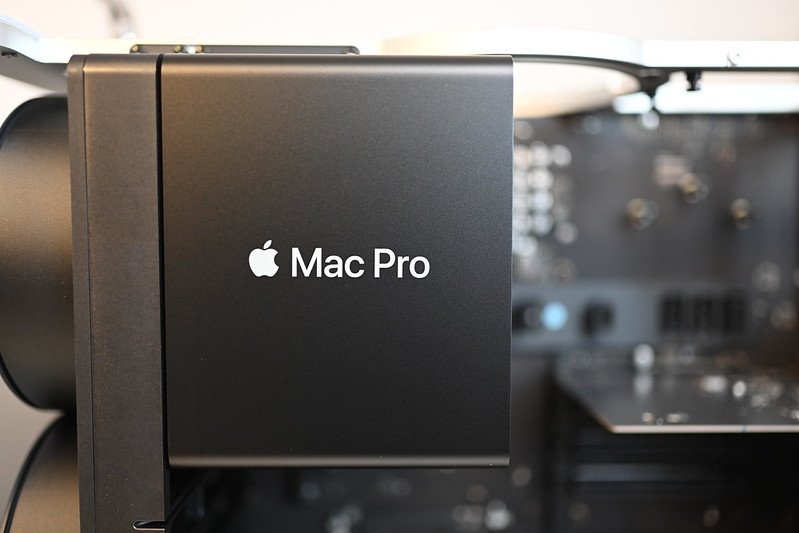 The Mac Pro is highly modular and configurable.

When it comes to onboard storage, both the Mac Studio and the Mac Pro offer the same range of SSD options: 512GB, 1TB, 2TB, 4TB, and 8TB.

Speaking of user-upgradeable, the Mac Pro's main draw is the fact that it can be configured with additional PCI Express or MPX Module cards. The Mac Studio, like other M-series Macs, doesn't support this level of modularity.

The Mac Studio is also a lot smaller than the Mac Pro, with a form factor akin to a beefed-up Mac mini. That could be a boon for users with smaller spaces to work with.

The Mac Pro can be configured with up to 12 Thunderbolt 3 or USB-C ports, depending on the specific configuration. It also comes with a pair of USB3 ports and dual 10Gb Ethernet ports. PCI Express expansion cards can add additional I/O to the machine.

In the box, the Mac Pro comes with a keyboard and mouse. The Mac Studio, however, does not. 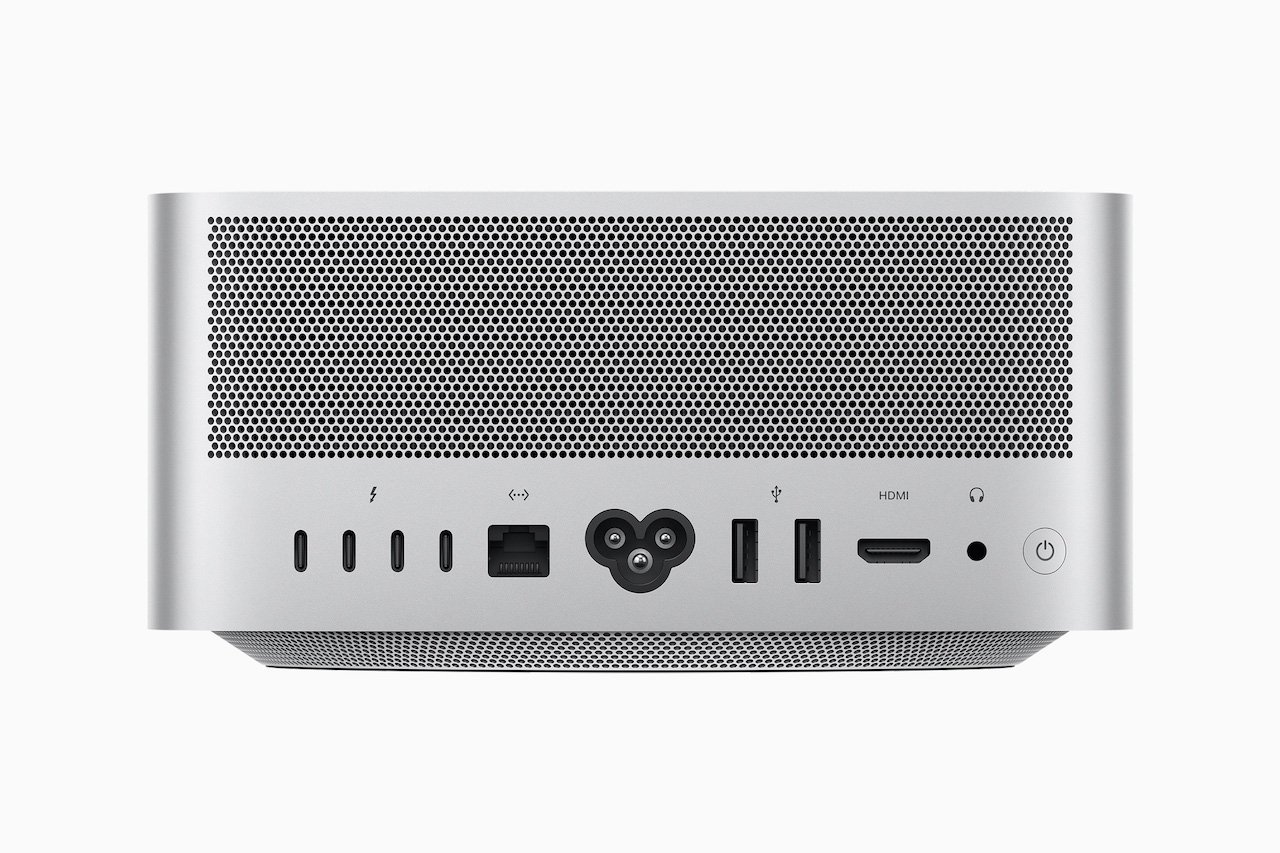 The Mac Studio delivers a lot of bang for the buck, including a robust I/O.

There's a stark difference in pricing between the two Mac models. The Mac Studio starts at $1,999, while the Mac Pro starts at $5,999.

M1 Mac Studio outperforms the Mac Pro in most cases

The Mac Studio delivers a lot more performance than even the top-tier Mac Pro -- and all for a lot less money.

Because of that, it's hard to recommend the Mac Pro except in very specific use cases. If you absolutely need an Intel-based machine or you can't do without a Mac that has some level of configuration, then the Mac Pro will be your best choice.

For most professional users, the Mac Studio has enough power to handle virtually any performance or graphics need. In fact, it outclasses the Mac Pro in multiple tasks.

Of course, the Mac Pro is also technically an aging device -- and a refresh equipped with an Apple Silicon chip is just over the horizon.