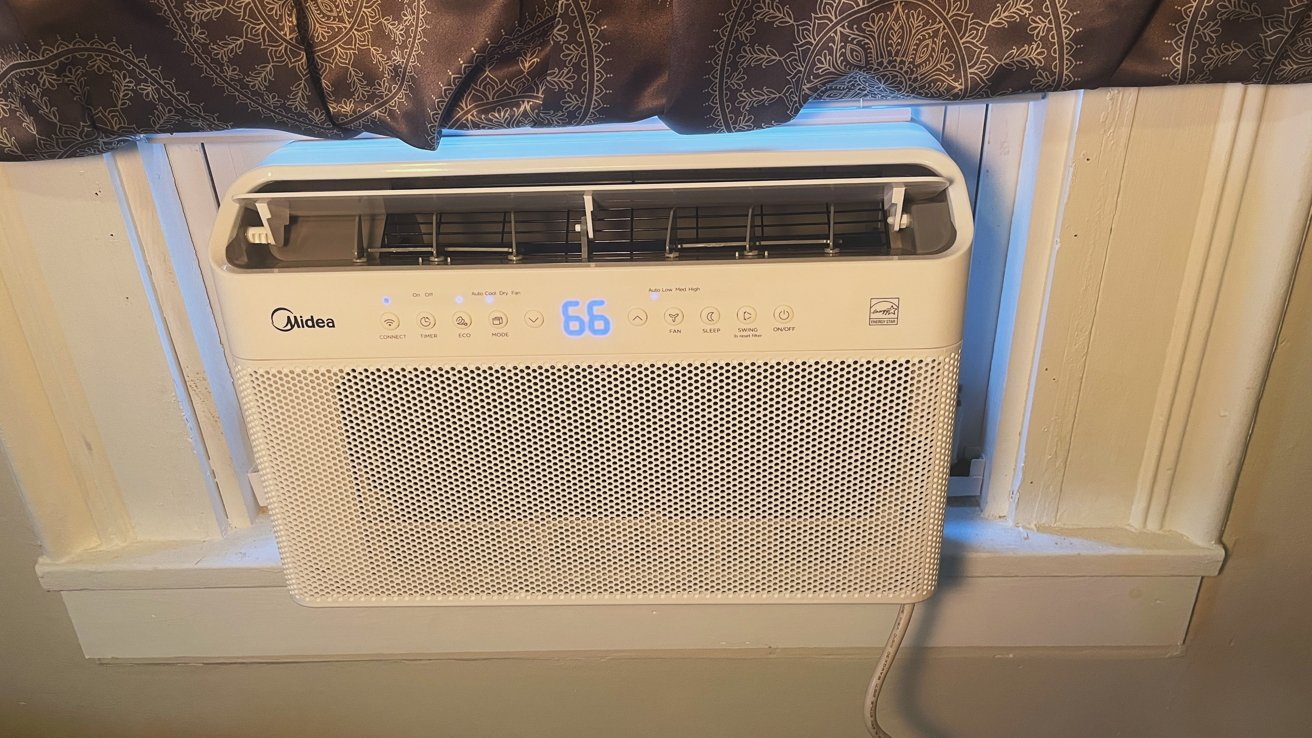 In early July, I purchased my first home, which I've been dreaming about for my entire life. But, of course, I didn't have a crazy-high budget, so I knew I'd have to purchase an older home that needed some work.

The house I eventually bought was built in 1882, making it 140 years old as of this year. It's had some work done on it recently, but for the most part, it's still a fixer-upper.

As it is an older home, it didn't come equipped with central air. With the heat routinely leaping into the 90s, I knew I wouldn't last long without a window AC.

However, I didn't want to settle for just any air conditioner. I wanted something that wouldn't run up my electric bill and would work well for my space.

I did my research and landed on Midea's line of U-shaped Smart Air Conditioners. Not only are they ultra energy efficient, but they've developed a cult following.

So, I bit the bullet, charged my credit card, and brought one home.

Midea's U-shaped Air Conditioners feature a unique design that allows the window to sit "inside" of the air conditioning unit. This has several advantages over the traditional style, where the window merely rests on top.

First, it means that your unit is incredibly stable. With the air conditioner locked in place by the pane of glass, it feels more secure. 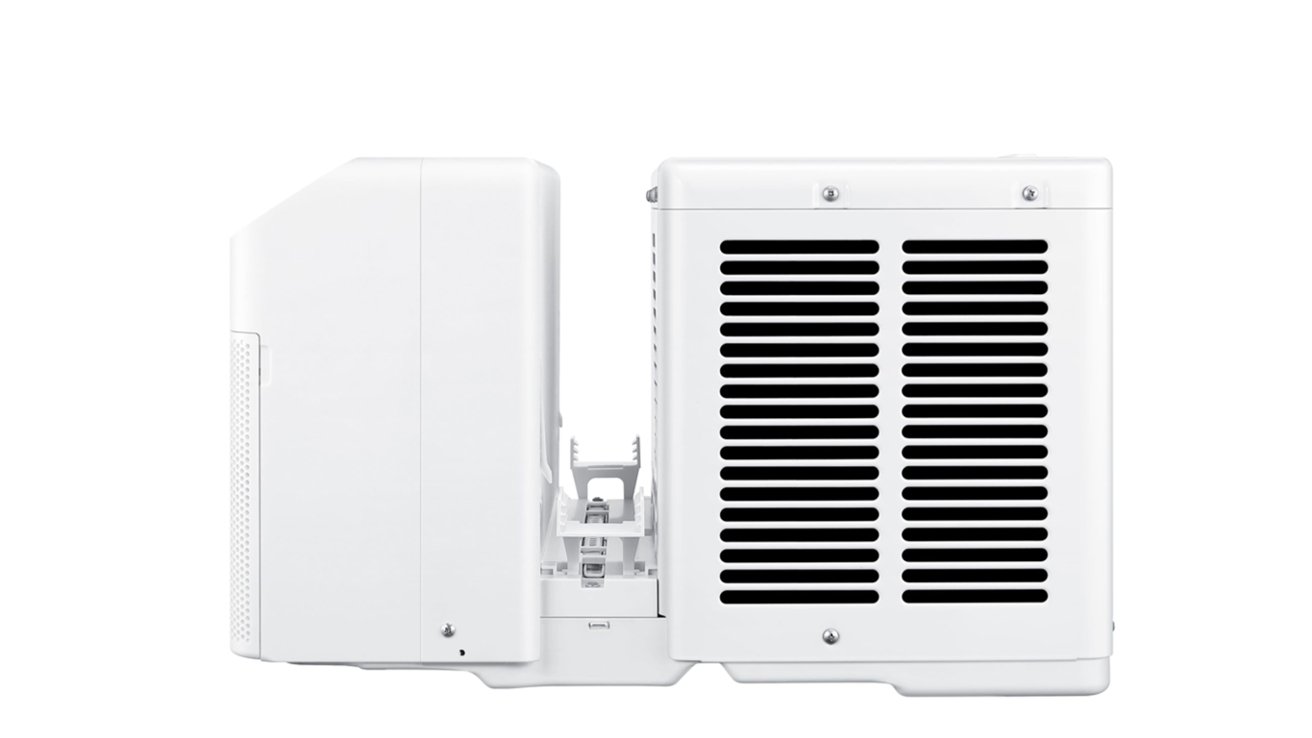 The Midea U, viewed from the side | Image Credit: Midea

I haven't had any issues making phone calls or FaceTime calls in the same room as the air conditioner. I appreciated this, as turning off the AC to make an hour-long phone call when it's 90 degrees outside is hardly ideal.

Lastly, it's sealed off better. With traditional window units, you'll wind up fussing with one of those plastic accordions and trying to seal off any cracks with fussy pieces of weather seal.

With Midea's U-shaped Air Conditioner, you'll only be left with a small gap on either side at the bottom, which you can easily seal off with a thick piece of foam that Midea includes.

The entire design seems like the logical evolution of where window units should have ended up already.

While it's a bit of a hard sell to claim that any electrical device can genuinely be "eco-friendly," the Midea U is currently the best option for electric usage.

When figuring out how energy efficient an air conditioner is, the US government uses a system called CEER, which stands for Combined Energy Efficiency Ratio. 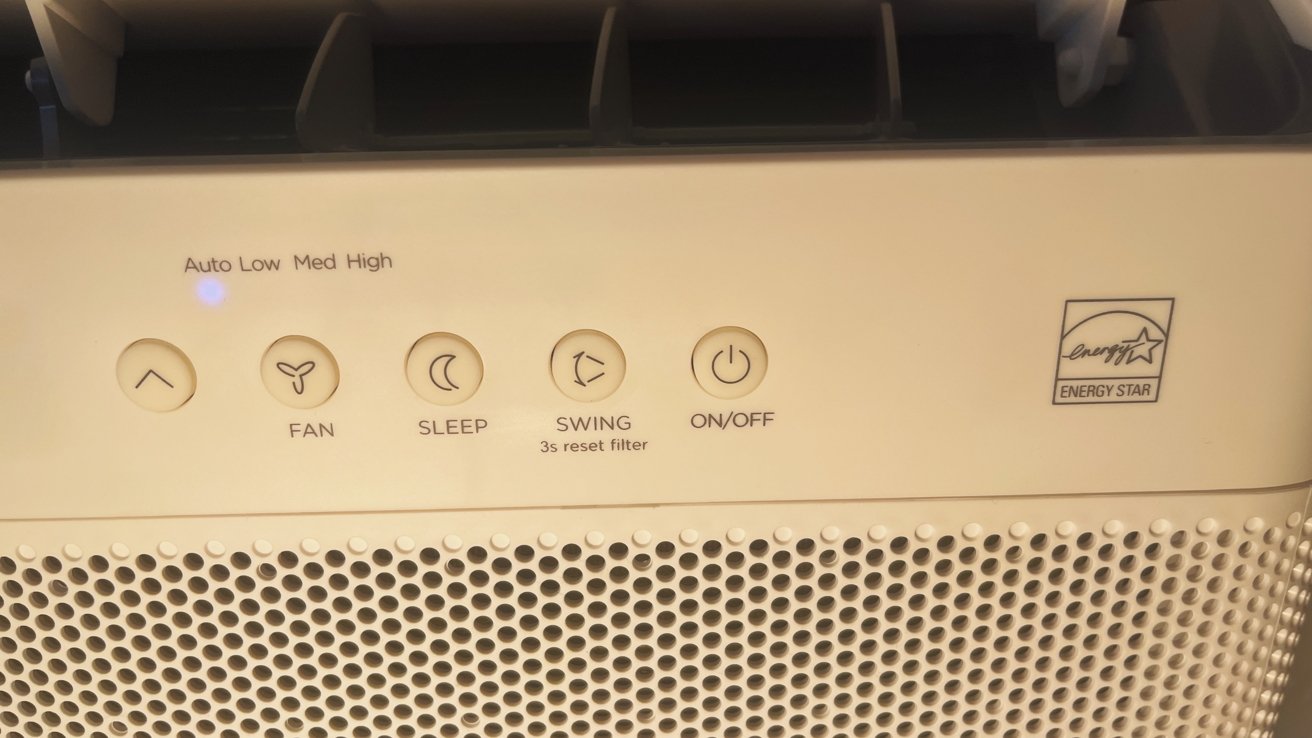 The auto mode can slow fan speeds, saving energy and prevent overcooling of your space

CEER is defined as "The ratio of measured cooling output (in BTU per hour) to measured average electrical energy input (in Watts) and measured standby/off-mode power consumption (in Watts)."

The estimated yearly cost of the Midea U is under $50, assuming that you're using it for 8 hours a day for three months, with the average electricity cost of 13 cents per kWh. But, of course, your mileage may vary.

While the design is fantastic, you must work to enjoy it. Installing this type of air conditioner is not as easy as Midea would have you believe.

I've installed window unit air conditioners myself in the past. Sure, it wasn't fun, but it's pretty straightforward.

Installing the Midea U was not like that -- at all. Not only did it require me to read the manual from front to back, but it also required me to call in additional help from my father. 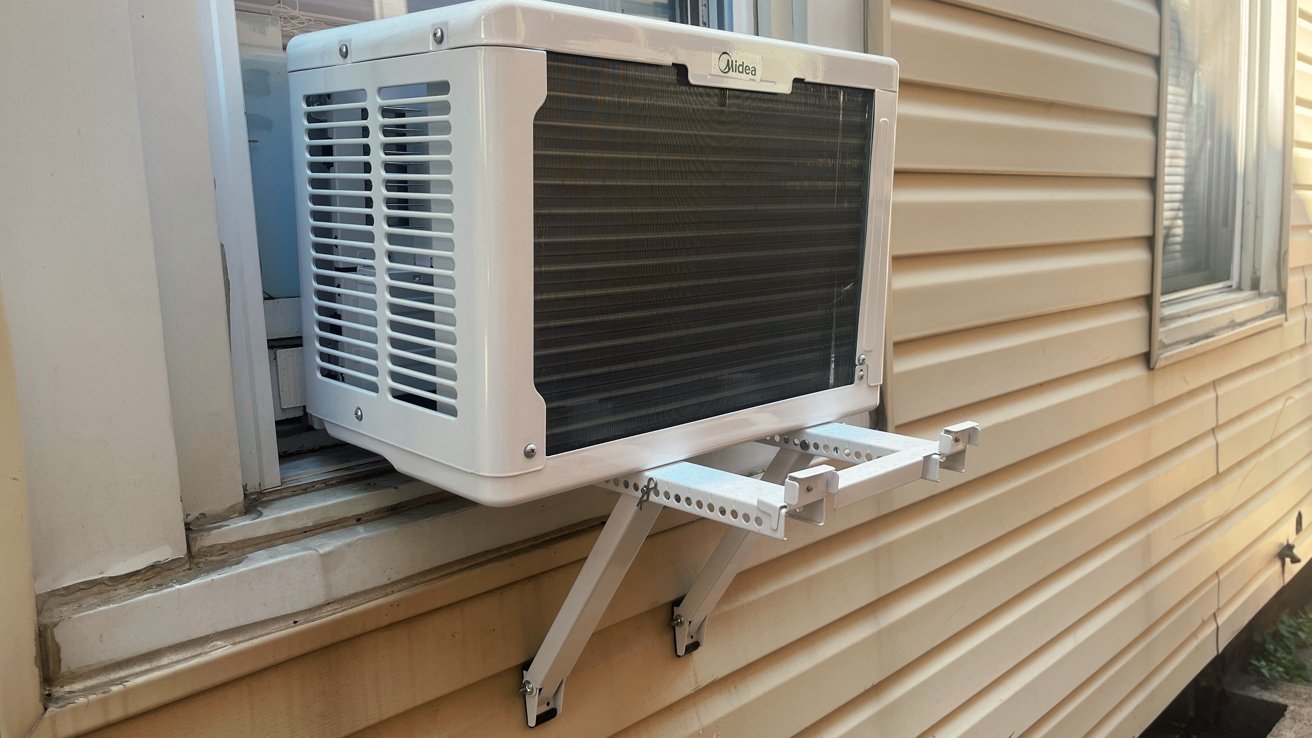 The Midea U must sit on a bracket, unlike many other window units on the market

Unlike any air conditioner we've installed before, the Midea U has a non-optional bracket that you'll need to use. This was a new experience, as it required us to assemble the bracket, attach it to the window, and place the unit on it.

We also had to do some fiddly work in the spot where the window slots into it. It's a 10+ step process, and even if you watch the included installation video, it may not be abundantly clear how to do certain steps.

Just keep returning to the manual because it will be instrumental in getting you through the installation.

Overall, it took us a full hour and a half from unboxing to switching it on for the first time -- about an hour longer than it took us to install the traditional window unit upstairs.

I advise that if you install one yourself, make sure you have at least two people, if possible. Not only did this make it easier to quickly check the manual, but the unit itself is also quite heavy -- just over 55 pounds -- and cumbersome to move around.

I have been using the Midea's U for nearly two weeks now, and I've been incredibly impressed with how well it's managed to keep pace during a hot stretch.

I opted to go with the 8,000 BTU unit, despite the warnings that it would be much too small to cool my downstairs.

However, I find that it manages to keep the entire downstairs of my two-story, 2000-square foot home comfortably at 73 degrees and doesn't need to run 24/7 to do so.

There's an app for that

As a bonus, the Midea app is pretty decent. It's not perfect, and it has a strange issue where it logs me out every 12 hours, but unlike many other smart device apps, it's actually intuitive. 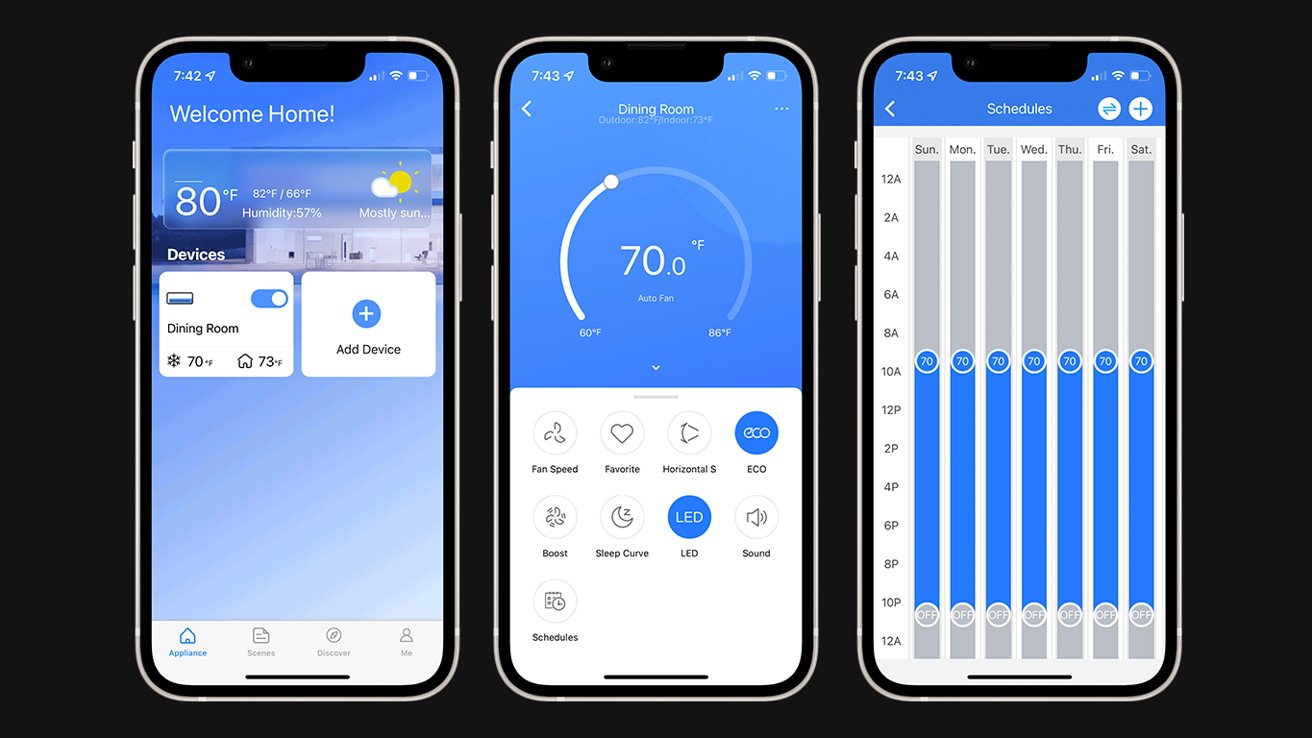 You can change the settings on your air conditioner directly from the app, including fan speed, temperature settings, which mode you're in, the direction of the vent, and more.

You can also set up schedules, which can be very beneficial.

I didn't want to cool the spaces of my house that I wasn't actively using, as that would be a waste of electricity. At night, the AC turns off two hours before I go to bed, turning back on in the morning just as I wake up.

Something I did not bank on was just how far the safety bracket of the air conditioner sticks out -- a full 18.5 inches from the window. While this may not be a problem for some people, it presents a huge problem for others.

I live in a neighborhood where the houses are positioned pretty close together, and I share an alleyway with my neighbors where we store our garbage and access our outdoor spigots. 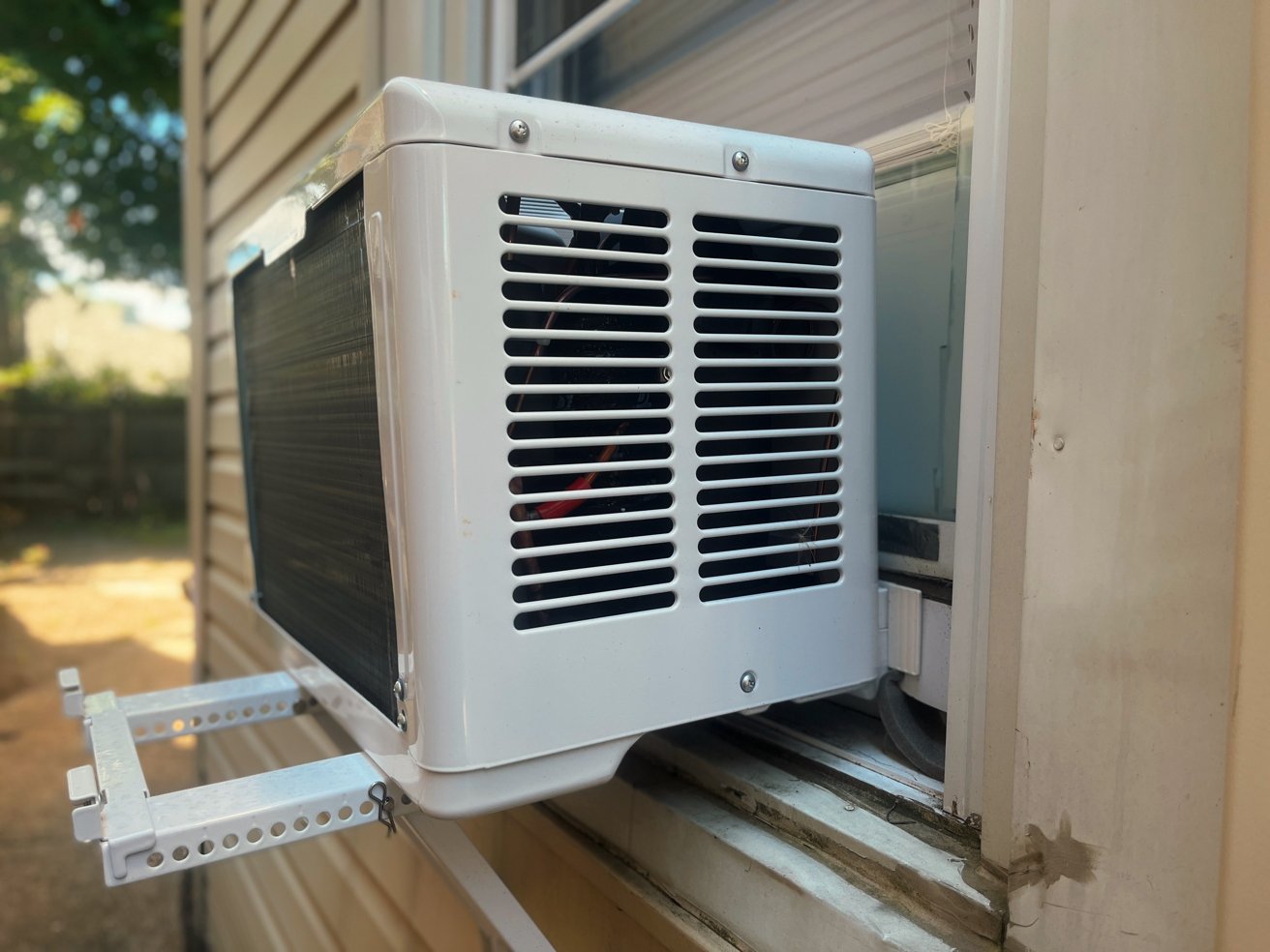 The bracket sits a full 18.5 inches out from the window

If our houses were placed any closer, the air conditioner will probably obscure the path too much and would need to be moved to another window.

These air conditioners may not be advisable for those living in apartment buildings with fire escapes. After all, it's not worth it to obstruct your safety and the safety of others, no matter how well the air conditioner works.

The Midea U is one of the best window unit air conditioners I've had the pleasure of using. It's quiet, has fantastic app integration, and hasn't resulted in a multi-hundred-dollar electric bill.

If central air isn't an option for you -- or if you don't particularly like central air in the first place -- it would be hard to do better than a Midea U.

It can be hard to determine one rating that would work for every user in every use case. Truthfully, it falls somewhere between a 3 and a 4 and depends on several factors.