AppleInsider
Posted: March 2, 2016 10:51AM
in General Discussion edited March 2016
Speaking to shareholders at the company's Annual Meeting on Friday, Apple's chief executive Tim Cook joked that he kept himself up to date on the progress of his Campus 2 "Spaceship" project by watching drone videos posted on the Internet. For Cook and everyone else that's interested, here's the latest progress update on Apple's new innovation center.

Back in January, a drone video showed massive glass panels being installed, the largest on earth. In October, the entire ring was just beginning to take shape.

Today, most of the glass has been installed and the entire Spaceship ring structure has topped out, and the roof top's HVAC (Heating, Ventilation, and Air Conditioning) equipment is being covered with plates (appearing blue in the video) that will hold vast solar photovoltaic panel structures that will likely make the project the largest corporate solar structure in the U.S. 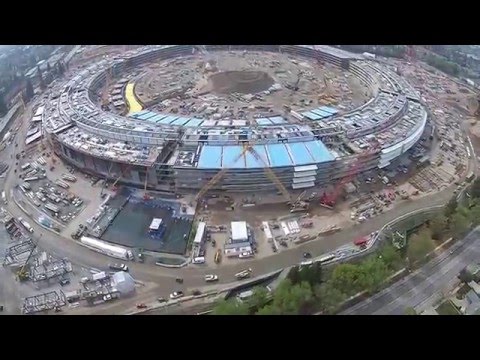 The distinctive Campus 2 project is so large it can be easily spotted from aircraft, as shown in our March update video (above). Also clearly visible is the project's grand cafeteria area with a dramatically high ceiling, the first segment of the structure to begin rising back in March of 2015, just one year ago.

Also depicted are the white fin-like sun shields that will ring the building at each floor level. The structures also function as part of the building's fresh air ventilation system, which will enable it to run without heating or air conditioning throughout most of the year, taking advantage of the very comfortably mild weather that blesses Cupertino, California.

Cook also noted to shareholders on Friday that project's 1000 seat theater might open in time to host next year's Annual Meeting, if everything goes according to plans.

See previous coverage on AppleInsider of Apple Campus 2 and the current Infinite Loop headquarters, or our other articles on drones. Viewers interested in the DJI Phantom 2 Vision+ drone can read more about the device here.