AppleInsider
Posted: March 24, 2016 10:45PM
in iPad edited March 2016
It's not surprising that Apple has incorporated the new features first introduced last fall for its 12.9 inch iPad Pro to its new 9.7 inch iPad Pro--essentially making it an enhanced iPad Air 2 packing an A9X brain, quad speakers and support for the new Apple Pencil and Smart Connector. What is surprising is that in just six months, Apple has enhanced the iPad Pro with an iPhone 6s-class camera with True Tone flash, and has invented a new "True Tone Display" for adapting the screen to ambient lighting--a substantial investment in iPad as a platform.

If you're wondering why Apple is investing so much innovation work into its "troubled" tablet platform--one which certain pundits have been describing as "collapsing" for years--it's because Apple knows that iPads are actually selling rapidly in new markets, particularly China. It also sees great potential in moving iPads into roles formerly performed by basic PCs, notably in the Enterprise. Apple's marketing specifically calls the Pad Pro "an uncompromising vision of personal computing for the modern world."

Microsoft beat Apple to the punch in describing its own tablets as "uncompromising," but customers didn't agree. Over its first three years of Surface Pro sales, Microsoft was unable to sell its hybrid laptop-tablet product in anything resembling the massive volumes iPad has maintained every year since it debuted in 2010. As Surface struggled to break even, iPads rapidly grew into a massive business on par with Apple's Mac lineup. In fiscal 2015, Apple brought in $23 billion from iPads and $25 billion from Macs. No other company is anywhere close to the revenues and profits Apple is generating from tablets.

It's no secret why iPad sales volumes have tapered off from their highs reached before the launch of larger iPhone 6 models. Initial iPad sales largely filled a demand among consumers who wanted a portable screen to relax with, and that audience is now both satiated with the iPads they already have (call it the GoPro effect), and also distracted by the crossover utility of iPhone 6 Plus (as they say of cameras, many have found that "the best tablet is the one you have with you").

While major new markets are continuing to open for iPads, Apple is increasingly positioning iPad Pro as a new category; rather than serving the space between PCs and iPhones, as Steve Jobs introduced the first model as targeting, iPad Pro takes full aim at the PC itself.

The iPad Pros' A9X is now fast enough to rival entry level PC laptops and is more powerful than much of the PC installed base. It can also do things standard PC laptops can't, and is accessible to new users in ways that Windows--or even Mac OS--often remains inscrutable. Unlike a desktop PC, anyone who can operate an iPhone already knows how to use an iPad.

Not just a fresh Air 2

That helps to explain why the company is doubling down on its pace of innovation centered on iPad Pros. After five years of rapidly improving the processing power inside the standard iPad and its smaller form factor iPad mini sibling, Apple introduced iPad Pro last fall with a display the size of a MacBook, paired with a thin collapsible keyboard that folds up into a cover.

It also introduced Apple Pencil, which rather than being a navigational stylus (or oriented around "pen" handwriting recognition) as introduced by the Newton Message Pad back in 1994, it instead serves as a precision input device for drawing, plotting, painting, diagraming and sketching. 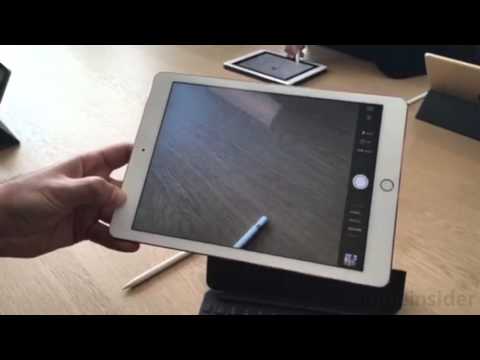 Supporting this new Pencil required new screen technology, meaning that Apple had to significantly redesign the iPad Air 2 to bring Pencil support to its mainstream 9.7 inch tablet. This feature trickle down is something Apple has repeatedly done before, such as when introducing Retina Displays first on the new iPhone 4, then on its third generation iPad, and eventually on less expensive iPad minis.

In addition to incorporating Pencil support, the new 9.7 inch iPad Pro display delivers both a wide color gamut and "True Tone" features, providing rich color reproduction and the ability to dynamically adapt the screen in relation to ambient lighting. Both of these features are unique to the new 9.7 inch model.

Putting premium new features on a mainstream model is somewhat novel for Apple. By introducing the latest, most advanced technology on a high end, premium priced product, it can pay for its design work and bring down component prices to the point where those same features can now be introduced on lower cost devices. However, the mainstream 9.7 inch iPad Pro is a relatively premium product itself, with an entry price of $599. That's a slight premium for an iPad, but a substantial premium over the Average Selling Price of generic tablets or even PCs.

The new 9.7 inch has half the RAM as the larger 12.9 inch model, but that didn't seem to noticeably impact the responsiveness of the machine, thanks in part to conservative memory management in iOS.

Additionally, the standard size iPad Pro has screen with 3.1 million pixels, compared to nearly 5.6 million on the larger iPad Pro. That means the A9X has less pixel work to do, allowing it to run at a slower clock and therefore run more efficiently in its a very slim case.

Another difference between the 9.7 and 12.9 inch iPad Pro models is that only the latter supports USB 3 speeds over the Lightning to USB adapter Apple sells. It's not clear why this is the case, as USB support should be built into the A9X chip itself, making this difference between the two models more difficult to explain. [update: as a reader noted below, the original 12.9 inch iPad Pro has a USB 3.0 controller chip outside of its A9X Application Processor, which the new 9.7 inch version lacks]. This also casts some doubt on whether Apple will bring USB 3 features to other iOS devices, including the upcoming iPhone 7. USB 3 would bring substantially faster file sync and rapid charging.

An iPad with great camera - gasp!

On the other hand, one example of both feature trickle-down and a unique feature of the new 9.7 iPad Pro is its rear camera, which is now on par with iPhone 6s. This appears to be the first time that an iPad has gotten a seriously good, modern camera.

iPad Pro has a 6s camera


The new 9.7 version also has a much improved 5MP front facing FaceTime camera featuring Retina Flash, just like the latest iPhone 6s. The previous 12.9 iPad Pro (like the new iPhone SE) uses a more basic 1.2 MP front facing camera on the level of an original iPhone 6. What's the point of a higher end camera on an iPad model? Apple depicts it as a useful imaging tool for a variety of business-related apps.

It appears Apple pulled out all the stops for the mainstream size of iPad Pro in order to significantly differentiate it from the basic iPad Air 2, which it continues to sell. There is no non-pro iPad competing for attention with the larger 12.9 inch iPad Pro, which has the same basic cameras as the iPad Air 2 and iPad mini 4.

Interestingly, Apple configures the 9.7 inch Air 2 and Pro models with different capacities, making it more difficult to directly compare the two. iPad Air 2 is offered in 16 and 64GB versions, while the new iPad Pro comes in 32, 64 and 256GB editions. The Air 2 is now priced starting at $399, while the 9.7 inch Pro is $200 more and the 12.9 inch Pro carries yet another $200 premium. That's about as simple of pricing differentiation as one could ask for. 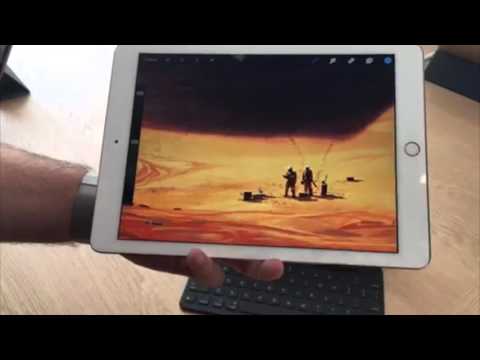 This also positions the mainstream 9.7 inch iPad Pro as the ultimate tablet for consumers and mobile pros, while giving businesses a reason to upgrade above the base Air 2 model. Having a Smart Keyboard option and Pencil support, paired with substantially better cameras and a very fast processor (not to mention the improved 4 speaker sound system) makes the 9.7 inch iPad Pro a business class offering.

In the company's January Q1 conference call, Apple's chief financial officer CFO Luca Maestri noted that "in the segments of the tablet markets where we compete, we continue to be highly successful," stating that "Recent data from NPD indicates that iPad has 85 percent share of the U.S. market of tablets priced above $200. And the latest data published by IDC indicates that iPad accounts for 67 percent of the U.S. commercial tablet market, comprising enterprise, government, and education."

With figures like those, Apple could be tempted to relax its pace and simply drive sales with product discounts the way other tablet vendors are. Instead, Apple is relentlessly focusing on making iPads substantially better across the board.

It's also telling that the new 9.7 inch iPad Pro is the only model available in Rose Gold, a finish that appears to have been designed specifically with China in mind.

The two new iPad Pro models, along with the 9.7 inch Air 2 and two versions of iPad mini (Apple continues to sells the mini 4 starting at $399, the same price as the very similarly equipped Air 2, along side an entry level, $269 iPad mini 2) provide buyers with a range of pricing options, but actually only cover three different screen sizes, two of which sport identical 2048x1536 resolutions. That results in a very streamlined platform for developers, who can optimize their apps for one basic resolution in addition to the larger format 12.9 inch iPad Pro.

It remains to be seen whether Apple can leverage its partnerships with IBM, Cisco and other developers to drive new growth in iPad sales, but as the company emphasized at its launch event, it sees great potential among low end PC users who are open to buying into a more mobile, simpler platform for getting work done.

There are already significant industries that are shifting workers to iPads, ranging from architecture and engineering firms in Japan to transit operators in Greater China, to domestic industries--including pharmaceutical giant Eli Lilly, which equipped 15,000 field-based personnel with iPads internationally, and announced an initiative to eliminate laptops entirely and upgrade its U.S. field sales teams with iPad Pro models.

With the rapid pace of incremental innovation being invested in iPads from the top down, Apple appears well positioned to define the next phase of personal computing.