Apple's eGPU work in High Sierra is impressive, but six more months will make it better

AppleInsider
Posted: September 4, 2017 5:41PM
in macOS
Looking at late betas of Apple's eGPU support in High Sierra, Apple has come a long way, and has made some of the technology changes and fixes that it needs for widest possible adoption -- but it's not quite there yet for the entirety of the Mac user base.

We're not going to go deep into what we've discovered about eGPUs and Thunderbolt 3 over the last few years here. As a general rule, putting a PCI-E graphics card into a Thunderbolt 3 enclosure and connecting it to a Thunderbolt 3 host system will hit you for about 10 percent of any given card's maximum potential performance-wise except for the newest, highest-end cards under massive load, where the losses jump to about 30 percent.

Before High Sierra, using an eGPU took a series of relatively simple hacks to enable the technology. It also needed the user to make some concessions about limitations.

That changed when Apple announced High Sierra, and made some changes to how macOS deals with it.

What Apple's fixed and changed along the way

In early implementations, you'd better have the eGPU hooked up before you boot. That's been changed -- if you "hot plug" an eGPU now, macOS will ask you to log out, then back in again. A restart is fine too.
For "us," eGPU support is ready now. But, it's not ready for the "computer as an appliance crowd" just yet.
Worse yet, if you yanked the Thunderbolt 3 cable with early versions, the system would immediately kernel panic and crash hard. That's better now, with it forcing an instant logout. Unsaved data still gets lost, but it beats the alternative.

In a piece about the developer's kit, we noted that Apple needed to implement "clamshell mode" -- and we can report that it has returned, to some extent. If the user selects to "mirror" displays, and shuts the lid on the host computer, the MacBook Pro's display now does turn off.

But, it doesn't automatically shift over to one display. If you haven't selected mirrored displays, macOS still considers the shut MacBook Pro to have it as a functional display -- and you can lose windows or your cursor over there if the lid is shut.

There is still a profound performance penalty if you "loop back" the video signal to the internal display on a MacBook Pro. It's possible with some hacks, but an already bandwidth-tight situation is made worse.

Thunderbolt 3's 40 gigabits per second is amazingly fast, but still not fast enough for a full-speed loopback without serious compromise. Maybe a future incarnation of the technology will be fast enough.

The financials behind eGPU enclosures

When AppleInsider first started in-depth examination of eGPU enclosures, cost was a major barrier to entry -- and the entry fee still isn't that small. But, it's gotten far better.

We've examined many, many Thunderbolt 3 docks at this point. Pricing varies between $189 and well over $300, just for "legacy" ports. 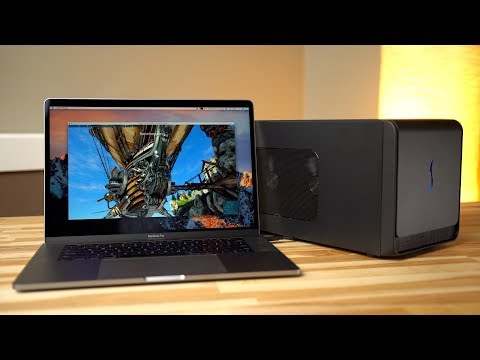 The Sonnet enclosure used in Apple's Developer kit isn't available at retail. However, one that only supplies 15W to host machines intended for lower-powered cards is $299, with the meatier one with 87W and enough power for the vast majority of cards will ship for $399.

The Sonnet enclosure isn't our favorite, though. The Mantiz MZ-02 sells for $389, provides full charging power to the 15-inch Thunderbolt 3 MacBook Pro, has five USB ports, and a High Sierra-compatible Gigabit Ethernet port.

So, for about $150 on the average, an eGPU enclosure gets you ports you may want back on the MacBook Pro -- plus the ability to plug in a PCI-e card to dramatically boost graphical acceleration.

The whole eGPU concept does work on an iMac. But, it's a harder sell. For the price of the enclosure plus the graphics card, just look at a better iMac instead.

What we don't want to see is anointed case and card combinations. An open case that adheres to the Thunderbolt 3 protocol, and a wide selection of compatible video cards to choose from will help the daring users who want to give it a shot.

That way, the Final Cut Pro crowd can get the optimized AMD cards, and the Adobe gang can get Nvidia, and everybody can live happily ever after in an environment optimized for what they need. But, regardless of manufacturer, a powerful video card is still faster than the Radeon Pro discrete chipset included in the MacBook Pro, even if not optimized.

And, finally, the technology isn't a kludge hacked together by the Mac faithful with too much time and money on their hands.

So, why not ship now?

AppleInsider readers are the tech savvy. Many of us have gone elbow-deep into an old aluminum slab-side Mac Pro, or crammed too many PATA drives in a G4 tower than the laws of thermodynamics should reasonably accommodate.

The entire computer industry has shifted to a less tinker-y mentality, though. Computing devices for the vast majority of users are now appliances like your toaster, or your refrigerator, and plunked down without thought of maintenance or tinkering.

For "us," eGPU support is ready now. But, because of the not-fully-implemented clamshell mode alone, it's not ready for the "computer as an appliance crowd" just yet.

It's still a long time until the spring of 2018. Let's wait and see what Apple has in mind.