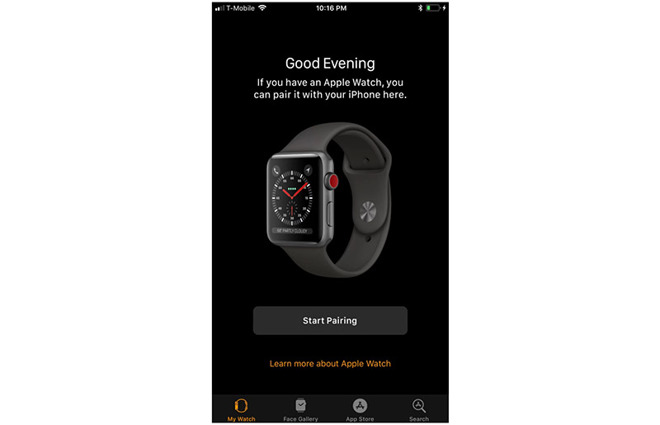 An image discovered within the supposed iOS 11 GM, sent to 9to5Mac, shows an Apple Watch pairing screen for iPhone that appears to include slightly redesigned Apple Watch.

Notably, a never before seen analog watch face seems to include cellular signal status bars -- or, more accurately, dots -- siting front and center just above a digital representation of a small second hand. This could be the first indication that Apple is preparing to launch a much-rumored LTE-capable wearable.

Further, the screenshot shows what appears to be complications for phone and GPS apps.

Last month, a pair of reports claimed that Apple would debut a cellular-connected Apple Watch later this year. With the new functionality, users will be able to download new songs in Music and ferry data to connected apps without need for a paired iPhone.

The refreshed device is rumored to sport the same basic form factor as current Apple Watch Series 2 devices, though the image presented in today's iOS 11 version shows a slightly tweaked external design. For example, the Digital Crown is now capped with a red dot.

Along with a new LTE-connected Apple Watch, Apple is expected to announce three new iPhones, headlined by a flagship "iPhone 8" with OLED screen, as well as a new Apple TV capable of 4K resolutions. AppleInsider will be at Apple Park covering the event live from 10 a.m. Pacific.