HomePod teardown needs sawing, cutting to get into interior, but is built 'like a tank'

AppleInsider
Posted: February 12, 2018 1:44PM
in iPod + iTunes + AppleTV edited February 2018
As it does with every Apple device, iFixit has torn apart the HomePod, finding a device that is a "labyrinth to open." That means, like many other devices, it's probably not a great candidate for user repairs.

Shortly after Friday's deliveries, iFixit took to disassembly. This assembly was a bit more invasive than most of the rest, finding glued shut threaded connections, an acoustical mesh that needed to be cut off, and a casing that needed a hacksaw to penetrate, given all the glue.

Specific discoveries inside the HomePod include a CX20810 analog to digital converter by Synaptics for the microphone array, conductive screw-posts providing power to most of the device like those found in the cylindrical Mac Pro, and a build suggesting durability "like a tank" so sitting on a shelf won't be an issue.

The A8 processor in the HomePod is "likely" supplied with 1GB of application RAM, but is certainly paired with 16GB of flash memory. There are a few locations on the main motherboard of the device that are unpopulated with chips, but have SMD pads, suggesting that the HomePod may have undergone some design changes late in the process.

However, the company criticizes the HomePod for very strong adhesives securing nearly everything in the device, including the touch input cover, microphone array, rubber foot, and the main point of entry on the top of the device.

Apple's $349 HomePod was revealed at the 2017 WWDC and consumers started getting their hands on it on Friday. The HomePod is powered by an Apple A8 chip featuring realtime acoustic modeling, audio beam-forming, and multi-channel echo cancelation. It also features a subset of Siri, optimized for music consumption. 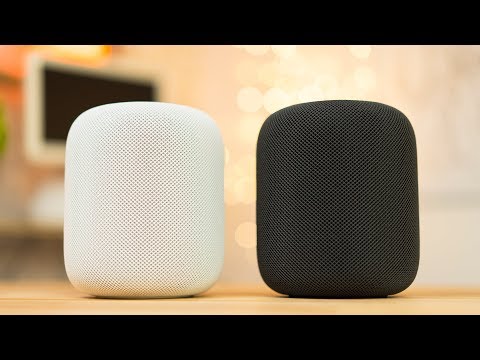