The Touch Bar on the MacBook Pro is well implemented, but serves no useful purpose

AppleInsider
Posted: July 7, 2018 7:18PM
in macOS edited August 2020
With the 2016 MacBook Pro came polarization of the user base. It wasn't just over USB-C, but also Apple's new Touch Bar as well. 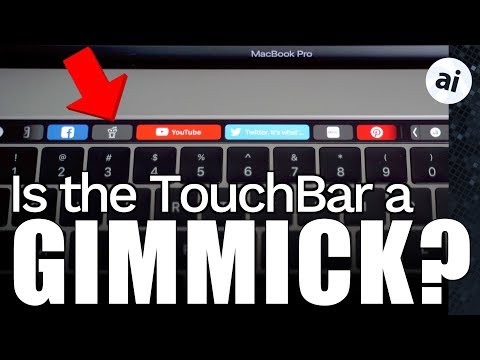 The Touch Bar was intended to appear and function as a dynamic OLED strip of virtual keyboard keys, unconfined by the physical structure of mechanical keys. Optimally, all the keys are context-sensitive, changing not just appearance but size based on what app the user is in, and what the user is doing.

After nearly 21 months of use, the verdict is still out on the Touch Bar here at AppleInsider. It's not a universal tool, and we don't use it for everything. Mileage may vary, user to user.

We said once that the the Touch Bar will take some time to mature and find its best uses. Out of the box, it hasn't really fulfilled its promise, but still has potential.

More on that potential in a bit.

Lacking as a video or audio editing tool

We do a lot of video work, as you can probably tell. The idea of a digital, customizable control panel that gives quick access to shortcuts was, and is, intriguing.

Anything that can speed up workflow is a welcome addition. We gave Apple the benefit of the doubt and tried our best to incorporate the Touch Bar -- but it just didn't' stick. 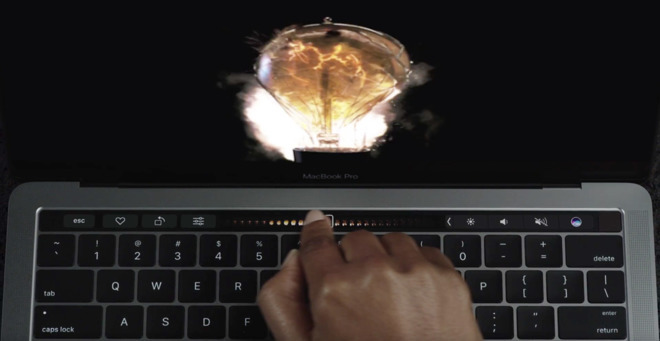 Touch Bar use is literally limited to display brightness and volume adjustments. In Final Cut Pro, you have buttons to use as shortcut but none of them are new or innovative and each one of them can be accessed faster by using the keyboard. We did learn a few more shortcuts that we didn't know about previously, but we just looked up the keyboard commands for them.

The best video editing feature of the Touch Bar is seeing the video timeline and being able to scroll. But, for maximum efficiency and speed, you're better off sticking with the keyboard plus mouse or trackpad.

We don't have any complaints about the hardware at all. It is quick, and updates rapidly. The images are crisp and clear, and the touch sensitivity is second to none. It's just not that good in actual use.

The Touch Bar has its uses for non-editors, but they are few and far between. Safari has a few niceties in Safari with open tabs, but given that you're looking at the screen to surf, this isn't the most convenient thing.

As we said talking about the 2017 MacBook Pro as a whole a year later, our Touch Bar use is generally limited to display brightness and volume adjustments. With some options, Touch Bar forces users navigate an extra menu to find certain settings, like adjusting the keyboard backlight and skipping audio tracks, tasks that take one simple keypress on standard function keys.

Some of these are Apple's user interface choices. Apple itself doesn't give users that much in the way of configuration options in this regard, but there is a way forward.

Third parties to the rescue!

Regarding potential, a third party app called Better Touch Tool allows users to completely customize the Touch Bar. In short, the bar can become a custom keyboard extension, with just about every parameter configurable for any given app.

At a touch, Better Touch Tool can also run Apple Scripts, and return a value to the Touch Bar. So, there are already info-dense tools available for it, including weather and stock tools. 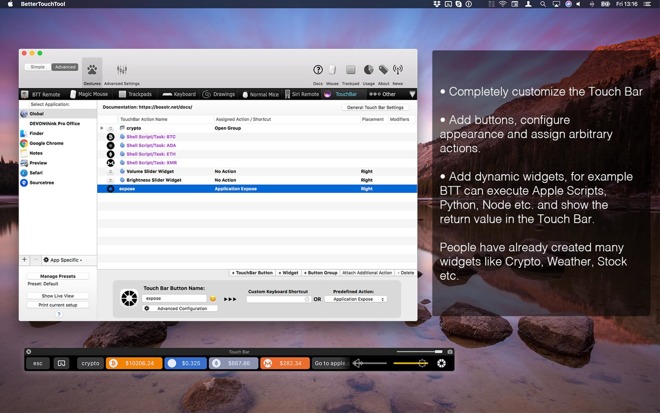 So, all those things that Apple didn't include for customization, Better Touch Tool can do.

There's a lot more that it can do, even for trackpad users. It's free to try out for 45 days, or it's included in a Setapp subscription.

There is another one we like called called 2Touch which isn't quite as robust, but leverages Apple's accessibility options to give the user a few more choices for the bar.

Probably not going away

We can't imagine a scenario where Apple decides to pull the Touch Bar. In all likelihood it will continue to offer a lower-end MacBook Pro with function keys, but won't make it optional across the line.

The Touch Bar could be great. It's got the ability to be great, as we've demonstrated. And, as we've said before, it has more to do with making the Mac easier for iOS users, than helping existing Mac users.

We can't help but feel that the Touch Bar is a transition to something else. While we'd prefer that tactile keys don't go away, between the short travel on Apple's Butterfly keyboard and the Touch Bar, we're starting to wonder if Apple wants to build a machine without a physical keyboard, and one with all virtual keys.