AppleInsider
Posted: October 2, 2018 7:07PM
in General Discussion edited October 2018
Once again, only Apple knows for sure when -- or even if -- it will hold an event this month, but it does seem very likely that Apple will want to capture the minds of consumers for two consecutive months. AppleInsider reveals why it's harder to predict a date for this one -- and what we can expect to see when it comes.

Two things happen the moment Apple's regular September event is over. Outside the company, we all wonder when or whether there will be another in October. And inside Apple, someone starts work on the next typically cryptic invitation.

What we all like when looking forward is hard evidence -- and there is some. There's strong reason to believe Apple will hold an event this month even though it didn't last October. There's also interesting historical evidence for when the event might be.

It's just that the same historical evidence makes it more difficult to predict a single date than we did with the September one.

History in the making

Steve Jobs died on October 5, 2011, the day after that year's October event where Apple had revealed Siri and the iPhone 4S. Since then there have been four October events in the seven years to date.

Three of those have taken place in the fourth week of the month and the only exception is 2014 when it was in the third week instead. From 2011 to 2014, Apple ran these October events on a Tuesday; since then it's been on a Thursday -- if it's happened at all.

The two years that skipped having an October event were 2015 and last year, 2017.

That 2015 omission is interesting. This was the year that the 4K Retina iMac was updated. That was on October 13, 2015, and at the same time we saw the Magic Mouse 2 and the Magic Trackpad 2. Two weeks later on October 26 we got the fourth generation Apple TV.

If the peripherals and the TV are reasonably small announcements, still Apple brought out that iMac refresh with just a press release like it did in 2018 to the MacBook Pro.

Then last year, there wasn't an October event and there weren't any October product launches either.

Trying to pick a date

Apple did famously drop out of the old Macworld conference because the company didn't like being held to another firm's annual schedule. It just segued into having its own annual schedule instead. At least, though, Apple can pick whatever date suits it and its manufacturing chain -- except no, it can't.

Samsung is launching a new Galaxy device on Tuesday October 11 so you can picture calendars in Apple Park with that date crossed out. 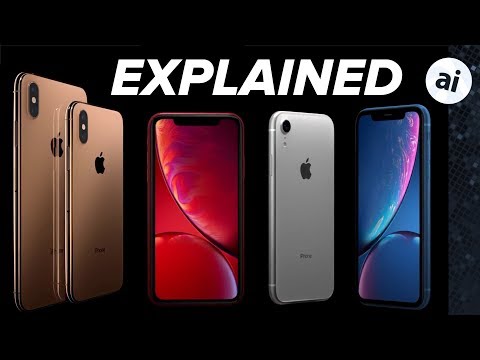 Then we do already know something about Apple's October plans because they've told us. The iPhone XR will be available to pre-order from October 19 and it will start shipping on October 26. Those are both Fridays: assume, then, that the phones will begin arriving in people's hands from Saturday, October 27.

It's a gigantic, simply gigantic job getting those phones to those people. Apple may not own the couriers, it may not fly the aircraft transporting them across the world. Yet just because Apple is used to it, that doesn't make the logistics any easier or any less of a stress on the company.

The iPhone XR starts at $749, a full $250 less than the iPhone XS, and it's expected that this price difference will make it the best-selling iPhone this year.

Analysts such as Ming-Chi Kuo estimate that overall Apple will sell some 85 million new iPhones of all types by the end of the year. However, the iPhone XR looks likely to account for over half of that .

So, while the estimated figures do specifically cover up to 2019, still you can reasonably expect that the majority will be sold at launch. So from October 26 there could be something approaching 30 million iPhone XR boxes en route to customers.

Back in 2014 when the iPhone 6 was coming out, anecdotal evidence from pilots said that Apple had chartered between 20 and 30 Boeing 747 aircraft purely to carry phones. Each aircraft was estimated to carry 195,000 iPhones.

That Apple can sell this many phones and that it can cope with shipping that many at the same time is remarkable. However, doing all of that and then releasing new iPad Pro models or iMacs shipping at the same time, fighting for air freight space wouldn't be remarkable, it would be foolhardy.

Apple is very smart about knowing when to release items to get the most publicity and attention for them. You can argue that they've already launched the iPhone XR, yet the 19th and the 26th will see a lot of limelight focused on them.

There's nothing to say that Apple couldn't hold another event even as the iPhone XR finally launches, yet it doesn't seem likely for such a news-aware firm.

Then, too, there is another event outside Apple's control: the annual Jamf conference runs from October 23 to 25. Jamf is a system for corporate and enterprise customers to manage gigantic numbers of iOS devices. So some of the very people you want to be watching as you launch, say, a new iPad Pro, are going to be a bit tied up for those three days.

It might be nice if those people at the Jamf conference were fully briefed about any new iOS devices so you could reasonably expect that Apple has timed its event to happen before that. Only, if you exclude the years Apple didn't do an October event, there has been only one Jamf conference that took place after a special event.

There is one more historical fact that may point to when this year's event will be.

So when you even hear that an Apple invitation has been released for an October event, you can guess exactly when the date is.

What's in the event

Oddly, this time around it's easier to say what is going to be in the event than when precisely it will be.

That's because there were so many solid rumors backed up by supply chain and other evidence to fill September's event three times over. Sources who got the details right about the new iPhones and Apple Watch Series 4 continue to point to there being more up Apple's sleeves before the end of the year.

Rumors suggest the new iPads will take on design elements from the iPhone X such as the drastically reduced bezel around the display screen.

Alongside this, analyst Ming-Chi Kuo claims that the iPad Pro will come in an updated 12.9-inch model and a brand new 11-inch one.

Although this is not as solidly backed up as the iPad rumors, Kuo does also claim that there will be a refreshed iMac. It's specifically said to have an improved screen and, possibly supporting this idea, this week Apple informed its stores that its supplies of some existing iMac screens were low.

Apple's other desktop, the Mac mini, is similarly rumored to be getting updated with a "professional" remake, but more attention from the mainstream consumer is being focused on Kuo's claim that there will be new -- and cheaper -- MacBooks.

We've stuck to where there is at least decent evidence of a new product coming and we're not even trying to weigh up whether there will be new HomePods, AirPods and the mythical AirPower. There won't be.

What there almost certainly will be, however, is something missed out. Apple tends to be careful and deliberate about what it releases when while those of us predicting from supply evidence tend to be anything but.

The odds are that there will be an October event, and that Apple will release some of these products -- and not all.

Given that we're so keen on hard evidence and given that October 2018 is proving to be an unusually tricky month for Apple to have an event all things considered, still we're going to call it.

Unless Apple just decides to email out a press release and be done with it, we say there'll be an event on Thursday October 25. It'll be at the Steve Jobs Theater and Tim Cook will announce incredible pre-order figures for the iPhone XR.

It will concentrate on the iPad Pro and pre-orders for those will be announced for the end of the month with shipping in November. We're less sold on new Macs at the release, though.

This fits in with everything else in the month and it gets Apple the chance to boast about iPhone XR sales. It also lets them make a splash with a big iPad announcement without then immediately overloading those 747s. And yet it still gives Apple just about the longest run-up to Christmas possible.

Consequently we're pretty sure. We'd even say that we'd put money on this being the right date, but on the one hand we're not sufficiently certain and on the other we want to save that money in case there's a new iMac.