AppleInsider
Posted: October 30, 2018 2:49PM
in iPad edited January 2020
Apple has revealed major changes to the iPad Pro lineup, with new models sporting an iPhone X-inspired design with near edge-to-edge displays, as well as the removal of the Home button in favor of using Face ID. 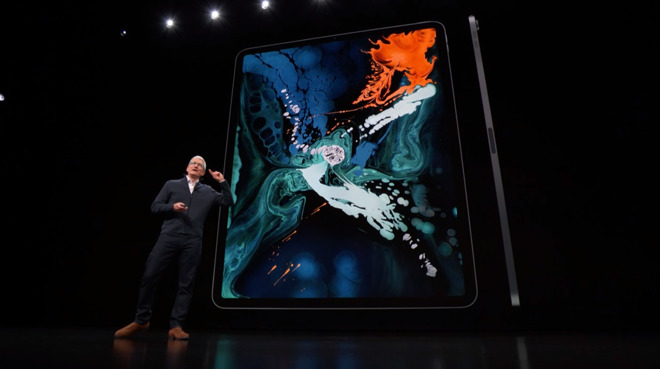 The new models, all running on iOS 12, depart from the previous design language used in the iPad and earlier iPad Pro models, with the large bezels replaced by a thinner version, giving the impression of the screen taking up more room on the front of each tablet.

In order to enable the almost edge-to-edge design, Apple has removed the Home button from the front of the iPad Pro. As its replacement, Face ID performs authentication, as well as providing the same Animoji and MeMoji functionality as the iPhone X, while similar gestures to unlock and access other elements have made the transition from the smaller screen.

Unlike the implementation used on the iPhone X and iPhone XS, the TrueDepth camera system is not housed within a notch at the top. Instead, there is enough of a bezel around the edge to allow for the camera array to be installed without encroaching into the main display area.

The move to the iPad has led to changes in the way Face ID functions, with it now able to recognize the user's face regardless of its orientation. The removal of Touch ID has also led to it using the gestures introduced with the iPhone X, including swiping up to return to the Home screen. 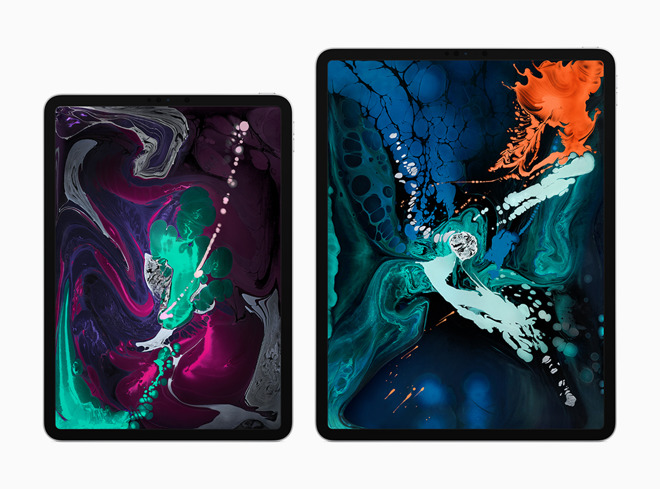 In terms of size, the larger 12.9-inch model keeps its screen dimensions but gains a smaller enclosure, while the 10.5-inch version has been increased to 11 inches, with the bezel changes allowing it to fit in within the same-sized body without majorly changing the case dimensions. Both models are 5.9mm thick, with the size changes now making the 12.9-inch iPad Pro 25 percent smaller in terms of volume, while the 11-inch version weighs just one pound.

The screens are LCD Liquid Retina displays with rounded corners, using the same pixel masking techniques as used on the iPhone XR, as well as a new backlight design. Support for wide color, True-Tone, and the 120Hz ProMotion technology are also included.

Powering the two models is the all new A12X Bionic, produced on a 7-nanometer process and consisting of 10 billion transistors. The 8-cores onboard include four performance cores and four for efficiency, with single core performance up 35 percent and multi-core workloads 90 percent faster. Apple claims the iPad Pros are faster than 92 percent of all portable PCs sold in the last year. 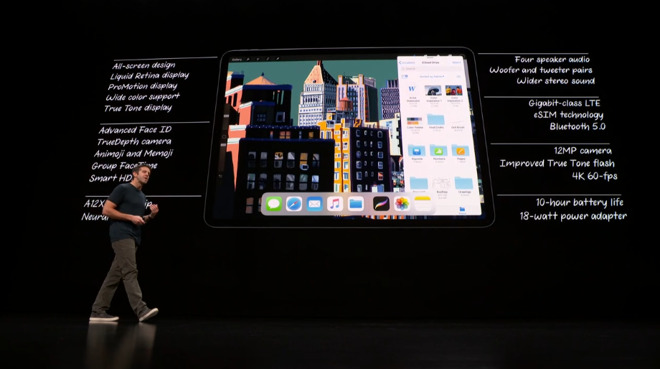 The apple-designed graphics processing of the iPad Pros consists of a 7-core GPU, which is said to be a thousand times faster than previously. It is said to be the equivalent of the graphics of an Xbox One S, in a product that's 94-percent smaller.

The chip also uses the latest generation of neural engine, capable of 5 trillion operations per second.

A major change to the iPad Pro line is the change from using a Lightning port to USB-C. The change enables the iPad Pro to connect to data accessories and 5K displays at the same time. It is also possible to charge out from the iPad Pro to another device using USB-C, so an iPhone could be recharged by being connected over USB-C. 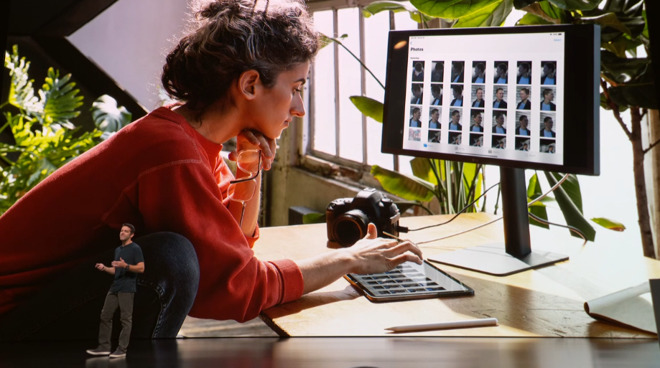 While the new models switch the front 7-megapixel camera for a similar-resolution TrueDepth camera, the back version is still a 12-megapixel shooter, equipped with Smart HDR, a quad-LED True Tone flash, and an f/1.8 aperture. It continue to be able to record 4K video at up to 60fps, with 120fps at 1080p and 240fps at 720p slo-mo video options.

The new models continue to use four speakers for audio, this time with woofer and tweeter pairs. There is also Gigabit-class LTE connectivity, as well as eSIM support for cellular network access.

Supplying power to the iPad Pros is an 18-Watt USB-C adapter, one that Apple was previously rumored to be working on, but doesn't appear to be available separately from the devices. Battery life is rated at 10 hours for both models.

The new iPad Pro models are available in 64-gigabyte, 256-gigabyte, 512-gigabyte, and 1 terabyte storage capacities, in a choice of Silver and Space Gray finishes. The range starts from $799 for the lowest-capacity 11-inch model with Wi-Fi, rising to $949 for the Wi-Fi+ Cellular model, and up to $1,699 for both cellular and a 1-terabyte capacity. The 12.9-inch versions start from $999 and $1,149 for Wi-Fi and cellular variants respectively at the smallest capacity, increasing to $1,899 for 1 terabyte of storage and cellular connectivity.

Pre-orders began shortly after the event concluded, with orders shipping as soon as November 7.

AppleInsider is at the "There's more in the making" event live, where we expect new iPad Pros, and maybe even new Macs! Keep up with our coverage by downloading the AppleInsider app for iOS, and follow us on YouTube, Twitter @appleinsider and Facebook for live, late-breaking coverage. You can also check out our official Instagram account for exclusive photos.
«1234567»