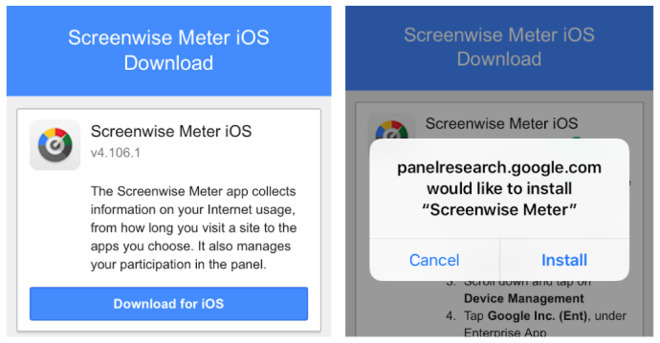 The restoration of privileges was first noted by Bloomberg reporter Mark Bergen in a tweet and later confirmed by TechCrunch.

In a statement, a Google spokesperson said they "can confirm that our internal corporate apps have been restored," the publication reports.

Google relied on its Enterprise Certificate to enable sideloading of the Screenwise Meter app, allowing the company to effectively skirt the App Store's stringent privacy policies. Following an expos by TechCrunch, Google voluntarily shut down the program on iOS and offered an apology.

Facebook found itself in a similar situation this week after a report exposed a data gathering program called Facebook Research. Like Google's Screenwise Meter, Facebook Research paid users to sideload a VPN app on iOS, granting root access to host devices for the purpose of collecting usage data.

Facebook's certificate was revoked on Wednesday and ultimately restored on Thursday.

Apple framed both Google and Facebook's programs as violations of its developer guidelines. As noted in Apple's terms of use, Enterprise Developer Certificates are designed expressly for the distribution of private software within corporations. Facebook, for example, relied on the certificate to disseminate unreleased betas, internal communications apps and other software to tens of thousands of employees.
«12»