AppleInsider
Posted: March 25, 2019 6:11PM
in iPhone edited April 2019
After two years of buildup, Apple CEO Tim Cook has announced what he called a "sneak peek" of the programming that his company's content service will include. The new service is to be called Apple TV+, but no pricing or confirmed start date was revealed. 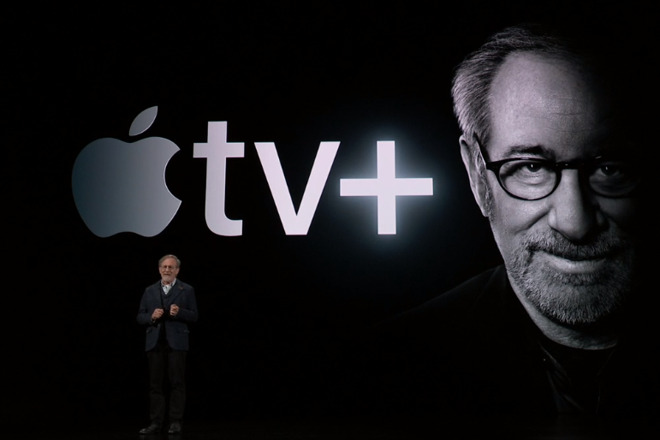 Tim Cook took to the stage at the March 25 event to deliver what he ultimately called a "sneak peek" at the new streaming video service called Apple TV+. In a presentation that was replete with star names, Apple would only say that the service is coming this Fall and be available via the Apple TV app. No pricing was announced nor whether Apple would offer bundles with its existing Apple Music or forthcoming Apple News+ services.

The event's headline celebrity was Oprah Winfrey. "We have this unique opportunity to rise to our best selves in how we choose to use our technology and our humanity," she said. "To face the daunting challenges of our time. Each of us comes to this Earth with a deep potential that yearns to be fulfilled. We all crave connection, we search for common ground. We all want to be heard but we also need to listen."

Greeted by cheers from the audience, she explained how she was making documentaries and also bringing her famous book club to this new service. "That's why I have joined forces with Apple," she said. "Because they're the company that has re-imagined how we communicate. I joined to help serve this moment." 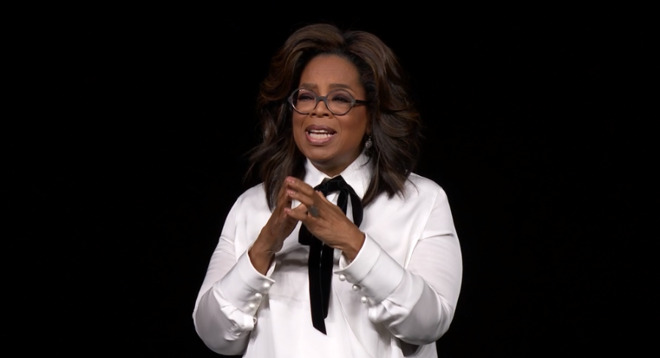 Apple is promising to tell the best stories ever told with Apple TV+. The service was discussed by Jamie Erlicht and Zack Van Amburg, alongside a host of Hollywood stars and content producers, including Stephen Spielberg, Ron Howard, and more.

Steven Spielberg was the first celebrity guest on stage after the video, and he introduced his forthcoming remake of "Amazing Stories." 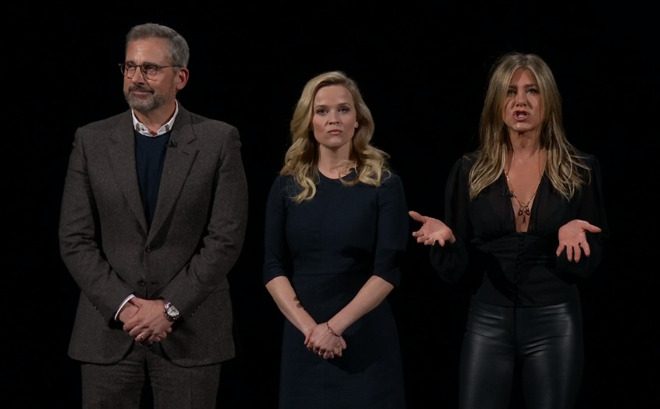 Jennifer Aniston and Reese Witherspoon then unveiled their drama "The Morning Show," which is about a news programme and the people who work on it. "You can't have a show about the dynamics between men and women without a male," said Aniston.

"I am happy to provide the manliness!" said co-star Steve Carell.

Jason Momoa and Alfre Woodard introduced "See", a new science fiction drama written by "Peaky Blinders" creator Steven Knight. "It asks the question, how much of our experience in life is visual," said Woodard.

Other shows unveiled included a new preschool series about coding and a music comedy/drama called "Little Voice" by Sara Bareilles and JJ Abrams.

Behind the scenes talent

Apple announced the hiring of Jamie Erlicht and Zack Van Amburg on June 16, 2017. The pair are former Sony Pictures Television executives, as co-heads of video programming. Previously the two were responsible for programming like "Breaking Bad" and "The Goldbergs."

"It will be an honor to be part of the Apple team," said Erlicht in a statement at the time. "We want to bring to video what Apple has been so successful with in their other services and consumer products -- unparalleled quality."
«12345»