AppleInsider
Posted: April 30, 2019 3:19PM
in Future Apple Hardware edited August 2020
Touch ID could make a return to the iPhone without requiring a fingerprint reader in a home button tat can ruin the clean appearance of the smartphone's screen, as Apple has considered the potential for turning the entire display into a fingerprint reader by taking advantage of acoustic imaging. 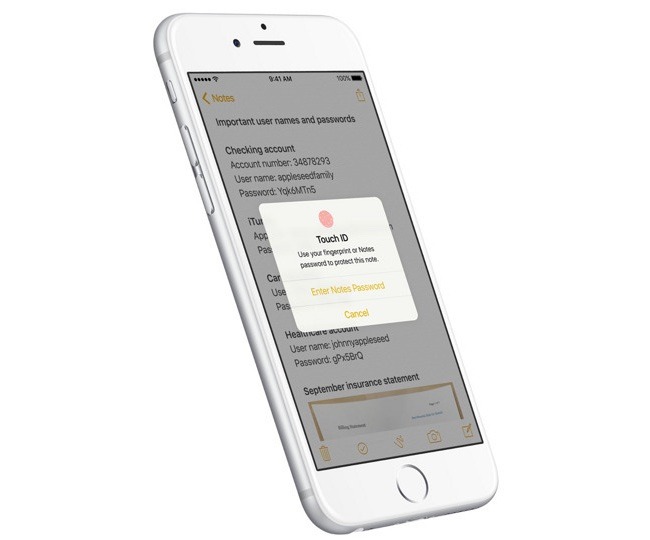 Touch ID, a form of biometric authentication not offered by current iPhone models

Apple replaced Touch ID with Face ID in the iPhone X, a system that is said to have a far lower false positive rate compared to Touch ID, making it an ideal biometric authentication system upgrade for the iPhone. The use of the TrueDepth camera array also means that there is no need to place a fingerprint reader on the front of the iPhone, an addition that prevents the use of an edge-to-edge display and also introduces an element to an otherwise clear display when the iPhone is turned off.

While a general improvement over Touch ID, Face ID still has some flaws that Touch ID continues to be better at, such as unlocking the iPhone without looking at it , or with it still stored in the user's pocket. There are also times in the day when a user may wish to authenticate with their device but it is impolite to bring the device out in view of others.

Apple had the opportunity to follow the design ideas of some Android vendors in putting a fingerprint reader elsewhere on the iPhone, but it elected to simply remove it completely. A pair of patents indicate Apple is still thinking about how it could bring back Touch ID while maintaining the appearance of an iPhone XS-style device.

The first patent, granted by the US Patent and Trademark Office on Tuesday and titled "Methods of biometric imaging of input surfaces," effectively describes an acoustic imaging system for a surface. By using a combination of acoustic transducers to vibrate a surface in a specific way, it can effectively turn the entire display into a fingerprint reader.

The wave from the transducers come into contact with the fingerprint ridges, changing how the wave moves through the surface and sending reflections bouncing away. An image resolver uses electrical signals gathered from other acoustic transducers in the display to create an entire image of elements in contact with the display, and in turn, where the ridges of the fingerprint reside. 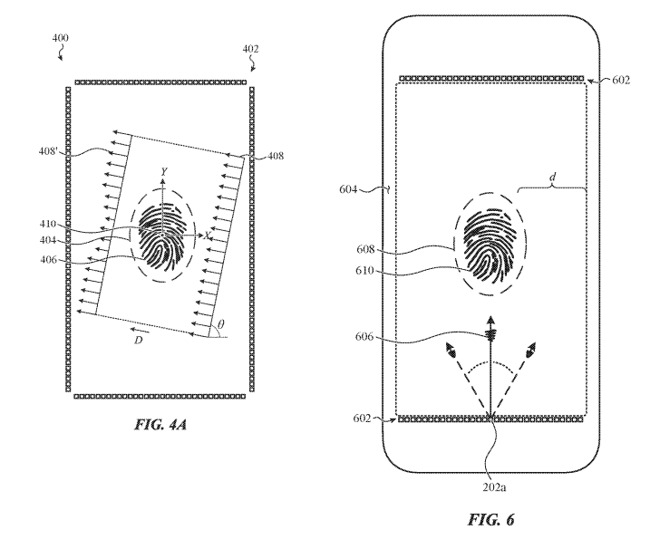 An example of transducer placement and how waves can travel as they interact with a fingerprint.

By knowing the position and size of the in-contact ridges, the image resolver is able to produce an image of the fingerprint or thumbprint, which can then be compared with registered versions for authentication.

In the patent, Apple adds how there could be filters for electrical signals before and after the wave's generation, a ramp filter for the image resolver, the use of a "substantially planar wavefront, to direct pulses over a specific defined area of the display, and being directed along a specific angle to maximize the ridge detection.

Other elements can include using the touch input sensor for the display to identify areas where the user pressed the screen with their finger for more detailed scanning without examining the whole display. The use of preamplifiers, gain correction filters, and a Radon Transform of a contact area are also suggested.

The second patent, granted the same day and with the name "Acoustic imaging system for spatial demodulation of acoustic waves," covers the same subject area with a relatively similar technique, except that it goes into greater detail relating to transducer placement.

Variations on the theme include where the distance between the sets of transducers is based on the material properties of the input surface, or is one quarter of a wavelength of the mechanical wave, or based on the speed of travel of the mechanical wave. It is also suggested the sets could be mounted to the bottom surface of the input layer, and the transducers are made from an electrically-stimulated expanding and contracting material.

In this particular patent, it is explicit in suggesting the object being detected "is a finger," while the user input surface could be formed from "glass, sapphire, or metal," with the obvious application being a touch-enabled display. 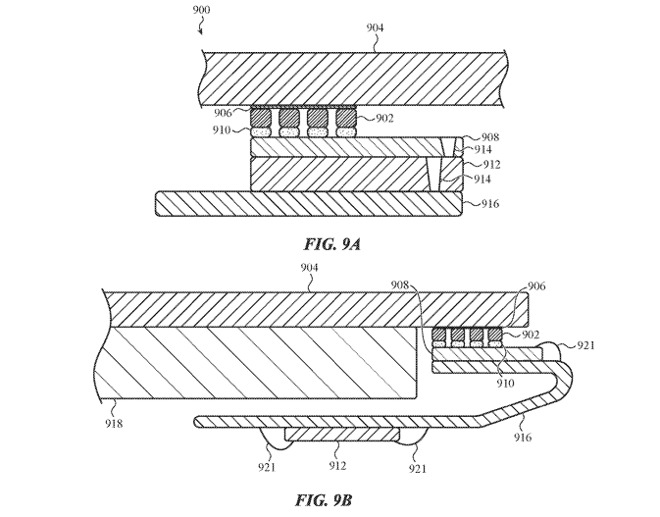 Apple files numerous patents and applications with the USPTO on a weekly bases, and while filings may not necessarily make an appearance in a future Apple product or service, it does however indicate areas of interest for the company's research.

This is not the first time Apple has explored the possibility of making an acoustic-based full-screen fingerprint reader. In February, it gained a patent for the "Acoustic pulse coding for imaging of input devices" describing effectively the same sort of system as the latest filings.

In February 2017, an "Acoustic imaging system architecture" suggested the use of acoustic pulses and waves from transducers to perform reflection-based analysis of objects in contact with a surface. Another surfaced in August 2017 for a sub-display fingerprint recognition technology using acoustic imaging, but used a system of integrated transducer controllers capable of operating in both drive and sense modes.
«12»