AppleInsider
Posted: May 9, 2019 11:21AM
in General Discussion
Intel intends to ship 10-nanometer processors in June, the company claimed during its investor meeting, with the further intention of shipping products made using a 7-nanometer process in 2021, something already being used commercially by chip producer rival TSMC for Apple-designed A-series chips. 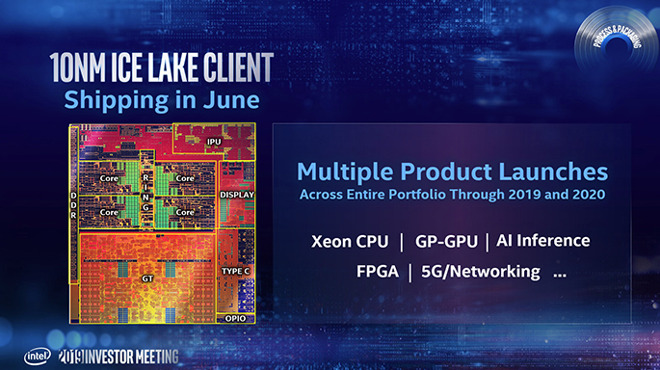 The road to producing 10-nanometer processors has been filled with delays for the major processor manufacturer, which has largely kept to using its well-established 14-nanometer process for its launches rather than shifting to a smaller version. Since it attempted to put out a single 10-nanometer process in 2018, it has kept quiet about the delays, and at one point had to deny claims it had abandoned its fabrication process completely.

At the investor meeting, Intel claimed the "Ice Lake" 10-nanometer processors it teased in January will be shipping, starting in June. Ice Lake processors are tipped to provide double the video transcode speeds and graphical performance of previous versions, as well as three times faster wireless speeds and between 2.5 and 3 times faster AI performance.

The first volume shipments of 10-nanometer processors will be intended for mobile devices, like notebooks and tablets, with the first products using the chips tipped to arrive on the market in time for the holidays.

Intel also aims to launch multiple 10-nanometer chips throughout 2019 and 2020, including client and server chips, those under the Agilex family of FPGAs, the Nervana NNP-I AI inference processor, a "general-purpose GPU," and the "Snow Ridge" 5g-ready network system-on-chip.

There was also an update on the 7-nanometer process Intel is working on, a die shrink that is claimed to offer double the scaling and a 20-percent increase in performance-per-watt with a four-times reduction in "design rule complexity," namely making them easier to design.

Intel is hoping to use extreme ultraviolet lithography (EUV) in the foundry process, which it hopes will help drive scaling for multiple generation nodes. The main release under 7-nanometer will be an Intel Xe "architecture-based, general-purpose GPU" for use in high-performance computing and data center AI applications.

Intel anticipates the 7-nanometer general purpose GPU will launch in 2021.

Movement to update its chip foundry process may be of some comfort to companies like Apple, which are strongly considering the possibility of shifting its Mac product lines to use a self-designed processor instead of relying on Intel's offerings. The repeated delays in 10-nanometer chips have affected Apple's product plans on a few occasions, such as constantly delaying support for 32GB memory options in the MacBook Pro line until Apple simply gave up on waiting for a chip that supported LPTDDR4 and instead went for one that used DDR4.

The shift towards 10-nanometer and even 7-nanometer will also be of limited comfort to the company from the view of investors, who can see chip foundry TSMC actively using a 7-nanometer process to make Apple's A-series chips used in iOS devices, and is already planning 6-nanometer processes and smaller.
«12»