AppleInsider
Posted: May 29, 2019 1:25PM
in iOS edited May 2019
Apple has published a new page explaining how the App Store is a safe place for consumers and developers to do business, a page that is likely to have been created in response to a Supreme Court decision allowing an antitrust lawsuit alleging Apple has a monopoly over iOS apps. 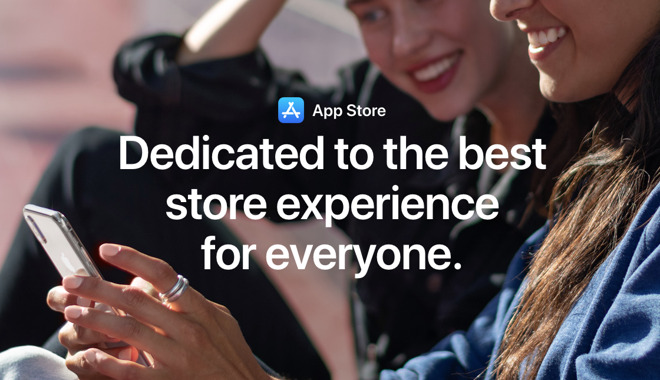 The new page, titled "App Store, Principles and Practices," aims to reassure consumers and developers the App Store is a "safe and trusted place" to discover and download apps, and a "great business opportunity" for app producers. Touting a responsibility for ensuring apps maintain a high standard for "privacy, security, and content," the page insists "nothing is more important than maintaining the trust of our users."

Explaining steps Apple takes to ensure questionable apps with over-the-line content or behavior are rejected by the store, the page highlights the existence of the App Store Review Guidelines, which may not necessarily be known to consumers who browse the App Store.

The app review process combining automation and "hundreds of human experts" is also touted, along with the revelation there is a 60-40 split in approved and rejected apps, and that most of the approximately 100,000 app review submissions performed each week are performed within 24 hours.

The page also draws attention to how Apple gave developers a platform for their apps, including how there are 20 million developers in the Apple Developer Program, and the generation of over 1.5 million US jobs and over 1.57 million European jobs.

"We're proud that, to date, developers have earned more than $120 billion worldwide from selling digital goods and services in apps distributed by the App Store," the page states.

The appearance of the page is likely an attempt by Apple to control the conversation regarding monopoly accusations, following the US Supreme Court's vote on May 13 to allow an antitrust lawsuit against Apple to proceed. Apple v. Pepper alleges Apple's monopoly has led to artificially inflated app prices due to the App Store being the only sanctioned place for iOS downloads, preventing competing stores from being able to sell apps for the platform.

Shortly after the vote, Apple insisted it was confident it will be able to prove "the App Store is not a monopoly by any metric."

On May 23, another class action lawsuit was launched levying similar artificial price inflation and monopoly claims, as well as suggesting Apple's typical 30% transaction fee would be smaller if competing app stores were available.
«12»