AppleInsider
Posted: June 10, 2019 6:54PM
in Current Mac Hardware edited December 2019
The new Mac Pro is a highly modular computer, making it ripe for upgrades and on-site servicing. But, the connector used for the built-in storage suggests replacements may have to be bought from Apple directly. 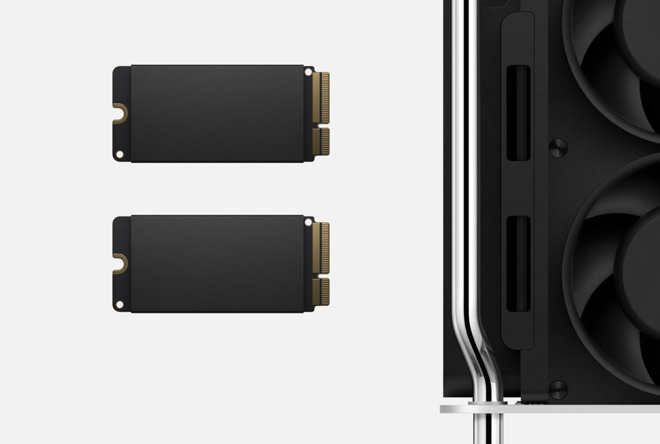 At the launch of the Mac Pro, Apple revealed there would be a number of options available for the built-in storage for the device. Starting from 256 gigabytes, Apple advised there were configurations that provided up to 4 terabytes of SSD storage, and to match the modular nature of the rest of the Mac Pro, the memory is also able to be removed and changed.

There are, however, questions about how serviceable the storage actually will be in reality, once it ships this fall.

The storage for the Mac Pro is made up of two separate sections: The SSD modules, and SATA expansion, with the latter previously explored by AppleInsider. 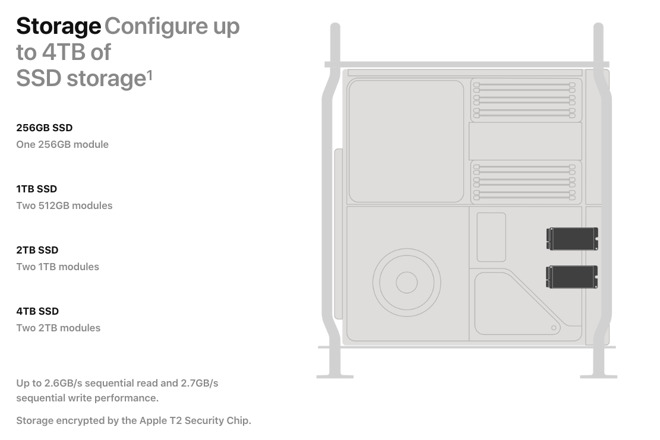 The storage section of the Mac Pro product page

Apple also supplies an image of two modules, illustrating that they are placed into the back portion of the Mac Pro, in the same compartment as the memory. But ultimately Apple stops short of saying what connector or technology is being used.

The information Apple provides isn't enough detail to confirm what kind of SSDs are being used by the Mac Pro, but what the image reveals is that it isn't any standard SSD that is in use with other devices.

An example of an M.2 connector

The first thought is that it is an M.2 SSD of some description, as the body shape looks quite similar to that type of component. However, the way that the two sections of pins are divided is slightly closer to the center with Apple's SSDs, whereas M.2 connectors have a longer main section and a smaller secondary pin area, or two breaks in the connector.

It also doesn't use the same configuration as Optane memory, which is similar to M.2 except it has two small pin offshoots on either end with a long section in the middle.

An example of a connector used for Optane storage

The nearest in terms of the division's placement would be mSATA, which seems to have the right proportion between the two sections to match what is shown in the image. However, the number of pins shown seems to be different to what mSATA drives use.

An example of an mSATA connector

A follow-up to M.2, the U.2 connection, formerly known as SFF-8639, is also not a possibility despite offering NVMe-style high-speed connectivity. Rather than having a break or a gap in the length of the connector, there is a thicker section that also includes pins that are raised away from the other two areas. 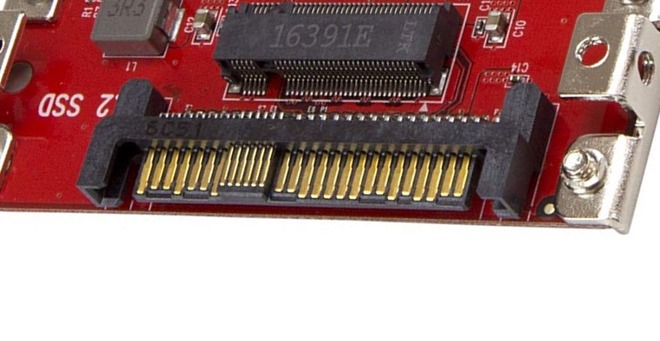 An example U.2 connector in an adapter

It also doesn't appear to be the same sort of connection Apple uses in some of its other products, as far as AppleInsider is aware. For example, the 13-inch MacBook Pro for late 2016 does have a removable SSD. However, while the proportions of the two sections of the connector are similar, the division has the opposite bias and effectively mirroring what the Mac Pro uses, ruling that one out.

Sources inside Apple not authorized to speak on behalf of the company say the drives do not use a standard M.2 pinout, but declined to speak about the slot's pin compatibility with older Apple SSD modules. This does leave open the possibility Apple is using a connector it previously created or has since modified.

It is highly likely that the connection is a proprietary one, very similar or identical to the iMac Pro, although though the exact details of pins, measurements, and other things won't be truly known until Apple ships the new Mac Pro, or some sort of support documentation leaks ahead of its release.

One way that we know that the drive cannot be mSATA, despite the closeness to the general shape, is the quoted performance of the drives.

At its core, mSATA can only provide SATA-level speeds at best, which can be up to 6 gigabits per second. Apple's speeds of around 2.6 gigabytes per second, and as SATA speed equals approximately 600 megabytes per second, this effectively rules out mSATA as a candidate.

NVMe drives are able to use the similar M.2 form factor, along with U.2, but are able to provide considerably higher read and write speeds than SATA SSDs, sometimes up to 3.5GB/s. Though unconfirmed, it is probable that these drives in particular use NVMe.

As Apple has established that the Mac Pro is a highly modular system, and that the included drives are also removable, it stands to reason that Apple will offer the opportunity to replace or even upgrade the drives after purchasing. This does leave open some questions, such as whether Apple will be the source of the replacements, will it offer drives separately for upgrades, or if aftermarket options will also be available.

Considering how Apple is using the T2 chip to secure these drives, it is likely to be in Apple's interests to provide upgrade options for these modules, or at the very least replacement drives for servicing, in order to maintain control over security.

These two storage modules are not the only route to upgrade the storage capacity of the Mac Pro. There are a few other methods that could be available to use, which may be more cost-effective than paying upfront for higher-capacity drives, as well as to expand the storage at a later time.

The main option is through SATA, using the two ports located high up on the main compartment. There aren't any extra drive bay slots or holders within the Mac Pro, so consumers will have to use aftermarket options, like those offered by Promise. 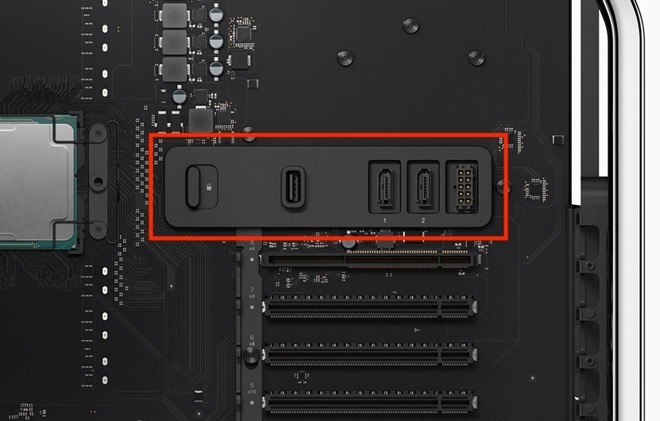 Part of the Mac Pro that includes two SATA connections, among others

Those looking for high-speed storage may not want to use SATA due to the relatively low performance, but they are helpful as a last-ditch effort to add more capacity when all other avenues are exhausted.

A secondary method is to take advantage of the ample PCIe slots the Mac Pro offers, and to use it for storage. There are PCIe card adapters that can hold SSDs as well as NVMe, with the latter able to offer high-speed data transfers, along with cards with built-in storage. 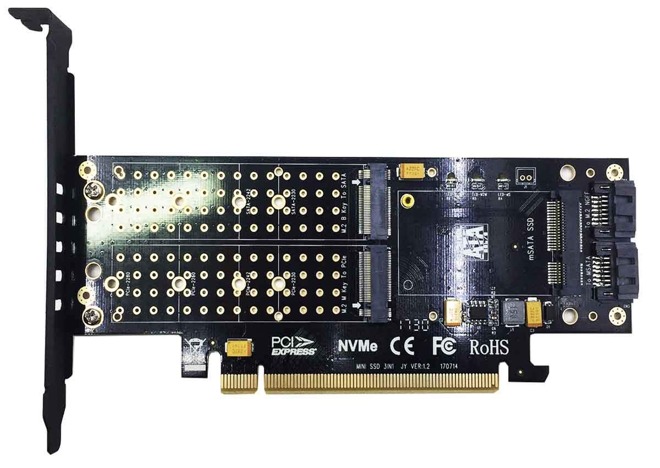 An example PCIe adapter card that can be used with NVMe

A third option is to use MPX Modules, the hardware format that Apple introduced alongside the Mac Pro. While it has a main focus on high-powered GPUs, it is still effectively an enhanced PCIe system.

In the case of Promise, its Pegasus R4i is an MPX RAID module that contains four 7200 RPM drives, transferring data over PCIe while being powered by the MPX bay power header.

There is also the possibility of using external storage, taking advantage of the Thunderbolt 3 connections to access an external drive enclosure, albeit it is one that is likely to be used for projects confined to portable storage moved between workstations. Internal storage is usually desired more before turning towards external versions.
«12345»