Apple's App Store generated 80% more revenue than Google Play with a third as many install...

AppleInsider
Posted: July 3, 2019 10:31PM
in iOS
Apple's iOS App Store continued to dominate the worldwide market in terms of revenue gained from premium apps and in-app purchases over the first half of 2019, with the online storefront generating nearly 1.8 times the revenue of rival Google's store for Android devices. 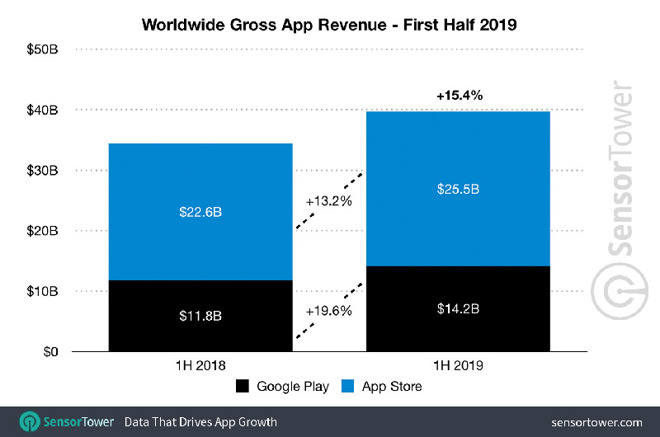 According to new statistics from Sensor Tower, the iOS App Store raked in an estimated $25.5 billion worldwide in the six-month period ending in June, up 13.2% from $22.6 billion in the first half of 2018.

First-time installs decreased to 14.8 billion, down 1.4% year-over-year on the back of a poor first quarter showing in China. App Store downloads increased in the second quarter of 2019, up 3% year-on-year, but the uptick was not enough to offset China's quarter one slump.

Despite the downturn in installs, Apple's $25.5 billion in revenue easily topped that of the Google Play store, which managed $14.2 billion over the same period. Despite the comparatively low figure, Google's Android storefront exhibited higher growth, with gross revenue jumping 19.6% year-over-year.

Perhaps contributing to Google's revenue boost is a 16.4% increase in installs, which hit an estimated 41.9 billion in the first half of this year.

Combined, iOS and Android users spent an estimated $39.7 billion on apps over the half, up 15.4% from the $34.4 billion notched in the year-ago half.

Taking a closer look at segment performance, games brought in an estimated $29.6 billion across both stores, up 11.3 percent from the same time last year. Due in part to slow China sales earlier this year, App Store games revenue grew 7.8% to reach $17.6 billion for the first half, while Google Play grew 16.8 percent to hit $12 billion.

Games downloads were down 1.4% on iOS and up 4.6% in the Google Play store, Sensor Tower said.

Due to its user base, content quality and pricing strategy, Apple's storefront consistently beats out competitors in terms of outright value. The latest statistics also demonstrate recuperation of the Chinese market, which saw decreased consumer spending in the first quarter of 2019.
«12»