USB 4 is here, and is essentially Thunderbolt 3

AppleInsider
Posted: September 3, 2019 4:14PM
in Future Apple Hardware edited September 2020
After a tease in March, the USB Implementation Forum has declared that it has completed the USB 4 standard, implementing the USB-C connector, plus 40Gbps speed and other features of Thunderbolt 3. 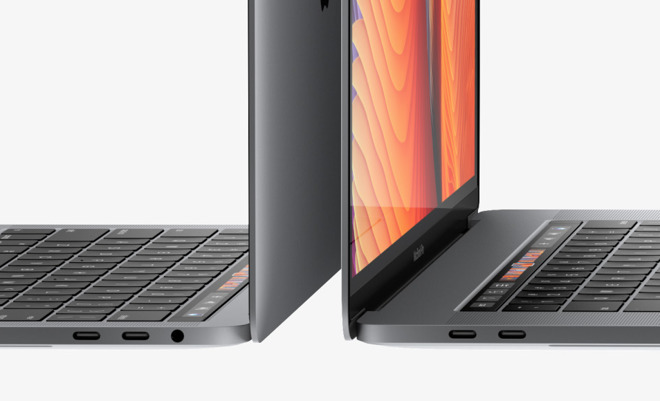 The USB Implementers Forum has announced that revealed USB 4 is finalized for wide deployment. While the implementation of USB 4 by vendors may be a long time away from happening, the draft specification itself is expected to be published later in 2019.

The specification spans Thunderbolt 3, as chip producer Intel has contributed Thunderbolt 3 to the group. The inclusion will effectively make it easier for vendors to produce devices using the technology at a cheaper rate than at present, and possibly without any of the current confusion of USB and Thunderbolt 3 connectivity due to using the same USB Type-C connector.

The benefits -- and some disadvantages -- of USB 4 are the same as those of Thunderbolt 3, including a throughput of up to 40Gbps, and may include elements such as power delivery of up to 100W, allowing notebooks to be charged over the same connection as the one sending a video signal to 4K and 5K displays. The spec will offer backwards compatibility with earlier USB standards, including USB 3.2 and USB 2.0, as well as Thunderbolt 3 itself.

The advantages of the protocol as a whole are constrained somewhat by cabling. The USB-C connector spans a wide variety of speeds and power requirements. There is not yet a labeling standard that the cable manufacturers must abide by, making cable selection by users somewhat problematic.

The implementation comes after Intel has offered the Thunderbolt 3 standard royalty-free to manufacturers with Tuesday's announcement, being the end-point of that.

"Releasing the Thunderbolt protocol specification is a significant milestone for making today's simplest and most versatile port available to everyone," said Jason Ziller, General Manager, Client Connectivity Division at Intel. "By collaborating with the USB Promoter Group, we're opening the doors for innovation across a wide range of devices and increasing compatibility to deliver better experiences to consumers."

While Apple is already an adopter of Thunderbolt 3, the change will help with the creation of more accessories that will work at the higher connection speeds and have support for the standard, in part due to it becoming more widely available. Indeed, Intel's integration of Thunderbolt 3 into future processors, including "Ice Lake" chips announced earlier this year, will help further that support.