Bob Iger: Disney and Apple likely to have merged if Steve Jobs was alive

AppleInsider
Posted: September 18, 2019 9:38PM
in General Discussion edited March 2020
Disney CEO Bob Iger in an upcoming memoir says he believes his relationship with late Apple co-founder Steve Jobs would have led to a merger between their companies, similar to Disney's assimilation of another Jobs company, Pixar. 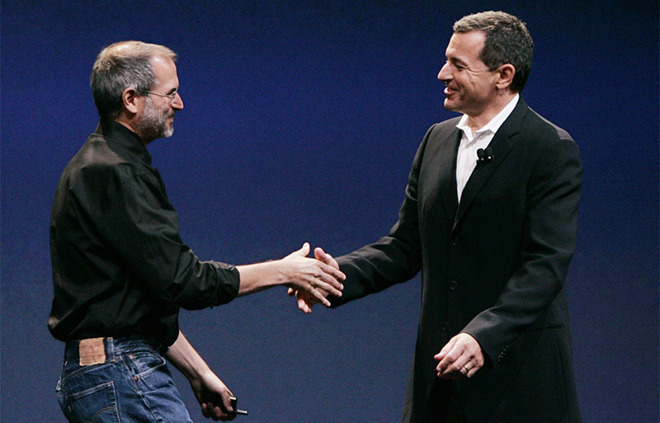 In an adapted excerpt from Iger's book, "The Ride of A Lifetime: Lessons Learned from 15 Years as CEO of the Walt Disney Company," printed in Vanity Fair, the Disney chief remembers his time with Steve Jobs. From patching up relations with Pixar soured by Michael Eisner to the $7.4 billion acquisition of the storied animation studio and beyond, Iger tells the behind-the-scenes story of Jobs' impact on Disney.

While much of the tale has been told in countless interviews, news stories and exposes, the excerpt presents a few tidbits that have, until now, gone unreported. Among the new information is Iger's belief that a Disney-Apple merger would be on the table if Jobs were still alive, a major revelation presented almost as a throwaway quote.

"With every success the company has had since Steve's death, there's always a moment in the midst of my excitement when I think, I wish Steve could be here for this. It's impossible not to have the conversation with him in my head that I wish I could be having in real life," Iger writes. "More than that, I believe that if Steve were still alive, we would have combined our companies, or at least discussed the possibility very seriously."

Iger goes on to detail his relationship with Jobs, which grew from tenuous beginnings prior to the Pixar buy to a strong personal bond that informed a number of key decisions in Disney's modern history.

The purchase of Pixar instantly catapulted Jobs from critical outsider to Disney's largest individual stakeholder. In that role, and as a board member, Jobs would be consulted on a variety of major resolutions, including Disney's tie-up with Marvel.

Iger last week stepped down from Apple's board of directors as the companies are due to clash with competing video streaming services this fall. Apple will field Apple TV+ on Nov. 1, while Disney is slated to debut Disney+ -- complete with a slew of Pixar content -- on Nov. 12.