AppleInsider
Posted: September 21, 2019 1:33PM
in General Discussion
Aftechmobile claims that with the design, implementation and use of the Shortcuts app, Apple infringes its patents regarding mobile application development software -- but it appears to be using a patent that was filed for and issued after Apple's first use of the technology. 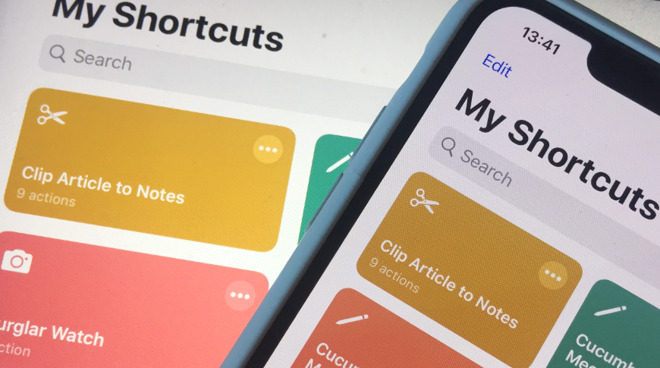 Aftechmobile has filed a lawsuit against Apple in the US District Court Northern District of California regarding the Shortcuts app. The suit asserts that Apple infringes Aftechmobile's patents regarding mobile application development software and the use of what it calls "pre-coded software components."

Referring to its US Patent No 10,133,558, dated November 2018 and known as the '558 Patent, Aftechmobile says Apple is infringing "at least one of the 28 claims" in that patent, by making and selling the Shortcuts app.

The suit repeatedly compares the '558 patent with Apple's own descriptions of the Shortcuts app.

"Apple describes inserting one or more of said pre-coded software components into said launched mobile application creation interface," it continues, "as 'to add an action to your shortcut, touch and hold an action in the list, then drag it to the position you want in the shortcut editor.'"

What Apple calls Actions in its Shortcuts app, Aftechmobile refers to as "pre-coded software components." Then similar assertions compare what the patent refers to as the "mobile application creation interface" with Apple's description of how users can "create a new, custom shortcut using the Shortcuts app."

Aftechmobile is seeking a trial by jury and an unspecified sum for "a fair and reasonable royalty." 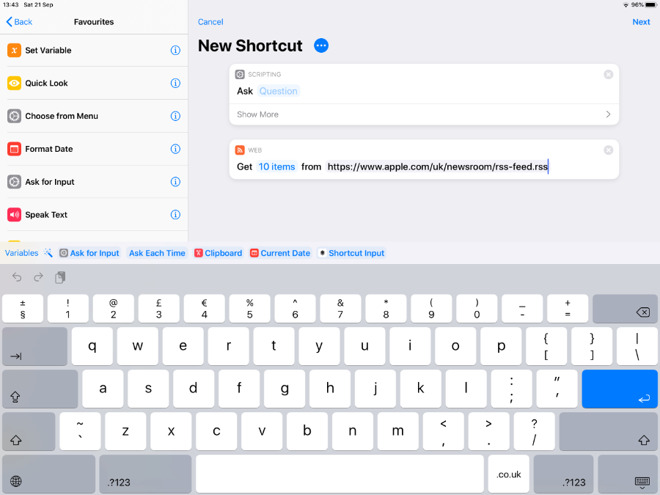 In Shortcuts, you drag actions from the list on the left, into the editor on the right. Aftechmobile calls these "pre-coded software components."

Apple has not publicly responded to the suit. The Shortcuts app is now shipping with iOS 13 and the forthcoming iPadOS 13, but was previously a separate, free product in the App Store. Prior to that, Apple's Shortcuts app was a third-party one called Workflow, which was first released in 2014.

Aftechmobile is a company based in Virginia. Its LinkedIn entry describes it as developing "innovative solutions to help our clients with Enterprise Mobile Strategy, Salesforce.com consulting... development of mobile Apps and more." The entry says the company has between 2 and 10 employees.

Currently Aftechmobile's official website either returns a 502 Bad Gateway error or, periodically, redirects to one called Mobrise.net which at time of writing went from being a registered, but non-existent site into one returning an error saying it is temporarily unavailable.

According to Crunchbase, Mobrise's founder and CEO is Arshad Farooqi. Aftechmobile's suit includes a copy of the '558 Patent which lists Farooqi as the applicant and inventor.

On the same day that Aftechmobile filed this patent infringement suit against Apple, it also filed a similar suit against Salesforce.com. Both cases are with the Northern District of California, and in both Aftechmobile is being represented by the same legal firm.