AppleInsider
Posted: October 1, 2019 11:01PM
in General Discussion
Apple CEO Tim Cook continued his annual European press tour this week with a visit to Berlin, where he met app developers, visited local Apple stores and discussed a range of pressing topics in an interview with a local journalist. 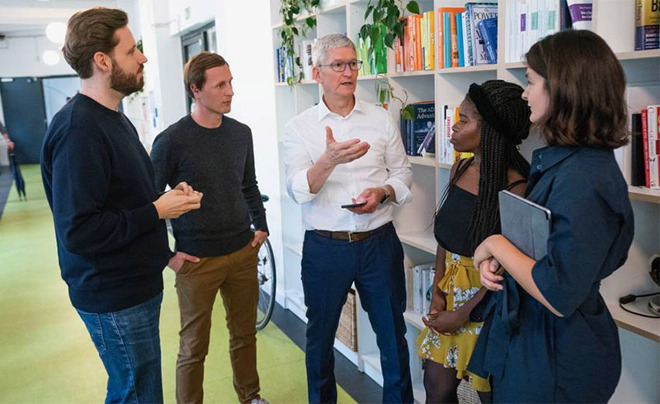 After rubbing elbows with Blinkist's founders and employees, who presented a history of their business and asked Cook for advice on potential app features, the Apple chief sat down with reporter Christoph Frhlich for a brief interview. An App Store monopoly lawsuit, iPhone 11 pricing and Apple TV+ were broached during the session.

On the App Store, Cook addressed allegations that Apple has created a monopoly with its curated app portal.

In May, the U.S. Supreme Court allowed an 8-year-old anti-competition case to move forward in lower court. Plaintiffs assert Apple's decision to restrict iOS device users to a single first-party store grants a monopoly through which the company can apply a mandatory 30% cut of most purchases, thus leading to artificially inflated prices. Complainants argue for access to third-party app stores or the ability directly purchase apps from developers.

Cook addressed the matter, saying, "No reasonable person would ever call Apple a monopolist." (Machine translation)

The quote appears to be a dig at Spotify, which in March did just that in response to Apple's official statement on an antitrust complaint the streaming service lodged with the European Commission.

But Apple's tight control of the App Store and the wider iOS ecosystem is an advantage, according to Cook.

"Customers buy an experience from us, and this experience includes a trustworthy place to buy apps in which we curate and check all applications," Cook told Stern, noting Apple filters out unseemly apps like those bearing pornographic material. "Anyone can take their iPhone and access that content in the browser, but we do not offer it ourselves."

Another bone of contention is Apple's increasing large App Store presence. With products like the iWork suite and a variety of free apps, the company is not only a software distributor, but for some a competitor.

"We have 30 to 40 apps, versus more than two million others," Cook said. He compares the App Store to a supermarket, saying, "The likelihood that it has its own brand is very high, and who benefits from having another product on the shelf? The customer. And that's a good thing."

The executive went on to discuss Apple TV+, Apple's first foray into subscription video streaming. Unlike most competitors, Apple TV+ will be available for a relatively low monthly fee of $4.99 when it goes live on Nov. 1. Further, customers who buy eligible hardware like iPhone and iPad get a year of service for free as part of limited time promotion.

When asked whether he believes the aggressive pricing has rattled industry stalwarts like Netflix, Cook demurs.

"I do not think the competition is afraid of us, the video segment works differently: it's not whether Netflix wins and we lose, or we win and they win," Cook said. "Many people use multiple services and we are now trying to become one of them."

Finally, Cook fielded a question about iPhone 11, which sells for $50 less than its iPhone XR predecessor.

"We always try to keep our prices as low as possible and fortunately we were able to lower the price of the iPhone this year," he said.

Over the past few days, Cook met with developers, visited Apple's Bavarian Design Center and stopped in at various Apple stores in Munich, Berlin and Paris, France. On Tuesday, he dropped in on a Today at Apple session at Apple Champs-lysees.

Cook's European tour has become something of a fall tradition over the past two years. In October 2017, the Apple head traveled to the UK and Sweden, while a 2018 trip included a stop in Spain.