AppleInsider
Posted: October 7, 2019 5:04PM
in General Discussion edited August 2020
The new macOS 10.15 Catalina has now been released by Apple. It brings security improvements, new features and the break up of iTunes into Music, Podcast and TV apps. 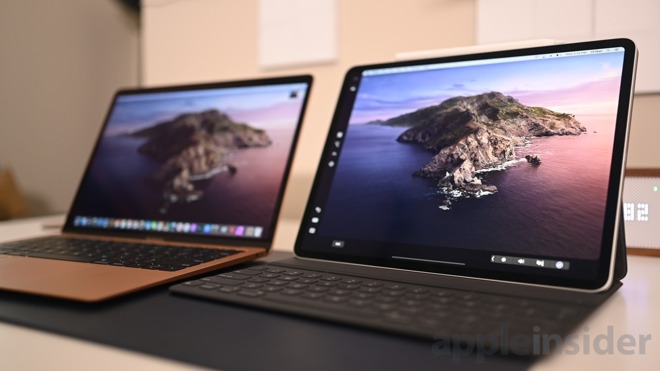 Following months of beta testing, Apple's new macOS Catalina has been publicly released. It is now the current macOS and will be installed as standard on all new Macs sold. Plus you will be prompted to upgrade to it by Software Update on your existing Mac -- if it's compatible.

The Mac mini and regular iMac will run macOS Catalina so long as they're from 2012 or later. Similarly, the MacBook Pro or MacBook Air have to be from then, while a MacBook has to date from 2015 or later. The 2013 Mac Pro is fine, as is the iMac Pro, and the forthcoming 2019 Mac Pro too.

You can read a complete list of compatible Macs on Apple's support site.

If you buy a Mac with it on, you will see the new Catalina wallpaper. And where with Mojave we used to have to pick between Dark and Light Mode, we now get a third option, called Auto. That will change between dark and light through the day.

Otherwise, you might be hard-pressed to visually tell the difference between it and its predecessor, macOS Mojave.

However, give it a couple of weeks and then trying going back to Mojave. Last year's macOS will feel dated and you will be surprised how many Mac features you then take for granted were introduced with Catalina.

Before you upgrade to Catalina, though, make sure all of your apps will work with it. Despite Apple having given developers years to move their apps to 64-bit as Catalina now requires, not all have done it.

There are even surprising holdouts like Strata, which makes a 64-bit version of its modelling app Design 3D CX8, but not a Mac one. They recommend you buy their Windows app, and presumably a Windows licence, plus either partition your drive for Boot Camp, or spend yet more money on Parallels.

We say stick with Mojave until Strata brings out a Mac version. Or until you've found an alternative, anyway.

Hold down the Option key as you click on the Apple menu. Then choose System Information... to get this pane

So before you move to Catalina, check what apps you have that won't work.

There is one app that you may well be very familiar with, and even reliant on, which won't be in macOS Catalina. The old iTunes app is gone, but it is replaced by three new ones which take up most of its functions.

The new Apple Music, Apple Podcasts and Apple TV apps break out the most common uses of iTunes into separate apps. The Music one is more geared towards the service Apple Music than iTunes was, but you can still store and buy music as you ever could.

Music also adds the new synced lyrics feature from iOS, meaning you can read a song's lyrics as they're being sung. 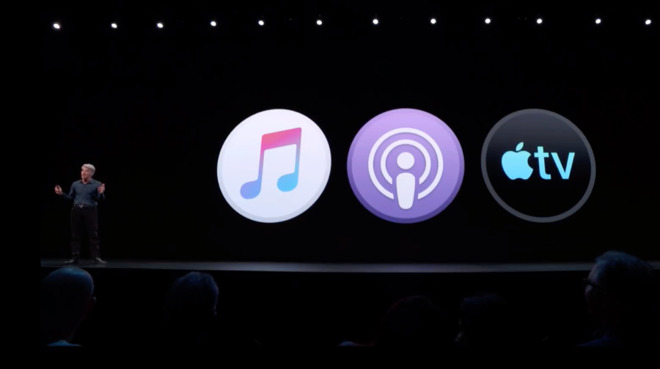 The old iTunes has gone, replaced by separate apps for Music, Podcasts and TV

Similarly, the new Apple TV app for Mac brings over everything video that you used to do in iTunes, from renting TV shows to buying movies. It's also going to be where you'll watch the forthcoming Apple TV+ and Apple TV Channels services.

The one function of iTunes that has not gone to a new app is the way you used to be able to use it to backup your iPhone. Instead, that's gone to the Finder. Plug in your iOS device and it will appear in the side bar just as any other external drive will.

Catalina was unveiled at WWDC in June, and then it was released as a beta, so that developers could make use of its new features in their own apps. The first such developer you're going to see exploiting Catalina is Apple itself, with its own apps.

That includes both long-existing apps and ones that first came to the Mac last year via project Catalyst.

Of the existing ones, Notes gets a particularly useful set of improvements. If you like using check boxes in a note, you can now have it so that a ticked box will automatically move to the bottom of your list, for instance.

Perhaps most significantly, Notes now lets you share entire folders with other people, instead of limiting you to a single note at a time.

If Notes has needed that functionality from the start, so has iCloud Drive. We've complained before about how you couldn't share folders in iCloud and about how for many people, that rules out using it to replace Dropbox. Now iCloud Drive can share folders at last.

Then search within Notes has been updated so that it auto-completes your search terms, and you can also find notes by switching to a new gallery view that shows them as thumbnails.

Speaking of thumbnails, Apple has also revamped Photos again. Chief among the improvements are how images in a Days view will now be displayed intelligently. Photos will automatically choose what appears to be the best shot when, for instance, you have a dozen or more similar images together.

All of the shots remain available, you just see this main one and can click through to see the rest.

Also, if you like Live Photos, you will especially enjoy how they now get displayed as moving images in this Days view. 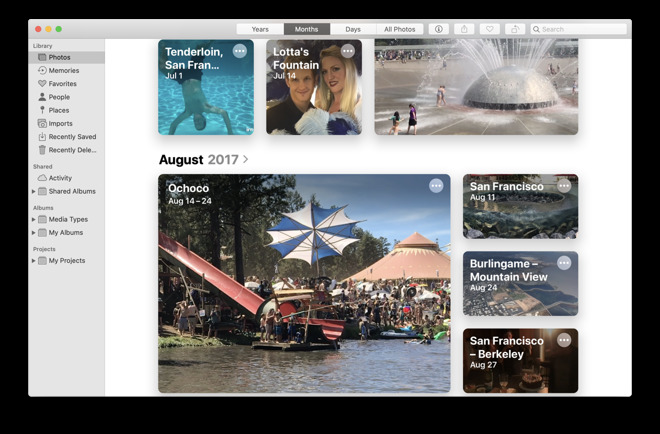 Reminders has also had a visual overhaul, but it's added some very welcome new features, too. Previously, Reminders was a very basic To Do app -- although it introduced the location reminders feature that every major competitor now uses -- and with Catalina, it takes a step up.

It's still not in the class of apps such as OmniFocus or Things 3, but it's added sub- or child tasks. Now you can collapse, say, a packing list into one single task called "Pack." You can group all of your September holiday jobs into one heading and only open it when you need. 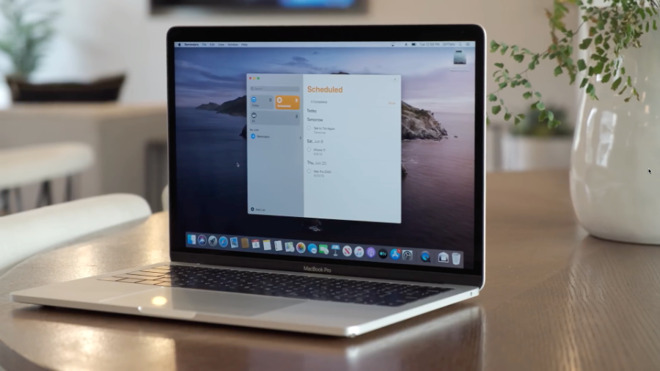 Reminders has new functionality but keeps its clean, minimalist look

Reminders is now much better at organizing items, and it lets you click to see ones that you've flagged, which are due today, and other criteria.

In comparison to Reminders, Safari has had only a few additions, but they are significant. It's now easy to move videos out of their tab, for instance, and into a separate, floating picture-in-picture window.

Possibly oddly, you start by looking for the address bar of tab that has an icon of a speaker. Where you could previously click to immediately mute the sound, or bring up a menu with some sound options, now you get Picture in Picture too.

While you're clicking in a tab's address bar, you can now start typing a website URL, and Safari will tell you if you've already got that open in another tab. It will then let you quickly skip to that tab, too.

There's now a similar option for every app on the Mac, including the Finder. Hover your mouse over the green button at the top left of any window and you'll get options to tile that window to the left or right of the screen.

There are two major new features in macOS Catalina which will either become your favorites or stay as a curiosity that you never use. One of them is Sidecar, which lets you extend your Mac's desktop onto an iPad. And the other is Screen Time, which can stop you extending the time you spend on social media. 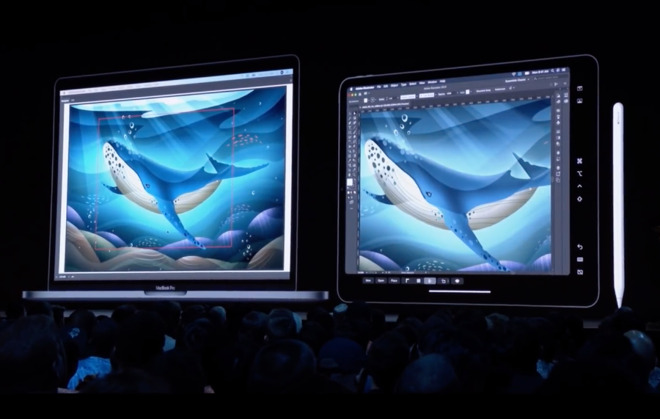 Sidecar being demonstrated at WWDC 2019

With Sidecar, Apple has Sherlocked tools by third-party developers and brought its own screen-extending technology to the Mac.

Now, if you have a compatible Mac and iPad, Sidecar lets use that iPad as a second screen for your computer, both connected by a cable, or wirelessly up to 10m, around a dozen yards, from each other.

If you have an iPad, Sidecar will let you, for instance, draw on it with Apple Pencil, or sign PDFs, and then have that appear on your Mac.

As promised by Tim Cook, Screen Time brings the iOS app's functionality to the Mac. It can limit what time of day you can use certain apps, and it can limit you to some specific number of minutes you can work with them.

We're calling these miscellaneous because they're dotted around macOS Catalina and they are quick to describe. In every other way, though, they are major improvements.

Such as how Catalina itself is installed on a separate, read-only partition on your Mac to prevent any malicious code being added to it.

Or how, speaking of security, you will now have to explicitly grant permission for more uses of your Mac than you used to. You'll now have to expressly say that TextExpander, for instance, can intercept your typing because you have to grant Input Monitoring permission.

And whenever you need to do something on your Mac that needs confirmation of your identity, such as when you're buying from the Mac App Store, you'll be able to authenticate yourself using your Apple Watch.

Catalina is a big change

If your Mac can run macOS Catalina, you should definitely upgrade to it -- but perhaps not immediately. You may not be able to instantly update anyway, as Apple's servers will be extremely busy in the first few days.

Take that time to make a backup of your current system, just in case. You should be doing this anyway, but do it again now as even though Apple makes it look easy, upgrading your entire operating system is a big job.