AppleInsider
Posted: October 14, 2019 12:54PM
in General Discussion
Enhanced Apple Maps have begun expanding out of Northeast and into the Midwest, bringing more details to Ohio, West Virginia, and parts of Michigan, Illinois, and Indiana. 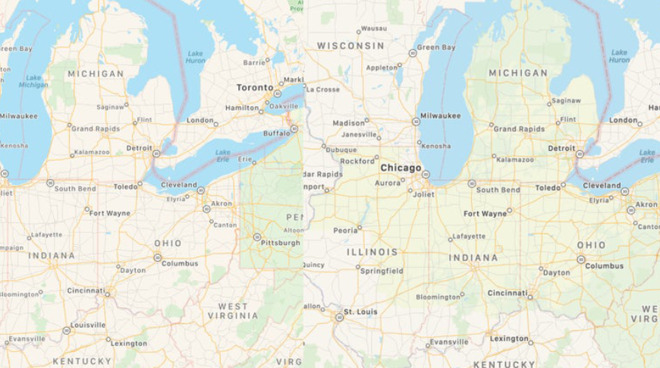 Apple has been expanding their revamped and enhanced Apple Maps in the northeast United States. Apple had recently updated its New York City maps, which included more transit information, better landmark detail, and Look Around.

On Sunday, Reddit user "999999797 "had posted they'd received the update on their MacBook, though the iPhone and iPad still showed older maps.

The updated maps cover Ohio, West Virginia, the lower peninsula of Michigan, and most of Illinois and Indiana. Updated areas will feature increased landscape detail, showing users the difference between parks and parking lots or parkways and pedestrian pathways, among others, according to MacRumors.

The updated maps detail is part of a relaunched Apple Maps which was released for iOS 13 and iPadOS 13. Apple continues to develop Apple Maps, with recent patents suggesting the company is investigating the use of virtual or augmented reality to aid navigation.