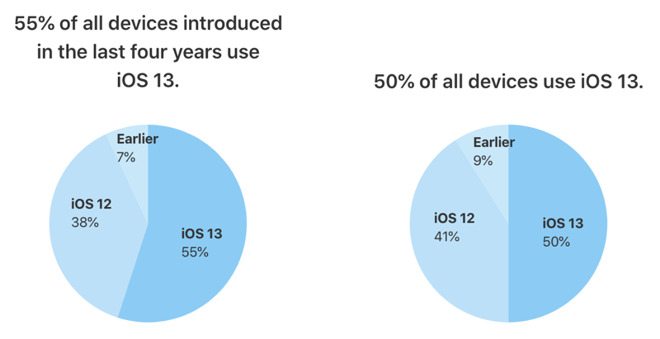 Statistics revealed in a post to an Apple developer support webpage also show iOS 13 adoption at 55% for devices released in the last four years.

Overall usage of Apple's last-generation iOS 12 is down to 41%, a figure that shrinks to 38% for recently introduced devices. Earlier versions of the mobile operating system occupy a 9% share of all compatible devices and 7% of hardware introduced over the past four years.

This year's iOS 13 launch is on a trajectory similar to that of iOS 12, which after a month of availability was running on 50% of all devices and 53% of devices released in the four years prior to 2018. Last year's iOS release enjoyed rapid adoption after initial release, with installs jumping to 70% in three months. By comparison, iOS 11 was installed on only 59% of devices over the same period. It should be noted that Apple now breaks out iPad statistics from iOS adoption rates.

Apple notes iPadOS is now running on 33% of all compatible iPads. The majority of iPads, some 51%, are still operating iOS 12, while another 16% are on older versions of iOS. Those figures see a slight bump for devices released in the last four years, with 41% running iPadOS, 51% on iOS 12 and 8% on earlier versions.

Introduced alongside iPhone 11 and 11 Pro in September, iOS 13 offers users an array of new features including Dark Mode, the "Sign in with Apple" single sign-in tool, revamped first-party apps, new camera features and much more.

Apple has since issued multiple point updates to patch bugs and security holes discovered after launch. The operating system is now up to version iOS 13.13, which saw release on Tuesday.
«12»