AppleInsider
Posted: October 28, 2019 6:47PM
in Mac Software edited February 2020
Aperture and iPhoto don't work in macOS 10.15 Catalina, and iTunes has been completely replaced. But, there is a solution with the Retroactive app. 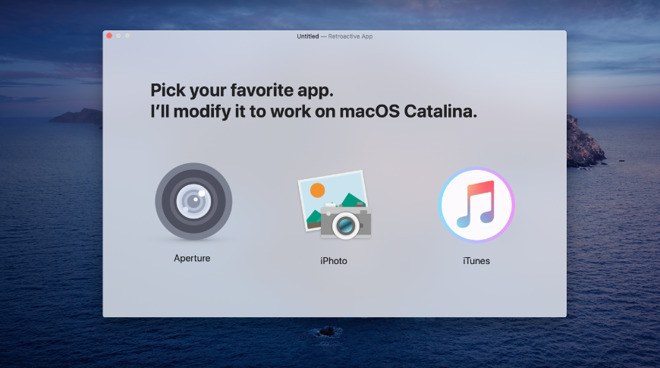 The release of macOS 10.15 Catalina brought with it a number of changes that affected how apps functioned, including tools Apple itself produced. Arguably the biggest casualty is iTunes, which was eliminated in favor of separate apps for Apple Music, Podcasts, and Apple TV, while the Finder handles iPhone and iPad backups.

In the case of Aperture, Apple's discontinued professional photography tool, it was effectively discontinued five years ago, but the app only stopped working in Catalina, while iPhoto provided a more consumer-friendly and simpler photo management system until it too failed to operate in Catalina. Apple intended for both apps to be replaced by Photos, but some users prefer to use the older tools instead of moving on.

The lack of support is in part due to Apple discontinuing support for 32-bit apps, with macOS now only functioning with 64-bit versions, forcing developers to update their software to 64-bit if they are to continue functioning normally. For users who needed to use specific apps or refused to migrate over to different tools, this forced some into the decision to stay on macOS 10.14 Mojave or earlier releases, and not to upgrade to Catalina.

However, in the case of Aperture and iPhoto, both apps are 64-bit with some internal 32-bit components, and the possibility of resurrecting the tools to extend their lives a bit longer.

A free tool from developer Tyshawn Cormier called Retroactive aims to fix the situation by allowing Aperture, iPhoto, and iTunes to run in macOS Catalina. Following a relatively short process, the app can be used to modify each piece of software to make it compatible with Catalina, with each conversion taking between 10 minutes to an hour to accomplish.

The tool itself is free and open source, hosted on Github, which also provides users with an opportunity to inspect the source code to ensure it is safe to use.

Rather than running the app within a sandbox or another in-depth solution, Retroactive goes through a number of small steps to modify the app itself so it can run, as the developer advises in a technical deep dive. 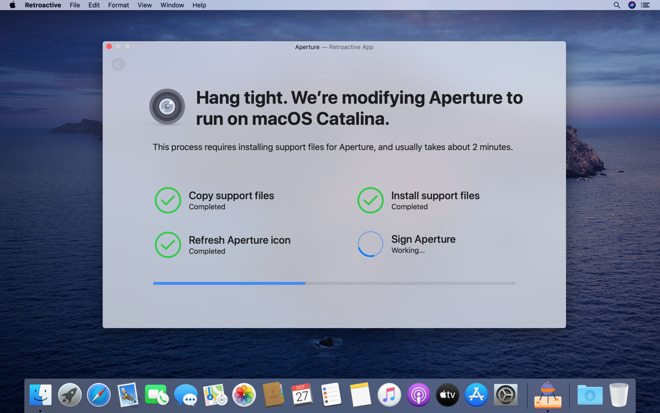 In the case of Aperture and iPhoto, Retroactive changes the bundle identifier for the app to something that isn't blocked by macOS' System Integrity Protection, add the NyxAudioAnalysis framework from macOS Mojave and update the framework path, then performs "Swizzling" on broken methods by replacing them with functional elements and filling in removed selectors. Retroactive then sets the constructed framework to load automatically before the application launches, then resigns the app with ad-hoc signing.

The result is an app that effectively runs almost completely as normal, albeit with some small issues relating to videos. Both Aperture and iPhoto cannot import or play videos, nor can they export slideshows.

A similar process is also available for iTunes, but with a difference, in that rather than relying on having an existing installation of the software to work from, it will download the selected version and install it for the user. Currently it offers iTunes 12.9.5 which supports Dark Mode and most DJ apps, iTunes 12.6.5 with support for downloading and archiving iOS apps, and iTunes 10.7 for CoverFlow.
«12»