Only use Apple's special cloth to clean Pro Display XDR

AppleInsider
Posted: December 10, 2019 11:24PM
in Current Mac Hardware edited July 2020
Engineered to exacting tolerances using only the best materials and cutting-edge processes, Apple's Pro Display XDR is a special piece of equipment. And to protect the $5,999 nano-texture version, Apple recommends using only the special cloth that comes in the box. 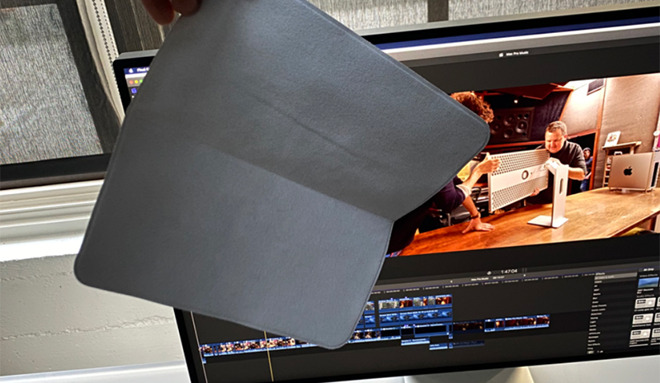 Apple on Tuesday issued a somewhat ominous warning in a support document detailing how to clean the new Pro Display XDR.

While a soft microfiber cloth and cleaning solution might be fine for conventional displays, Pro Display XDR owners are told to "use only the dry polishing cloth that comes with your display to wipe dust or smudges off the screen. Don't add water or use other liquids to clean the nano-texture glass."

A more pointed decree is included in a not-so-subtly highlighted box below the initial recommendation.

"Never use any other cloths to clean the nano-texture glass," Apple says.

Words like "never," "don't" and "prevent damage" bristle the neck hairs of even the most intrepid early adopters, especially those who just shelled out $6,000 for a 32-inch display.

What, exactly, sets Apple's polishing cloth apart from lesser linen is unknown, but the special accessory is apparently designed specifically for the nanometer level glass etching Apple calls "nano-texture." Introduced as a matte option for Pro Display XDR, the nano-texture version is not a coating but an etched layer designed to maintain image quality and reduce glare by precisely scattering incident light.

Apple notes that replacements are available if one should lose the cloth included with each Pro Display XDR purchase.

The non-nano-texture variant, which uses "standard glass," can be cleaned with Apple's polishing cloth or microfiber cloth.

Boasting a 32-inch 6K Retina Display with a resolution of 6,016-by-3,384 pixels, Pro Display XDR is packed with advanced technologies like a 2D backlighting system with 576 blue LEDs, custom lenses, a proprietary timing controller and power system capable of outputting 1000 nits of sustained brightness. Like other Apple screens, the XDR features a P3 color gamut and adds true 10-bit color depth.