AppleInsider
Posted: March 31, 2020 5:56PM
in General Discussion edited October 2022
Dark Sky, a popular weather app for iOS, Android, and the web, has been purchased by Apple. 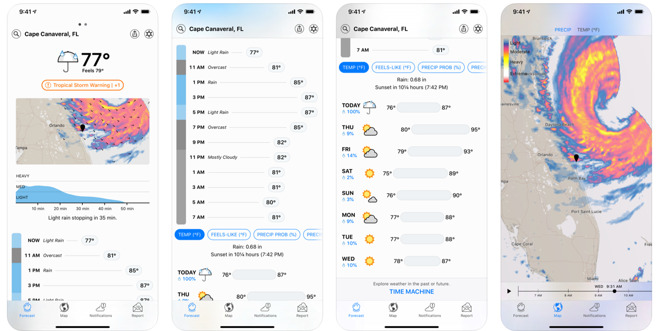 Screen captures from the existing iPhone version of Dark Sky

The announcement was made by Adam Grossman on Dark Sky's blog on Tuesday and reads,

Today we have some important and exciting news to share: Dark Sky has joined Apple.

Our goal has always been to provide the world with the best weather information possible, to help as many people as we can stay dry and safe, and to do so in a way that respects your privacy.

There is no better place to accomplish these goals than at Apple. We're thrilled to have the opportunity to reach far more people, with far more impact, than we ever could alone.

The post then goes on to discuss what will happen to the existing Dark Sky products. The iOS app will continue to be available for purchase in the App Store. The Android app, however, will shut down after July 1, 2020. Android subscribers who are still active will receive a refund.

The website will continue host weather forecasts, maps, and embeds until July 1, 2020. Afterward, it will remain active for API and iOS App customers only.

The API is no longer accepting new signups, but will continue to function for existing customers until the end of 2021.

The terms of the deal are not yet known. However, this may mean some changes to the Weather app are finally coming in a future release, likely during the iOS 14 cycle this fall.

In January of this year, Apple had obtained edge-based artificial intelligence startup Xnor.ai for $200 million. The move suggested the machine learning tools developed by the company may appear natively on iPhones and iPads in the future, with processing on-device instead of in the cloud.