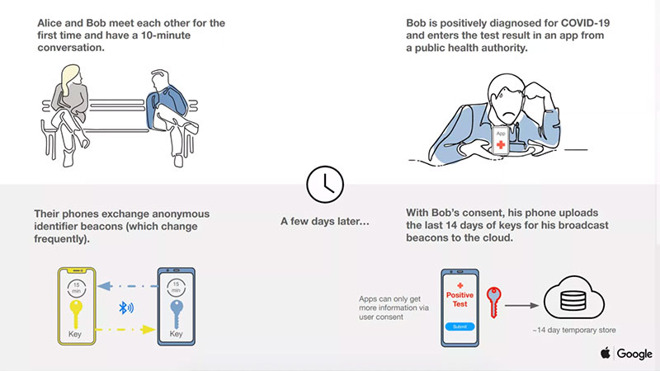 Starting in May, both companies will release APIs that enable interoperability between Android and iOS devices using apps from public health authorities to track the spread of COVID-19. These official apps will be available for users to download via their respective app stores.

Apple and Google will work over time to enable a broader Bluetooth-based contact tracing platform. Both companies will incorporate the functionality in Android and iOS as a whole, which allows more individuals to opt in, as well as enable interaction with a broader ecosystem of apps and government health authorities. Apple says that the deeper integration will arrive "in the coming months."

"All of us at Apple and Google believe there has never been a more important moment to work together to solve one of the world's most pressing problems," the joint statement said. "Through close cooperation and collaboration with developers, governments and public health providers, we hope to harness the power of technology to help countries around the world slow the spread of COVID-19 and accelerate the return of everyday life."

The pair have already released draft specifications of the underlying technology. Documentation available includes the Bluetooth specification that will be used to track the spread, the cryptography specification, and a framework API. Apple notes that the trio of documents are subject to modification and extension.

"Privacy, transparency, and consent are of utmost importance in this effort, and we look forward to building this functionality in consultation with interested stakeholders," Apple and Google have said. "We will openly publish information about our work for others to analyze."

The existing app without contact tracing is available for iPhone and iPad. The same information is available separately on Apple's COVID-19 website, which is also being regularly updated.
«123»