Apple Watch 'Series 6' could use smaller batteries than Series 5

AppleInsider
Posted: August 1, 2020 4:30PM
in Apple Watch
The Apple Watch Series 6 may have a comparable or shorter battery life compared to previous models, with regulatory filings indicating there could be three different sizes of battery used, with two out of the three smaller than the last generation and one larger. 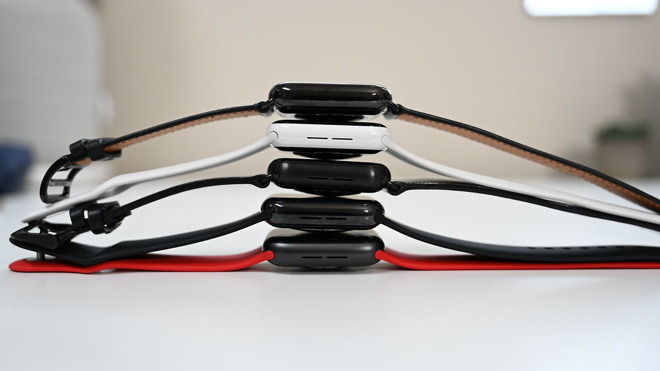 Apple's refinements with the Apple Watch series have led to wearable devices that are more power-efficient, extending their battery life as much as possible to get users though the day. Initial regulatory filings relating to the next model suggest Apple may be leaning on its power efficiency improvements.

Filings with 3D, Safety Korea, and UL Demco seen by MySmartPrice reveal a trio of batteries submitted by Apple for use in the Apple Watch Series 6. The filings, which includes photographs of the components, reveal three model numbers for the batteries: A2306, A2345, and A2327.

The differing capacities could be for a few reasons, such as for different sizes of models, or for versions with LTE over models without cellular connectivity.

Depending on Apple's power-saving gains for the next generation, there is a good chance that it may offer the same battery life as the Series 5 at least, though the larger capacity model stands a chance of offering more time between charges.

Other rumors circulating about the Apple Watch Series 6 has the device including a new plastic option, the possible use of microLED, and increased wireless performance.
«12»