AppleInsider
Posted: September 17, 2020 9:03PM
in General Discussion
Apple's new iOS 14 update appears to have a bug that wipes customized default browser and mail settings when a device is reset or restarted. 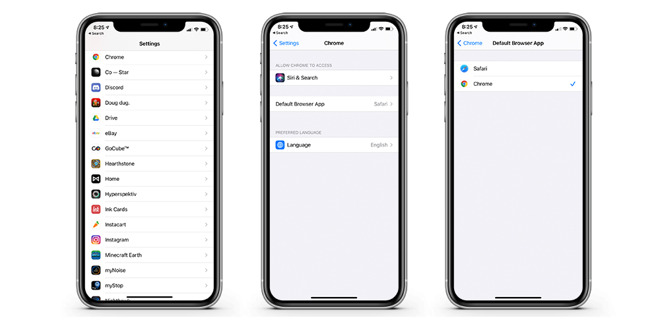 The iOS 14 update was released on Wednesday. One of its most noteworthy features is the ability to set third-party mail and browser apps as a default alternative to Apple's Mail and Safari.

A day after iOS 14 became available, users started to notice that restarts or resets were wiping their default browser and mail settings. For example, clicking a link after a restart will open that webpage in Safari, even if you set Google Chrome as the default.

It appears, at this point, that the only fix is to manually change the default app settings after a restart, or avoiding a reset in the first place.

The rollout of iOS 14 hasn't gone as smoothly as past releases, since Apple gave developers less than a day to prepare their apps for the update. It isn't clear what's causing the restart bug, however.

As of this writing, many popular browser and mail apps have added support for the default setting. That includes Microsoft Edge and Microsoft Outlook, Google Chrome, DuckDuckGo and the Basecamp-created Hey app.

Earlier on Thursday, Cisco warned users that a new privacy feature in iOS 14 and iPadOS 14 could interfere with mobile device management (MDM) and bring your own device (BYOD) platforms.
«12»