AppleInsider
Posted: September 23, 2020 5:55PM
in General Discussion edited September 2020
The "iPhone 12" will be announced at an Apple Event on October 13 according to prolific leaker Jon Prosser, aligning with earlier rumors. 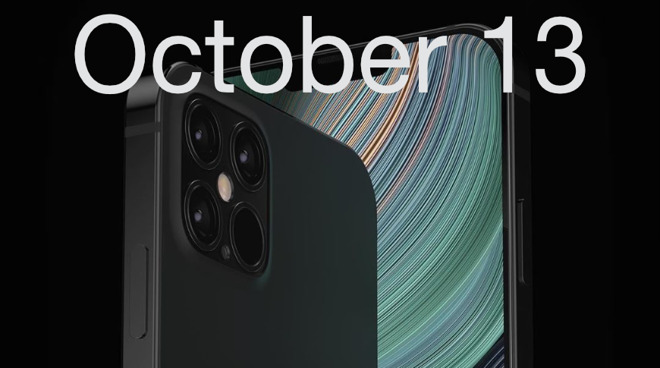 Apple is expected to announce the "iPhone 12" lineup at an event sometime in October, and all speculation points to October 13. Jon Prosser has added that his sources line up with the leaked date provided to AppleInsider.

Lines up with the dates I have you last month

I was told:
Event October 13
Pre-orders on 16
In stores on 23 https://t.co/9umqJqSzwq pic.twitter.com/fOt5eLzcBP

Prosser details again that the event will take place on October 13 with pre-orders opening on October 16, just as the AppleInsider source had said. He also included that the "iPhone 12 mini" and "iPhone 12 Max" would arrive in stores on October 23.

A follow up tweet noted that the "iPhone 12 Pro" and "iPhone 12 Pro Max" would likely be shown at the event, but not launch until sometime in November.

If accurate, the October 13 event will be the second fall event held by Apple in 2020. The "Time Flies" event was held in September and revealed the iPad Air 4, Apple Watch Series 6, and Apple One. After the October iPhone event, Apple is expected to hold one more event to reveal the first Macs with Apple Silicon.