To iPod on its 15th birthday: Thanks for revolutionizing digital music

AppleInsider
Posted: October 24, 2016 9:09PM
in iPod + iTunes + AppleTV edited October 2016
In 2001, Apple unveiled a singular product that launched the company out of the niche PC market and started an evolution that morphed the company into the world-dominating presence we know now. That device was iPod.

Since its debut 15 years ago, iPod's music player capabilities have been integrated into smartphones and other emerging technologies, making the once top-selling device an almost extinct product. Yet, it was the iPod that ushered in the age of digital music, an idea Apple cofounder Steve Jobs marketed as "1,000 songs in your pocket."

Although it's forever etched in our collective consciousness as the first stepping stone for portable music players, iPod was a leap into the unknown for Apple. At the time, iPod came with a hefty $399 price tag and Mac-only connectivity using the FireWire interface, bold strategies from a company looking to break into a new market.

At first, consumers didn't take to iPod, and tech reviewers panned the device. Sales outside early adopters and the Apple faithful were anemic -- but there were enough for the Apple that Jobs built to keep on.

Eventually, a market was born, helped along by the release of iTunes for Windows in 2003 and the iTunes Music Store.

If you're of a certain age, you'll remember the popularity of CDs and dodgy peer-to-peer music sharing sites. With the advent of iTunes, neither were required -- just pick some songs, load them onto your iPod and your favorite music was made ultraportable. It delivered an unparalleled end-to-end solution for music consumption.

Sales skyrocketed, setting the stage for 15 years of iPod evolution. We saw an iPod mini in 2004, the shuffle in 2005 and nano in 2005. With a diverse product line, Apple was able to offer the idea of iPod at almost any price point. 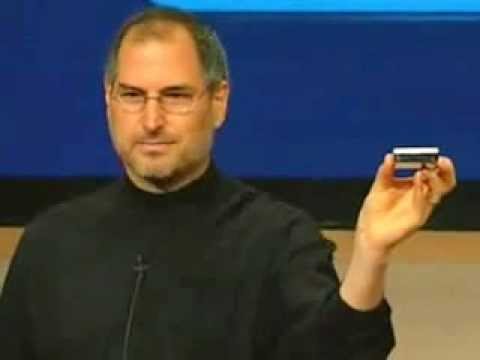 Now, the silhouette ads and white earbuds are an iconic part of pop culture, along with the device itself. Even the podcast -- named after the iPod itself -- can thank the iPod for its existence.

Apple unveiled iPhone in 2007, another revolutionary product that ushered in the beginning of the end for iPod. With iPhone, not only could you have thousands of songs in your pocket, but also a mobile phone, camera, PDA, web browser, video player and more.

The iPod touch borrowed some of iPhone's technology, including a large multitouch display, and launched later that year, throwing the device line a bit of life-line.

The iPhone brought with it the age of the smartphone, and within a few years the need for separate music players was effectively nullified. Sales went from 55 million iPods per year in 2008 to just a fraction of that in recent years. Apple no longer breaks out iPod shipments into its own earnings category, instead lumping the product in with other accessories and miscellaneous hardware.

Apple's revolutionary music player has since been relegated to niche buyers focused mainly on finding a low-cost device for working out. The current shuffle and nano models remain small, compact and fairly inexpensive. There were also third-party inventions -- like the LunaTik Watch Wrist Strap for the iPod Nano that was released in 2010 -- that showed signs for the need for the iPod, and Apple itself, to push into other markets.

The death of the iPod Classic in 2014 signaled an end to iPod innovation.

With the unveiling of the Apple Watch in 2015, even the iPod models in the wild face extinction as runners not only have streaming music offerings while they run or swim, but also a wealth of additional services and benefits from the watches and the fitness apps they house. That year also saw the debut of Apple Music, an all-you-can-eat streaming service that might prove to be the nail in iPod's coffin.

However, for die-hard fans and those attached to the classic wheel design, there are longevity programs thought up by enterprising third parties. One example is the iFlash, a DIY kit that allows users to replace the internal hard drive in the iPod Classic with an SDHC or SDXC flash media card -- giving up to a 128GB of capacity.

Although the iPod is reaching the end of its lifecycle, it's important to remember that it changed the way we listen to music. It was a revolutionary idea -- being able to carry in your pocket thousands of songs delivered direct through iTunes -- one that can easily be taken for granted.

So here's to you, iPod, on your 15th birthday! Thanks for revolutionizing the way we listen to music and helping us get rid of those clunky, awkward Walkmans.