AppleInsider
Posted: June 6, 2018 7:18PM
in iPhone
The newest commercial parody by Conan O'Brien shows an iPhone without buttons, a screen, or any functions at all -- the ultimate in device usage management.

In its keynote at WWDC Monday, Apple sought to address certain issues often raised about its products and their place in everyday life. A series of new features announced for iOS 12 included Screen Time, individual app limits, and Do Not Disturb During Bedtime.

Tim Cook, in a subsequent interview, even admitted that he spends more time on his devices than he should.

Conan, the TBS talk show hosted by Conan O'Brien, had some fun with these initiatives, debuting a TV commercial parody on Tuesday for the "iPhone Basic" -- an iPhone that solves the too-much-screen-time problem by not having a screen at all, or buttons, or any other functionality of any kind. "The iPhone Basic: We Release You" is the tagline for the fictitious device. 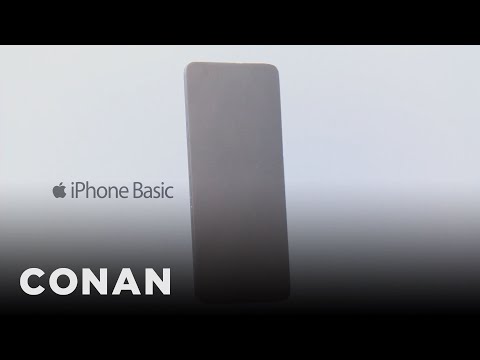 While the parody isn't quite perfect, it comes across as an expensive-looking, extremely well-produced approximation of Apple's style.

Unless it's all stock footage, the "commercial" was produced uncommonly quickly, as the Apple announcement came Monday morning and the bit aired on the show Tuesday night. There's a chance the bit was produced ahead of time to coincide with WWDC without specifically knowing about the Screen Time part in advance.

O'Brien's show has frequently indulged in Apple-related humor. Conan ran an Apple Health parody ad last year, with a 2011 bit mocking Apple at the time of the iPad 2 launch. The show even made light of the Apple/Samsung patent dispute in a 2012 video bit.