Comparing the Core i9 and graphical performance of the 2018 15-inch MacBook Pro with Dell'...

AppleInsider
Posted: August 9, 2018 3:11PM
in Current Mac Hardware edited August 2018
The 15-inch MacBook Pro's Core i9 processor is fast, but how does it stand up against another notebook packing the same chip? AppleInsider pits the new high-specification MacBook Pro against the Dell XPS 15 to see how Apple's latest release stacks up to the competition. 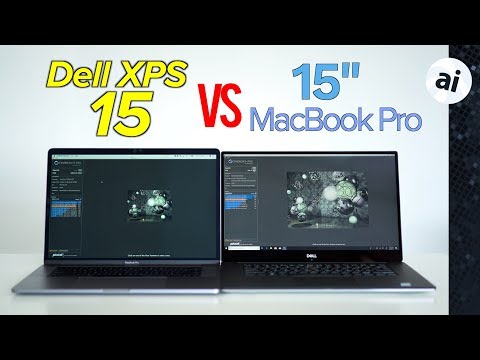 In this test, we are used a 15-inch MacBook Pro and a Dell XPS 15 notebook. Both are upgraded as far as they can go, except for the SSDs, with the Dell notably costing a fraction of the MacBook Pro's price.

Both notebooks have the same model of Core i9 processor, the version that was seen in previous tests to have heavy thermal throttling issues in the MacBook Pro.

Out of the box, the XPS 15 will not run at full performance, with users needing to change battery settings to enable maximum power. Without doing this, the Dell would achieve some pretty low scores.

Starting with Geekbench 4, the MacBook Pro appeared to score way higher in the multi-core test, despite scoring lower in single-core, for the same exact chip. This result seemed a bit odd, but then we discovered that the Core i9 in the XPS 15 won't run at full power unless you plug in the charger.

On the retest, both machines were connected to their power adaptors, which allowed the XPS to run at a performance comparable to the MacBook Pro. Again, the same power settings had to be adjusted on the XPS as under battery power.

Unsurprisingly, there is no change at all to the results on the MacBook Pro, regardless of whether it's plugged in or not.

The Cinebench R15 stress test runs the benchmark four times in quick succession, without any breaks between tests. Depending on thermals and other elements, the results seen at the start of the run may be different from what's seen at the end.

Starting with the XPS 15 running on a power adapter, we noticed the wattage hit a peak of 77 Watts, before dropping down to an average of 55 Watts. After the four runs completed, the average score was 1,107 points, which is quite high.

Repeating the test under battery power, the processor only hit a maximum of 46 Watts, far lower than the 77 Watts we saw while charging. The points average of 962 was also a reduction from the on-charge test, suggesting the battery isn't able to provide the power the Core i9 needs.

This pretty much confirms that the 15-inch MacBook Pro's i9 processor performs better than the Dell XPS 15's i9 on battery power.

While battery power can affect the processor performance, it is also worth investigating whether the same can be said for the graphical capabilities of the two notebooks.

Under Geekbench 4's graphics test, the Dell's 1050 TI graphics greatly outperformed the MacBook Pros 560X while on charge. Under just battery power, the Dell's score went down by a pretty significant 10,000 points, but it still remained ahead of the MacBook Pro.

On to Cinebench R15's graphics test and, with the chargers plugged in, the XPS scores much higher than the MacBook Pro. Switching to battery power, the MacBook Pro dropped a couple of points, presumably within a margin for error, but the Dell XPS dropped a pretty big 13 frames per second.

As an extra test, we tried to find out the speed of the included SSDs. Capacity isn't being examined in this case, just speed, and the MacBook Pro showed its storage is much faster than the version in the XPS.

Based off these results, the XPS loses enough processor performance while on battery power that it's actually slower than the MacBook Pro, despite having the exact same processor. The battery is just not able to provide enough power to keep up.

The Dell also loses graphics performance while on battery, but it's still way faster than the MacBook Pro's graphics despite the power reduction.

Outside of the figures, the biggest commendation should go to the MacBook Pro's battery. While the Dell seemingly doesn't offer enough to keep things running smoothly while away from the outlet, the MacBook Pro works as if it's still connected.

AppleInsider will be performing more tests of the capabilities of the two notebooks, including examining their thermals, fan noise, video and photo editing performance, and their overall usability.

How to save on your purchase

Those interested in the 15-inch MacBook Pro can save $100 on every 2018 model at Adorama with promo code APINSIDER. To activate the deal, you must use this shopping link or the pricing links in our MacBook Pro Price Guide prior to entering the code. Along with the exclusive discount, the Apple authorized reseller will not collect sales tax on orders shipped outside New York and New Jersey, and no interest financing is available when paid in full within 12 months when you sign up for the Adorama Credit Card.

For help redeeming the coupon code, please see the step-by-step instructions found in this guide.