AppleInsider
Posted: October 25, 2018 8:00PM
in iPad
Crews working for Apple are in the process of decorating the Howard Gilman Opera House in New York City for the company's Oct. 30 press event, where it's expected to reveal new iPad Pros and possibly other products such as updated Macs.

The decorations include an Apple logo out front, and colorful window coverings reminiscent of the graphics in Apple's media inviations. Similar imagery is being used for brick arches on one side of the building, Macotakara noted. 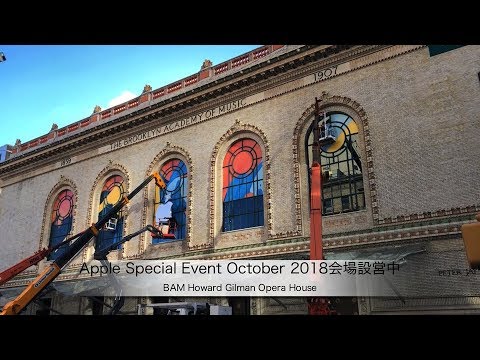 Redesigned iPad Pros should take after the iPhone XS and XR, swapping a home button and Touch ID for gestures and Face ID. Accordingly they should have much smaller bezels, but will likely retain 10.5- and 12.9-inch displays. Some signs have pointed to Apple replacing Lightning with USB-C.

New Macs could include three desktops and one basic MacBook. The desktop lineup may involve updated iMacs and/or an overhauled Mac mini, the latter long overdue, given that Apple hasn't refreshed the Mini since October 2014.

Some possible but less likely announcements could include an updated iPad mini and a lower-cost HomePod. Apple has often been speculated as ending the Mini line, since the latest model -- the Mini 4 -- came out in September 2015.