AppleInsider
Posted: March 28, 2019 5:04PM
in iPhone edited May 2019
Apple is continuing its "Privacy. That's iPhone" marketing campaign by publishing a new video to its YouTube channel, highlighting the anti-tracking measures of Safari to prevent advertisers from knowing what users are searching for online. 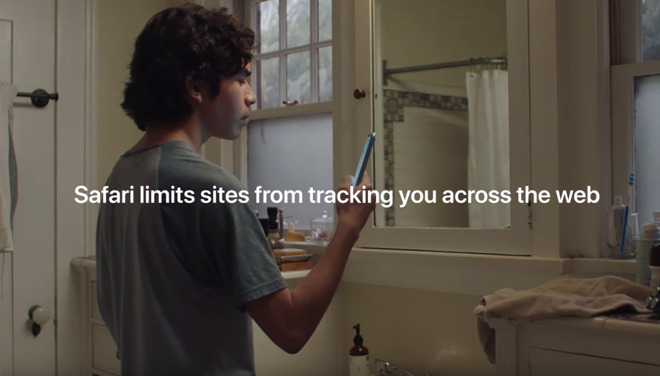 The latest ad, titled "The Answer," focuses on one teenager in a bathroom looking at his mustache into a mirror. Browsing on an iPhone XR, his internal monolog muses "All these websites say it's normal to start shaving at age 15," suggesting the kind of thing that internet users may not want to share with others.

The teenager then places the iPhone XR down on a towel in a cut-away shot, to the background sound of an electric trimmer.

On-screen text in the ad states "Safari limits sites from tracking you across the web. Because what you browse should be your business. Privacy. That's iPhone." The last section of the ad spot is the Apple logo with a padlock loop closing and snapping shut.

Below the video, the description includes a link to the Apple Privacy minisite, which goes into detail about Apple's position on privacy and security, and how its ecosystem is built with those policies in mind.

The video carries on from one released on March 14, which jabs at steps people take in day-to-day life to protect their privacy.