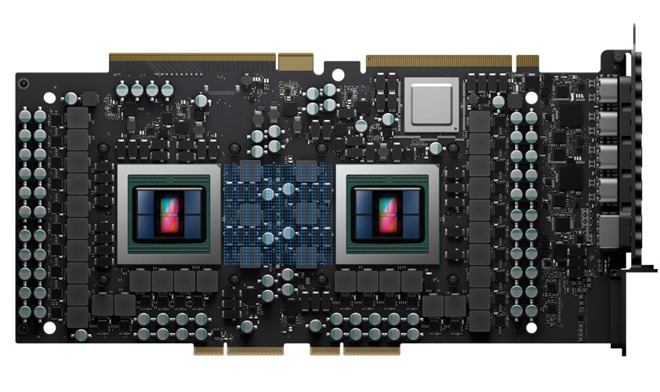 As revealed on Monday, the Radeon Pro Vega II is produced using a 7-nanometer manufacturing process, the same as its other 2019 GPU launches like the Radeon 7. To further its performance, the Pro Vega II is paired with 32 gigabytes of high-bandwidth memory (HBM2), a faster and more efficient memory than the more typical GDDR5 delivering 1 terabyte per second of memory bandwidth.

AMD uses a GPU interconnect technology called Infinity Fabric Link to connect the GPU with other components at extremely high speeds, at up to 84 gigabytes per second per direction, five times faster than PCI3 Gen 3. This all helps enable the GPU's 14 teraflops of single-precision floating-point (FP32) performance, rising to 28 teraflops for half-precision floating-point (FP16) performance.

According to AMD's specifications, the GPU offers 64 compute units, 4,096 stream processors, has a 4,096-bit memory interface, and a peak engine clock of 1.7GHz. It is also optimized to support Metal, Apple's graphics architecture, to enable "seamless content creation."

As the name suggests, the Radeon Pro Vega II Duo takes full advantage of the Infinity Fabric Link to put two GPUs right next to each other. In effect, this doubles the compute units and stream processors to 128 and 8,192 respectively, allows up to 64GB of HBM2 memory to be used, and FP32 performance of up to 28.3 teraflops.

Pricing for the Radeon Pro Vega II and Duo version have yet to be announced, but they are almost certainly going to be offered alongside the Mac Pro at its release this fall.