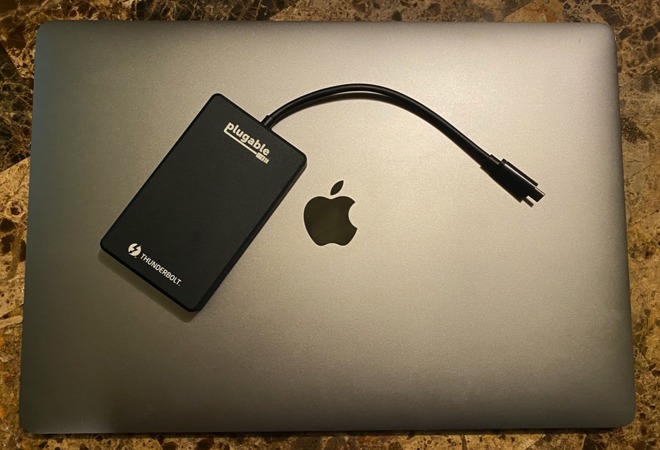 What the Plugable Thunderbolt 3 NVMe External SSD is

Coming in at 6.1 ounces the Plugable Thunderbolt 3 NVMe External SSD about the weight of a hockey puck, with a surface area only slightly larger than a smartphone. Its aluminum body acts as both a heat sink and as protection from accidental bumps and drops. And, it comes with a plush velvet carrying case to keep the drive enclosure safe from scratches and damage while in transit -- but the cable sticks out the end, unless you really want to jam it in the bag, which we don't recommend.

The drive is pre-formatted with exFAT right out of the box, making it compatible with any Thunderbolt 3 enabled Mac or Windows system. Note that this does not mean USB 3.2 type C -- while there are drives that have a step-down Thunderbolt 3 controller allowing for this, the Plugable Thunderbolt 3 NVMe External SSD is not one of them.

Plugable says that the drive is designed for creatives who need fast scratch storage and regularly conduct large file transfers. High-resolution artwork, 4K video, or high-definition photos can be quickly transferred to and from the drive, freeing up space and backing up projects when needed. For instance. the one terabyte model is capable of storing 155 minutes of ProRes 422 HQ 4K video or 175 minutes of DnXHR HQ 4K video, with speedy retrieval.

The enclosure is designed to prevent casual removal of the media inside, which is a good thing. To Disk Utility, it identifies as PCI-E storage. Plugable is properly identified as the vendor in the macOS System Report.

We've been testing the 2TB version of the Plugable Thunderbolt 3 NVMe External SSD for a while now.

When we write reviews, we generally save opinions for after the opening description of what the product does, but we're going to say this right now -- we're not fond of permanently attached cabling on drives. While we're sure Plugable will deal with this in the case of breakage, a socketed Thunderbolt 3 connection has always made more sense to us from a user flexibility perspective. 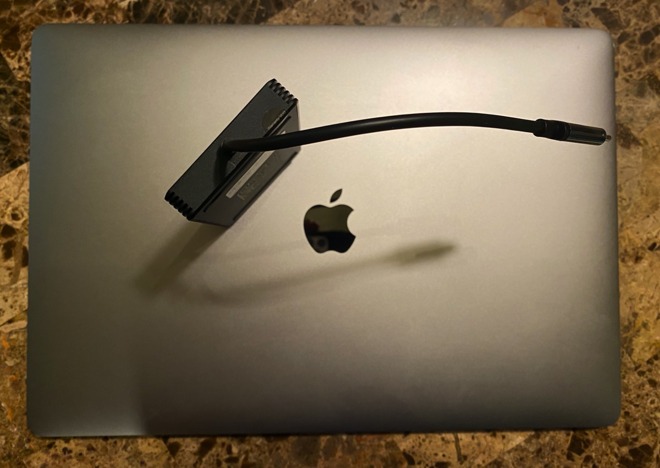 Speed is effectively the same in HFS, APFS, or exFAT.

We've had some opportunities for long travel on our nation's railways as of late, and we know that the Wi-Fi can't be relied on. So, we've been putting content on the drive, instead of crossing our fingers and hoping we have cloud connectivity.

Without the Plugable Thunderbolt 3 NVMe External SSD connected, our regular workflow accessing the internet when possible, watching some locally-stored video, and similar work delivers about seven and a half hours of battery life without the drive plugged in and no AC power supply, on the aforementioned MacBook Pro with some battery wear from age and use.

With the drive plugged in, and stress-testing the drive with the BlackMagic Design Disk Speed Test utility, we got about seven and a quarter hours with effectively the same work flow. We're not comfortable saying that there is no meaningful drain when constantly slamming the drive when on-the-go, but we can say that the impact is small.

And, if you've got $500 for a 2TB SSD, you've probably got enough money for a USB-C battery for your MacBook Pro, or a travel AC adapter for those times you're on the move with the drive to offset the power the drive takes.

During that extended testing, heat was never an issue. A non-contact infrared thermometer reported temperatures at the enclosure's surface of 25C after 15 minutes of constant writing and reading in a 20C office and train, with it hitting 31C after two hours and maintaining that temperature. This is in comparison to the 39C that the upper row of keys in our i9 MacBook Pro can hit under load for extended periods of time.

Very close to ideal, but...

Thunderbolt 3 takes some adjusting, but once you've done so you'll wonder what you did without it. But, drives that fully leverage the interface speed aren't cheap, and the Plugable Thunderbolt 3 NVMe External SSD is no exception.

While not nearly as fast, a user can build 1TB of SATA-3 based external USB 3.2 type C storage at about a quarter of the speed for around $125, with 2TB available for around $260. NVMe storage in USB 3.2 type C enclosures will be a bit faster, and a bit more expensive, but still limited to the 10 gigabits per second that the protocol allows.

How much that speed is worth, is left as an exercise for the reader, as is how much the non-removable cable detracts from that value. What we like both the Plugable Thunderbolt 3 NVMe External SSD models for beyond portability, is to use them external to a Mac mini for a macOS boot volume.

In late October of 2019, you can get a 2018 i7 Mac Mini configuration from Apple for $1099 with 128 GB of storage. Jacking that up to 1TB, adds $600 to the configuration's cost. At full retail pricing, the 1TB Plugable drive is $299, with the 2TB sitting at $499. Both run at equivalent speed to Apple's 1TB storage option and are way faster than the 128GB in that $1099 configuration -- which you'd get to keep if you went this route. The procedure to boot from an external drive on a T2-equipped Mac like the 2018 Mac mini is straightforward, and we detailed it earlier in 2019.

Of course, using an external drive for a boot volume is only safe if the Mac mini itself is securely located and the drive can't easily be purloined by somebody who wants your data.

In short, we like the Plugable Thunderbolt 3 NVMe External SSD for a few different use cases. We like it a lot, overall. We just don't like that permanently mounted cable, but your mileage may vary.

This is an ideal drive for an owner of a Mac with Thunderbolt 3 that demands the fastest speed possible from an external storage volume. If it weren't for that cable, we'd give it a 4.5 out of 5.

The one terabyte Plugable drive costs $299, while the two terabyte version costs $499. Each comes with a three-year warranty. Launch discounts are available for $50 or $100 off retail for the one and two terabyte models respectively on Amazon for a short period of time.