AppleInsider
Posted: January 21, 2020 12:27PM
in General Discussion edited August 2020
Apple is researching a version of Touch ID would use sensors behind an OLED screen rather than via a specific button -- and Apple includes a laptop in its examples of touchscreen devices. 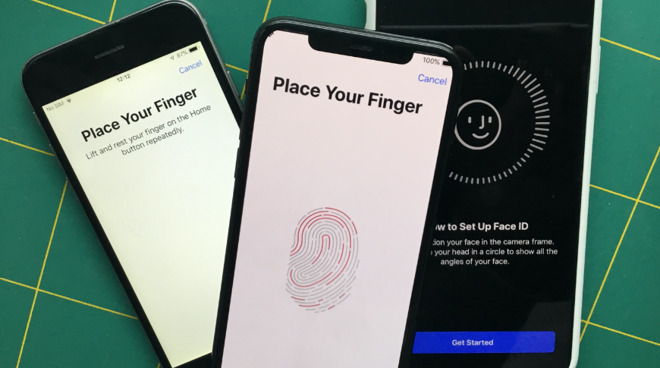 A new patent from Apple details how devices with an OLED screen can provide Touch ID-like functionality across any point of the display's "active area." Among the examples of the method's application, Apple describes a laptop -- and this follows the recent hint of a touchscreen MacBook Pro in another recent patent.

"Touch screens, in particular, are becoming increasingly popular because of their ease and versatility of operation as well as their declining price," it continues. "Touch screens can include a touch sensor and a display device positioned partially or fully behind the touch sensor so that the touch-sensitive surface can cover at least a portion of the active area of the display device."

While listing other technologies that can be used for touchscreens, such as LCDs, the patent says that OLED has clear advantages.

"OLEDs, for example, can provide a flat or flexible display in a relatively thin package that can be suitable for use in a variety of portable electronic devices," it says. "In addition, OLED displays can display brighter and more vibrant images in a thinner and lighter package compared to LCD displays, making them suitable for use in compact portable electronic devices."

The drawings accompanying the patent include one showing a laptop with a touchscreen, although the accompanying text instead describes a "personal computer... (e.g., a tablet computer or desktop computer)." 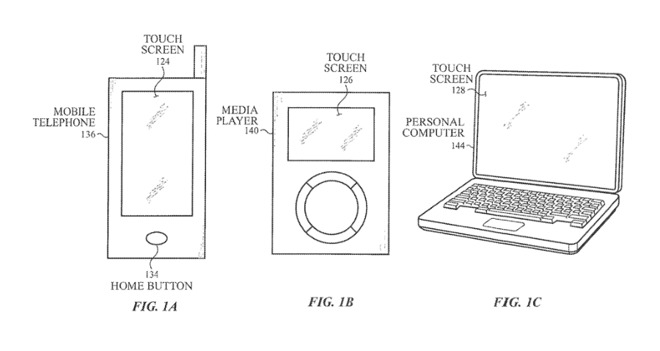 Detail from the patent showing a laptop with a touchscreen

With any type of device, the patent describes how the user or other objects can be identified "based on its optical properties."

"Based on the frequency of the reflected light or spectral 'fingerprint' detected by the plurality of OLEDs, a processor or controller can determine the type of object," it continues.

The "plurality" of OLEDs is to do with how one or more than display an image, emit light for this optical touch sensing, and even detect reflections of that emitted light.

"[An] approximate touch location can be determined by capacitive touch sensors, and one or more finer details can be resolved by optical touch sensors. The touch screen can include a spatial filter configured to focus light emitted from the OLEDs and/or reflected light detected by the OLEDs for improved optical touch sensing. Emitted light can reflect off an object (e.g., a finger) touching or hovering proximate to the touch screen, for example."

So as well as identifying the user, such a system could interpret a hovering action as well.

The two credited inventors, Christoph H. Krah and Kingsuk Brahma, have between them around 80 patents. Very many of them are concerned with touch displays, including systems for proximity and multi-touch sensor detection, plus power management for touch controllers.

This is not the first time that Apple has filed a patent regarding a whole-display Touch ID. A previous application included the use of acoustic imaging to achieve identification.

Analyst Ming-Chi Kuo has also reported claims that Apple will reinstate "fingerprint on display" Touch ID for iPhones in 2021.