Rosenblatt throws in the towel on AAPL coverage

AppleInsider
Posted: January 29, 2020 2:42PM
in AAPL Investors edited January 2020
The most bearish Apple analyst on the Street is parting ways with Rosenblatt Securities, and as a result the firm said it will be ceasing its coverage of the iPhone maker. 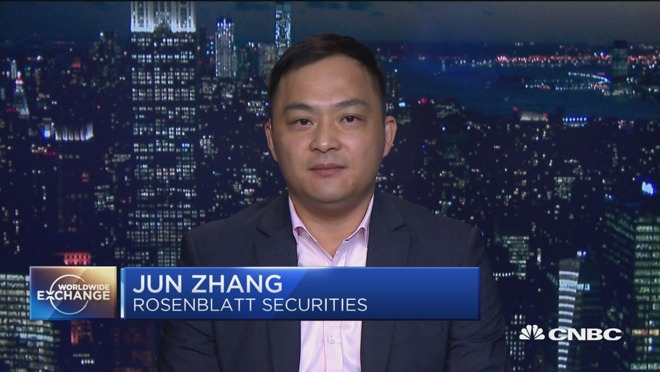 In a note seen by AppleInsider Rosenblatt has terminated coverage of Apple because Jun Zhang is no longer with the firm. Zhang's predictions for Apple stock pricing have trailed reality -- sometimes by more than $100 -- for about four years.

In April 2016, Zhang said that if the iPhone 7 didn't have a "panel upgrade," there would be no other feature upgrade possible to drive demand. But, the note acknowledged "camera upgrades, speaker upgrades, a home-button upgrade, and some software upgrades" were probable for the device.

As early as May 2017, Zhang predicted that what was ultimately became the iPhone X was suffering from Touch ID supply problems -- a feature not on the iPhone X -- and wouldn't ship until the first quarter of 2018.

Later, in 2017 and 2018, Zhang didn't appreciate Apple's growing Services business at all, and didn't see it as a material addition to the company's revenues going forward.

Following the release of the iPhone 11 lineup in September 2019, Zhang continued to not see the buffering effect on earnings that Apple services provides to offset the impact of a staggered iPhone launch. At the time, he was solely concerned about iPhone sales sustainability, and the difficult compare of the timing of the launch from the previous year.

Furthermore, he said that "we do not believe AirPod shipments will grow in a meaningful way." In actuality, Apple has seen significant imbalances in demand to availability of the AirPods Pro since launch, and Apple CEO Tim Cook says that this will continue for the foreseeable future.

"With the earlier launch of new iPhone models and the upcoming production of the iPhone SE2, we do not think slight [year-over-year] growth from iPhone revenues will bring much excitement," said Zhang at the time.

Zhang's last Apple note on January 24 raised the Apple target price to $250. At the time, Apple stock was trading at $320 per share.

Apple is not the only company that the firm is no longer covering, with Qualcomm, Synaptics, and Viavi Solutions all on the chopping block as well. At this time, it isn't clear why Zhang left Rosenblatt.