AppleInsider
Posted: August 23, 2020 11:54AM
in General Discussion
Apple has started to test its update for Apple Maps that brings more detailed information to the navigation app, with a small number of users spotting the new map data being used in the United Kingdom and Ireland. 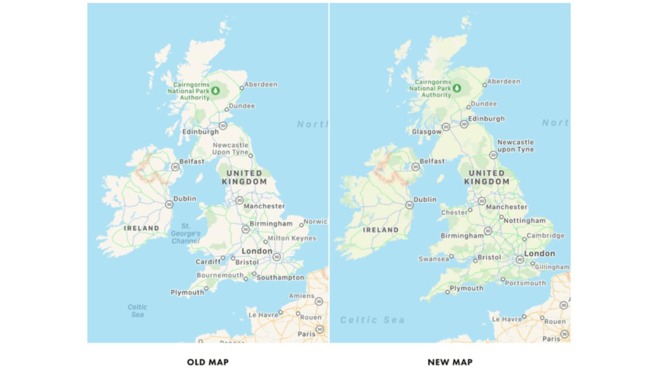 Apple Maps update for the UK and Ireland [via Justin O'Beirne]

During WWDC 2020, Apple announced it would be bringing its improved Apple Maps to more countries, expanding on its existing work in the United States. Its first international expansion, as part of iOS 14, will cover the United Kingdom, Ireland, and Canada, and would occur sometime later in 2020.

According to Justin O'Beirne, who has been keeping track of the update's rollout in different areas, there have been some sightings of the refreshed map for the UK. Testing was spotted on August 22, but it seems to only be visible to a very small number of users, with polling pointing to only 3% of Apple devices having access.

Apple initially visited the UK and Ireland in June 2015 with its mapping vehicles, with the last subregions of each country traversed by May 2019.

Analysis of Apple's previous testing of Maps expansions reveals it takes between 16 days and 49 days performing public testing ahead of a general release. Given the relatively small size of the UK and Ireland compared to other expanded areas, it seems plausible that the testing cycle will be on the quicker end of the spectrum, though the range would also coincide with an anticipated public release of iOS 14.

There is no sign of similar testing covering an update to Canada's maps at the time of publication, but it is likely to occur soon if Apple is to meet its late-2020 deadline.

Along with more detailed maps outside the US, the Apple Maps update will also include enhanced cycling directions, improvements to recommendations for where to visit or eat, and EV routing.