AppleInsider
Posted: December 12, 2020 9:11PM
in Apple Watch edited December 2020
The Apple Watch will soon be able to detect atrial fibrillation via the ECG function at higher heart rates than at present, potentially allowing for someone who was working out to use the app without relaxing beforehand. 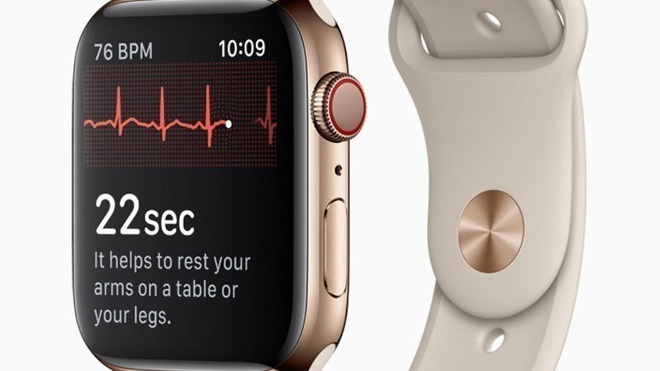 Introduced with the Apple Watch Series 4, the ECG app can record the electrical signals generated by a person's body during a heartbeat, using two points of contact. While the app has been repeatedly credited with helping to detect heart problems, like AFib, the current version of the app relies on the user having a more manageable pulse in order to perform the reading.

The existing version offers an "inconclusive" reading for attempts to record a heart rate below 50BPM or over 120BPM, which means it can't be as effectively used by those on certain medications that slow the heart, or are an elite athlete who can naturally acquire a low heart rate through training. It also means that those who have an elevated heart rate following exercise or gain it through various factors, such as stress, nervousness, or alcohol, cannot use the feature.

According to MyHealthApple, Apple applied to the FDA for an update to its ECG app in August, and was granted approval for its changes. These alterations, which may appear in the watchOS 7.2 update anticipated to ship in the coming week, includes expanding the range it can perform an ECG reading to a maximum of 150BPM.

For those who do have an AFib reading with a heart rate between 100 and 150bpm, there will be a new classification that denotes it as a reading with the high rate.

Screenshots from watchOS 7.2 were posted to Twitter by Steve Moser, who warns the feature may not be available in all locations. Given the FDA approval, as well as a change in algorithm spotted on Wednesday, it seems highly likely it will be available to US-based users, though further approvals may be required in other territories, such as Taiwan.