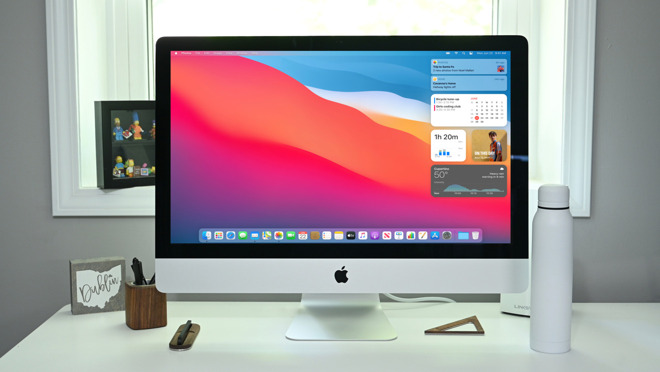 The redesigned iMac is said to be reminiscent of the Pro Display XDR, with all around slimmer bezels and no metal chin, sources told Bloomberg. The redesign, the company's first since 2012, is also said to see the iMac move away from a curved back to a flatter rear section.

Sources said that the iMac update will be Apple's biggest visual redesign in 2021. There are reportedly two versions of the iMac in development, codenamed J456 and J457, that will replace the current 21.5-inch iMac and 27-inch iMac devices.

Both will use a new generation of first-party Apple Silicon processors that will also appear in the 2021 MacBook Pro lineup. Apple's first piece of Mac silicon, the M1, debuted in 2020.

Rumors in 2020 suggested that the company was working on a new iMac design with "iPad Pro design language" and "Pro Display like bezels." An iOS 14 icon ostensibly representing a refreshed iMac was also discovered in 2020.

Apple released new iMac models in 2020, but those kept the same years-old design of the 2012 lineup.

Along with the iMac, Apple is also working on a pair of new Mac Pro models. The first would appear identical to the current version that launched in 2019 and may continue to use Intel processors. The second variant, equipped with an Apple Silicon chip, could be about half the size and feature a design that "could invoke nostalgia for the Power Mac G4 Cube," Bloomberg reported.

The company is also said to be working on a lower-priced external monitor as part of its new Mac desktop efforts. No other information on the monitor is available other than the fact that it'll be much cheaper than the $4,999 Pro Display XDR.
«1234»