AppleInsider
Posted: June 30, 2017 6:02PM
in Current Mac Hardware edited July 2017
Apple's 5K iMacs have been extremely popular, especially with content creators, and this year's hardware refresh packs in even more bang for the buck. If you're trying to decide between buying the latest model, or a discounted late 2015, AppleInsider offers a closer look at how they compare. 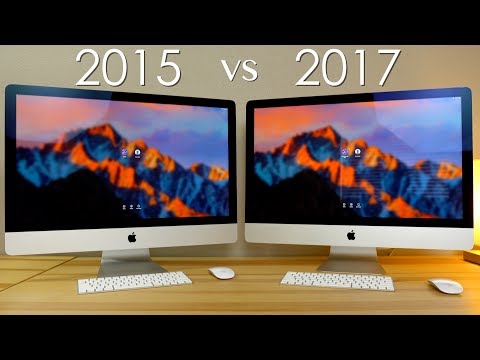 Externally, the 2017 iMac is basically identical to the 2015 version apart from the replacement of two Thunderbolt 2 ports, which have shifted to Thunderbolt 3 with USB-C connectors. Thunderbolt 3 is a huge step up from Thunderbolt 2, as it's not only twice as fast at up to 40Gb/s, but can adapt to almost anything including a single 5K or two UHD 4K displays.

The 2015 iMac can technically support an external 5K display, but it has to be a dual DisplayPort model that will take up both of your Thunderbolt 2 ports and limit output to 8-bit color.

Apple boasts a 43 percent increase in display brightness, but unless your Mac is in a very bright room or you're battling glare, you won't need the extra nits. In my well lit office, we ran the 2015 model one to two bars shy of max brightness, compared to four to five with the 2017 model.

Inside, the 5K Retina iMac now provides Intel's 7th Generation Kaby Lake quad core processors. Based on published specs, the i7 model receives a 200MHz base clock speed increase and 300MHz boosting clock allowing it to run from 4.2GHz to 4.5GHz as opposed to 4.0 to 4.2GHz with the 2015 Sky Lake i7-equipped iMac.

That only tells part of the story, though, heavy CPU usage like video transcoding would inhibit the 2015 iMac from boosting. The new Kaby Lake i7 processor is capable of handling that load while supporting Turbo boosts up to 200MHz. The architecture upgrade not only offers improvements to power efficiency, but also a faster overall clock speed under full load.

Power increases usually come hand in hand with additional heat and the new iMac is no different. Under extended 100 percent CPU load the 2017 5K iMac starts to slow down to stay cool. For some reason the fan maxes out at 2,700RPM, which is 150RPM slower than last year. The slower speed along with a different sound profile does make it quieter and less annoying under load, but we would prefer a louder, cooler running iMac. This is an even bigger bummer when you realize that the CPU could run at 4.5GHz if the CPU stayed cool enough.

Even with it's faster fan, the previous iMac runs hotter with the CPU dropping 200MHz under its rated base clock of 4.0GHz under extended full load, whereas the new Kaby lake equipped iMac at least manages to stay at its base clock speed.

Thankfully, unless you transcode 4K video like we do, most programs (including photo and video editing) don't consistently max out your CPU, so this should be a non-issue. We edited multiple 4K videos for our YouTube channel and the computer never got hot enough to slow down, but it did get loud.

This year also delivered a major graphics update featuring the latest energy efficient AMD Polaris chips. Notably, the GPUs are desktop grade instead of the usual laptop chips Apple threw into previous iMacs. This results with the base model Radeon Pro 570 with 4GB of memory being faster than even the M395X, which was the best graphics chip available in the 2015 model.

Many people complained about a "stuttery" user interface with the previous model's base or mid-level GPUs, and that was likely because of the measly 2GB of video RAM they offered. The iMac's 5K display eats up almost 2GB of video RAM by itself, which doesn't leave much for software that supports graphics acceleration. Anyone that was serious about creative work had to spend extra to get the M395X with 4GB of RAM.

Both our test machines include the best graphics cards offered -- an 8GB Radeon Pro 580 for the 2017 iMac and 4GB M395X for the late-2015 model. Both Mac's have 32GB of RAM, with the Kaby Lake Mac's being faster DDR 2400MHz compared to DDR4 1866MHz. The 2017 model officially supports 64GB of RAM, whereas the 2015 only offered up to 32GB. Aftermarket parts makers found the machine worked just fine with 64GB, but the option was never offered by Apple.

Let's start getting into some benchmarks, starting with the the PCI SSD which received a performance boost with the redesign. Speed increases are impressive, especially write performance which went from 1,217MB/s all the way to 2,126MB/s and read speeds improved from 1,981MB/s to 2,718MB/s. In fact, the new PCI-SSD's are so fast that they maxed our preferred disk speed test from Blackmagic so we ended using AJA System test.

Cinebench R15, a 3D rendering benchmark, didn't see much gains with the CPU score increasing from a respectable 861 in the late 2015 iMac to 930 with the Kaby Lake 5K model. Running Cinebench's OpenCL graphics test, the Radeon Pro 580 unsurprisingly took the lead at an average of 129.6 frames per second compared to the 106FPS the 4GB M395X managed to pull off.

Unigine Heaven, a gaming benchmark showed 52 percent faster graphics performance with the 580, giving us a score of 1,041 compared to 685 with the M395X. What was even more interesting is how much cooler and quieter the 2017 iMac ran. Even after three consecutive tests, the Radeon Pro 580 didn't go above 77 degrees Celsius with fans spinning at audible, but quiet, speeds of around 1,700RPM. The last-generation iMac ran at a shockingly hot 92 degrees Celsius with fans running between 2,400 and 2,500RPM. You can get that temp lower to a more comfortable 85 degrees if you manually set the temps to 100 percent, which in turn sounds like leaving a hair dryer on in your room. This really goes to show how much more efficient the new Polaris 14nm design is compared to 28nm Tonga architecture of the M395X.

Running Windows 10, we tested Battlefield 1 and Doom at 2,560-by-1,440 pixel resolution, which is the best option for the 5K display's 2x scaling as it minimizes aliasing. Using the ultra graphics preset in Battlefield 1, the Radeon Pro 580 ran between 50 to 70 frames per second averaging 63FPS where the M395X averaged 35 and ran between 30 to 40FPS.

The results were similar with Doom at ultra settings where our 2017 iMac averaged 55FPS and the 2015 averaged 31FPS. The new iMac has no problems playing these AAA games and is perfectly smooth, even when frame rates slightly drop during intense scenes. The M395X, on the other hand, goes from not very smooth to a laggy mess during explosions or scenes with a lot of action. Gaming with the 2015 iMac requires dropping detail levels from ultra to medium to get a smooth experience. On top of that, we once again experienced noticeably higher fan noise with the older Mac.

If you're using 2015 iMac, or for that matter any Mac or PC with insufficient CPU or graphics hardware, check out our video on Nvidia's Geforce Now cloud gaming service that offloads all the processing to their servers.

Moving on to productivity, the 2017 iMac was 75 percent faster in the Final Cut X benchmark Bruce X, taking only 15.5 seconds to complete the render compared to 27 seconds with last year's model. As a reference point, our late 2013 Mac Pro equipped with a 6-core Xeon processor and dual 6GB D700's (best graphics offered) takes 24 seconds to render. The Mac Pro just got a major price drop but still costs $3,799.99, and that's without a keyboard, mouse, or a gorgeous 5K display. I guess what I'm trying to say is 2017 5K iMac screams when asked to do OpenCL accelerated tasks.

Taking this analysis further with real-world video editing using Final Cut, our 2017 iMac was between 45 and 80 percent faster than the 2015, depending on the task. Stabilizing a 20-second 4K clip takes only 8 seconds compared to 14.5 on the 2015 iMac, which is definitely not slow. This really shows how well Final Cut X takes advantage of the hardware, as Adobe's Premiere Pro takes longer than four minutes to do the same task.

Rendering and exporting a 5 minute 4K clip with color correction and effects applied took 4 minutes and 29 seconds compared to 6 minutes and 23 seconds on the older iMac. Just looking at the time may not seem like a significant difference, but these speed increases apply to the hours upon hours that we edit video which makes a big difference in day-to-day work. We saw similar improvements with a 4K multi-cam project with heavy effects, and an even greater speed bump editing 1080p video.

Unfortunately, these impressive improvements don't translate to Premiere Pro editors, where we saw between 11 to 15 percent speed increases running the same tests. It's obvious that the hardware is capable, but Premiere Pro is much less efficient and doesn't make use of the extra graphics power.

For photographers, we edited 28 megapixel RAW images using the latest version of Adobe Lightroom. During the editing process, there was no noticeable speed improvements while applying changes to the RAW files. We did count a slightly faster rendering and converting time when we processed 50 edited RAW images to JPEG, with the 2017 iMac taking 1 min and 37 seconds compared to 1 min and 48 seconds for the older model. Unless you're editing thousands of images each work day, however, the slight disparity is insignificant.

So what's the verdict? Well if you're planning to edit video with Final Cut X, render using OpenCL or spend time gaming, the 2017 i7 Kaby Lake iMac with the 8GB Radeon Pro 580 provides a massive performance improvement over the previous iMac. It's definitely worth buying the new model over a used or refurbished one, and if you own a 2015 and make a living with Final Cut, it's worth selling and upgrading since Macs hold their value so well.

If you're a photographer or edit video with Premiere Pro, it's really not worth upgrading. With that said, if you're comparing both models, the 2017 is still a better value since it now sells for $300 less in the best configuration with 32GB of RAM and a 512GB SSD (see how to save an additional $75 with exclusive coupon code APINSIDER, plus no tax collect on orders outside NY and NJ, at Adorama).

If you're working with Adobe programs and don't game, you can save some money and go for the mid tier i7 with 4GB 575 graphics since these programs don't make use of the better GPU, but are more CPU limited. This configuration will outperform the best available options in 2015 with a $400 lower price tag. On top of that you get the benefits and future proofing of Thunderbolt 3, with a brighter display and lower fan noise.

Multiple new 2017 27-inch iMac 5K models are shipping now from Apple authorized resellers with instant discounts and tax incentives. Adorama is knocking an additional $75 off already reduced pricing on every 2017 27-inch iMac 5K with exclusive coupon code APINSIDER using the pricing links in our 27-inch iMac 5K Price Guide. B&H is also offering customers cash discounts, and both retailers will not collect sales tax on orders shipped outside NY and NJ (providing many customers outside those two states with an additional $140 to $425 in savings). The configurations shown below are in stock and ready to ship at press time, while a full list of configure-to-order (CTO) systems can be found in our Price Guide.