AppleInsider
Posted: September 25, 2017 4:58PM
in macOS edited September 2017
High Sierra has arrived for all users, and brings the Apple File System to the Mac for the first time, while introducing support for a variety of other standards such as HEVC video, HEIF image encoding, and Apple's Metal 2 graphics platform supporting technology like external GPUs.

macOS 10.13 High Sierra is now available as a free download from the Mac App Store. Here's what you can expect to find once you install it.

The Gold Master candidate was build number 17a362a. The full release is 17a365, indicating some changes have been made since the last beta release earlier in the month. 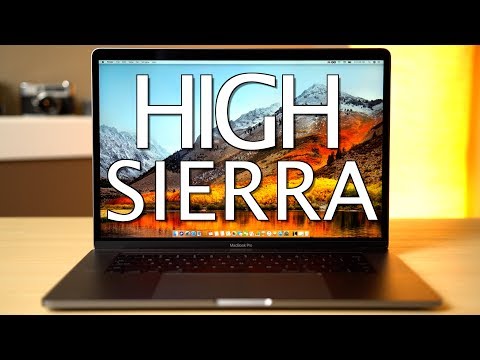 In general, Apple's browser is now faster and consumes less power than previous versions. Specifically, Apple claims that the new version of Safari is 80 percent better performance on modern JavaScript.

Safari has drawn the ire of the advertising industry. Six ad industry organizations complain that Safari's Intelligent Tracking Prevention will not only hurt them, but the public as well -- but Apple disagrees.

Photos has a new view, including a chronological display, and new filtration mechanisms. Metadata, including image categorization performed by machine learning routines, are automatically synchronized across devices.

New editing tools have been added, including selective color modification, curve changes, and all edits synchronized from Photoshop or Pixelmator back to the photo library.

Apple File System, or APFS, was designed with all of Apple's platforms in mind, scaling from watchOS to iOS and tvOS to macOS, and taking advantage of the fact that most of the company's products are now using Flash or SSD storage. It also was built with encryption and the security it provides to users as a primary underpinning of the technology.

After a difficult beta process, with the feature not supported on "some" drives, APFS will not be initially supported on Fusion Drives such as those commonly found in the iMac. It is unclear precisely when it will be implemented.

Citing the wider adoption of 4K and HDR videography, Apple has added support to macOS for H.265 and HEVC. All High Sierra-compatible machines will support the codec, some in software, and some in hardware.

Metal 2 includes driver optimizations, and apple claims that it brings up to a 10 times better draw call throughput. More debugging tools are now available, and the Mac Window Server has been migrated to Metal as well to enhance performance of the system-wide animations.

Metal 2 will ultimately bring the ability to use Thunderbolt 3 external enclosures for high performance video cards officially in macOS. However, the feature will only be added to the operating system at some point in the spring of 2018.

Regarding hardware, Apple has not put any more limits on High Sierra than already existed on Sierra. However, High Sierra is the last version of macOS to support 32-bit apps "without compromises."

In conjunction with announcing High Sierra over the summer, Apple has declared that in January 2018, all new apps submitted to the Mac App Store are required to be 64-bit. The noose tightens a bit in the summer of 2018, with all app updates needing to comply with the mandate.
«12345»