Video: Putting the iMac Pro thermals to the test

AppleInsider
Posted: December 29, 2017 11:02PM
in Current Mac Hardware edited January 2020
Apple's new iMac Pro now uses a much more advanced dual fan cooling solution, with almost 75 percent more airflow and an 80 percent increase in system thermal capacity. AppleInsider put it to the test to see how it performs with CPU and GPU intensive tasks, and we came away with interesting results. 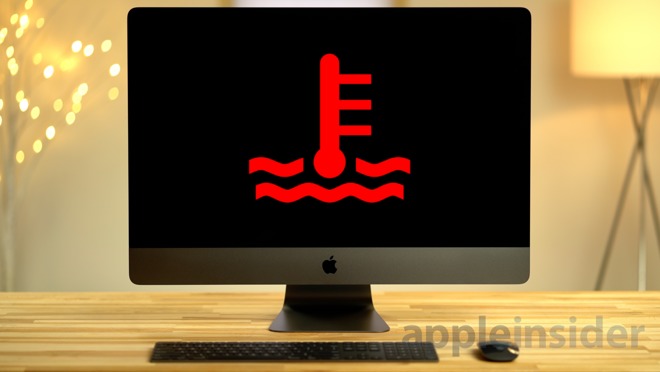 The first thing we should mention is just how quiet the iMac Pro is. Apart from the fans kicking up momentarily when we cold boot into macOS, the fans are virtually silent even when doing 4K video editing. When we ran the same tests on our regular iMac, the fan was running at full blast. 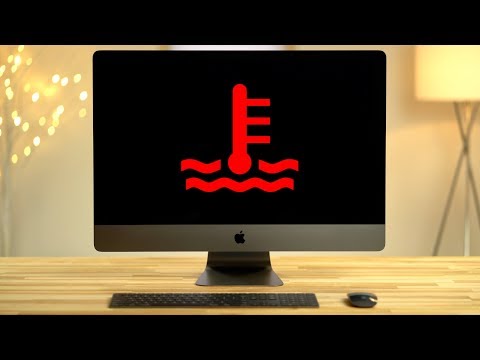 We started off our tests using Cinebench R15, where our iMac Pro received an impressive multi-core score of 1682 -- 80 percent faster than the fastest regular iMac. During the first few consecutive runs of the CPU benchmark, our clock speed stayed at the maximum 3.9GHz.

After the second test, each additional run would cause the iMac Pro to slow down the CPU when the temperature reached roughly 94C, which caused the clock speed to drop from 3.9ghz to about 3.6ghz for a second or two. This allowed the CPU to drop below 92C, and the clock speed to rise back to the maximum turbo boost of 3.9GHz.

Interestingly, even after 10 consecutive benchmarks, the iMac Pro fans were barely audible. Instead of ramping up the fan speed to keep the CPU at its maximum turbo boost speed, the iMac Pro just kept the cycle going, with the clock speed dipping every 10 seconds or so while staying very quiet.

The next thermal test we ran was transcoding 4K HEVC video to Apple ProRES, which consistently maxes out the CPU. After first 30 seconds, the CPU reached 75 degrees celsius and the clock speed stayed at the maximum 3.9GHz. An additional 30 seconds brought the temps up to 85C. Three minutes into the test, we saw our first short dip in maximum clock speeds, with the Mac dropping to 3.63GHz for just over a second once the temps reached 93C, and then right back up to 3.9GHz.

We recorded the same behavior for the next 7 minutes in the test, with dips to 3.63GHz when the processor hits 94C, and overall CPU temperatures ranging between 90C to 94C.

Unfortunately, none of the many fan speed applications we tested appear to be measuring correct fan speeds, and none of manual fan controls are working at present. So, we're just not sure how fast the fans were running during those tests. We could speculate they are just above idle, since they were very quiet.

Just like with most previous Macs, Apple chooses to run their machines as quiet as possible, even if it means running the components very hot and having to slow them down. We expect these applications will be updated to support the iMac Pro, allowing you to set the fans to ramp up earlier and run faster.

The last test we did was running the same HEVC transcoding test, which completely maxes out the processor, and at the same time running Unigine heaven, which will run the graphics card at 100 percent as as well. The iMac Pro uses a single cooling solution for both chipsets, so this should put a lot more stress on cooling system.

This was the first time we heard the fan speeds get loud and reach what we think is the maximum speed, with the noise level being similar to that of the 2017 5K iMac but with a deeper tone.

After 30 seconds, the iMac Pro's Xeon hit 94C, reaching the maximum temp allowed by the chip much quicker than before. The Radeon Pro Vega 56 graphics card was running at 64C.

One minute into the test, the CPU was showing the same occasional dips to 3.63GHz as it did in previous tests, with the graphics reaching 67C.

Three minutes in, our CPU started to dip down to 3.36GHz which it never had before, and it no longer bounced back to the maximum turbo boost speed of 3.9GHZ. Instead, it maxed out at 3.63GHz. Our graphics card now reached 72C, which is quite cool for a GPU under full load. We ran the test for 12 more minutes and the results stayed essentially the same. The graphics alternated between 72C and 74C, and then stayed practically pinned at 94C with a frequency between 3.23GHz and 3.63GHz.

Unfortunately there isn't a way for us to check the frequency of the Vega 56 under MacOS, but at the end of our 15-minute test, the last graphics score we received was 1667 with an average 66 frames per second. This is roughly 10 percent lower than the score of 1831 we received when running the benchmark by itself, where the CPU isn't also being maxed at the same time.

To ensure that this performance loss wasn't due to limited CPU power going to the graphics benchmark, we monitored the percentage of CPU performance Unigine Heaven was receiving. In both the isolated graphics test and simultaneous CPU and GPU benchmarks Unigine was receiving the same 5 percent to 7 percent of processing power, meaning that a 10 percent lower score is likely from the graphics chip throttling itself in order to keep the system from getting too hot.

It's important to note that this type of scenario, where both the CPU and graphics are both running at 100 percent for an extended period of time, is extremely rare. Even editing and render RED 8K RAW video -- one of toughest tasks for any machine -- won't do that.

Along with that, the base clock speed for this Xeon 8 Core is 3.2GHz, a speed that the iMac Pro stayed above even when throwing the unrealistic maximum workload possible at the machine. The regular iMac, on the other hand, will run slower than its base clock speed -- even without maxing out the system.

With that said, it is a bit disappointing to see Apple prioritize noise over performance and thermals on a high-end pro machine. We look forward to gaining manual fan control, in order to boost the fans just a bit under normal work, to keep the iMac Pro running at its maximum turbo boost speed.
«123»