AppleInsider
Posted: May 18, 2018 3:52PM
in iPhone
From its release right up until this month's earnings announcement, analysts have said Apple will discontinue the iPhone X this year due to low sales. While the iPhone X itself might be replaced by new models and not continue for a second year, like the iPhone 7, there is no denying what Apple's premium smartphone has brought to the table. 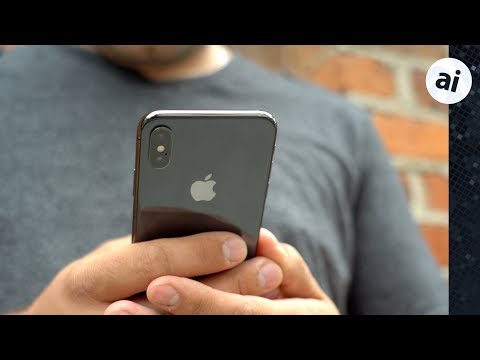 The iPhone X has recently been named the best-selling smartphone in the world during the first quarter of 2018, with the iPhone 8, iPhone 8 Plus and iPhone 7 Plus following behind. It's now about 6 months since the iPhone X's release, so let's take a look at what made the flagship smartphone such a success.

As the iPhone 8 and iPhone 8 Plus share many of the same features as the iPhone X, what made it so special? There are three reasons for this.

First, although most of us wouldn't like to admit it, owning Apple's top-of-the-line $1,000 iPhone X is a fashion statement.

You're showing the world that you can afford the most expensive mass-market smartphone available. Thanks to the iPhone X's notorious notch and large vertically aligned camera bump, it's also never been so easy to spot an iPhone X in the wild, even from a distance.

Second, the iPhone X boasts the biggest design changes ever seen in any iPhone, moving from the conventional rectangular LCD screen to a full-face OLED display with a notch, as well as being the first iPhone ever to remove the iconic Home button completely.

Many users just want something new and different from previous iPhones, and that's exactly what the iPhone X offers.

The final reason is brand new exclusive software that isn't available elsewhere, even in other iOS devices.

The X's TrueDepth Camera system now allows for Face ID and other software like portrait selfie mode, portrait lighting, and Animoji. You also get things like tap-to-wake and the new home bar, which allows for quicker app switching.

Touch ID works properly more often than Face ID, which has trouble when the user is laying in bed or if it is held at an odd angle but in most cases Face ID is much more convenient than Touch ID. Face ID just works so easily, and with the addition of being able to log into apps and use Safari Autofill just by looking at the screen, is well worth using.

Overall, Face ID has improved over time, becoming quicker and more accurate between software updates and training than when I first started using it.

After 6 months, there are a lot of third-party apps that support Face ID, like Bank of America, PayPal and Credit Karma, so it's already making my life easier outside of the Apple ecosystem.

Apple has also received a patent that could allow Face ID to scan the pattern of veins in a user's face as an extra form of authentication. If the two systems were used together, this would potentially make it almost impossible to fool, even with twins.

The iPhone X Home Bar and the device-specific gestures are extremely useful. It's never been so easy to switch between apps on an iPhone, and I find myself rarely having to open the app switcher at all.

Going back to any other iPhone is difficult, since you have to bring up the app switcher to change apps. Not to mention that the rest of the iPhone X gestures, including tapping the screen to wake the device up, would also disappear!

Wireless charging has become more convenient than we thought it would be when it was first released. We work in an office setting, which is perfect for wireless charging, and we pretty much leave work every day with a fully charged battery.

The iPhone X, along with the iPhone 8, now support charging at 7.5-watt versus 5-watt wirelessly, and Fast Charging when plugged in as well. However, you don't get a fast-charger in the box, as instead you end up with Apple's old and slow 5-watt charger that has been bundled with iPhones for years.

For fast charging, you'll need to purchase Apple's USB-C to Lightning cable and a USB-C Macbook charger. These aren't cheap, but you'll get a 50 percent charge from dead in only 30 minutes if you use them.

Honestly, it's a bit disappointing when you pay a thousand dollars for a phone, and it comes with the slowest charger you can probably find these days.

There are rumors of a new 18-watt USB-C wall charger that will ship with next generation iPhones due this fall. If this is true, either a USB-C to Lightning cable will be included, or next-gen iPhones may be equipped with USB-C charging ports.

Performance-wise, the iPhone X still tops the charts compared to the newest phones, like the Samsung Galaxy S9+. Although the Galaxy S9+ beats it in some tests due to having more RAM, the iPhone X is still more powerful overall.

When I first got my iPhone X and compared the screen to the iPhone 8 Plus, I could instantly see the difference in color, contrast, and brightness between the old LCD and the new OLED displays. Six months later, I can say that it'll be extremely hard to go back to an LCD-equipped smartphone. It just doesn't feel the same.

There is, however, a downside to the OLED screen. The color shift when looking at the display at an angle is very real, and I noticed it on the first day I had the iPhone X.

It's obviously not an issue if you're using your phone like you normally would, but you start noticing it when your iPhone X is laying flat on a table, or when you're showing something onscreen to a friend.

The X's display is still truly remarkable, and don't just take my word for it. The iPhone X won the Display Applications of the Year category at the 23rd Display Industry Awards, being celebrated as the first in the product line to "fulfill the vision of a smartphone that is entirely screen, with no physical elements, keyboards, or dedicated function buttons."

The committee said that the iPhone X's 5.8-inch Super Retina Display is the first OLED panel to match the standard set by prior iPhone generations. They praised its striking colors, true black shades, million-to-one contrast ratio, and HDR support for Dolby Vision and HDR10.

Accompanying the full-front screen is the notch, which is still a controversial addition to the iPhone X. Some hate it, and say they won't buy an iPhone with such a cutout.

What we do know for sure is that the iPhone X has sparked an interest in Android producers, with a growing number of other smartphones being introduced with notches of their own. In some cases, these devices don't even pack any kind of new technology that would make use of a notch in the first place.

In my personal opinion, if you're holding your iPhone upright - which you should be doing most of the time - it shouldn't really bother you at all.

The only times the notch bothers me is when I'm watching videos in landscape mode, or in the rare occasion that data is covered when holding the iPhone horizontally. The latter should be fixed, now that Apple is requiring all app updates to use the iPhone X display.

After 6 months, most, if not all of the third-party apps I use, now support the new aspect ratio, so I can enjoy the full-face screen experience practically all the time.

I'd have to say that the iPhone X is hands down the best iPhone ever made. In my opinion, it is also the best smartphone ever made, due to the TrueDepth camera system and the potential offered by advancements in facial recognition software.

Even so, I would caution those looking to upgrade to an iPhone X. If your current smartphone is still functional, I would recommend waiting until September, when Apple's new lineup of iPhones is usually revealed.

There are rumors of cheaper models that will have the same full-face design as the iPhone X, and who knows what else Apple could have in store for their top-of-the-line model.
«123»